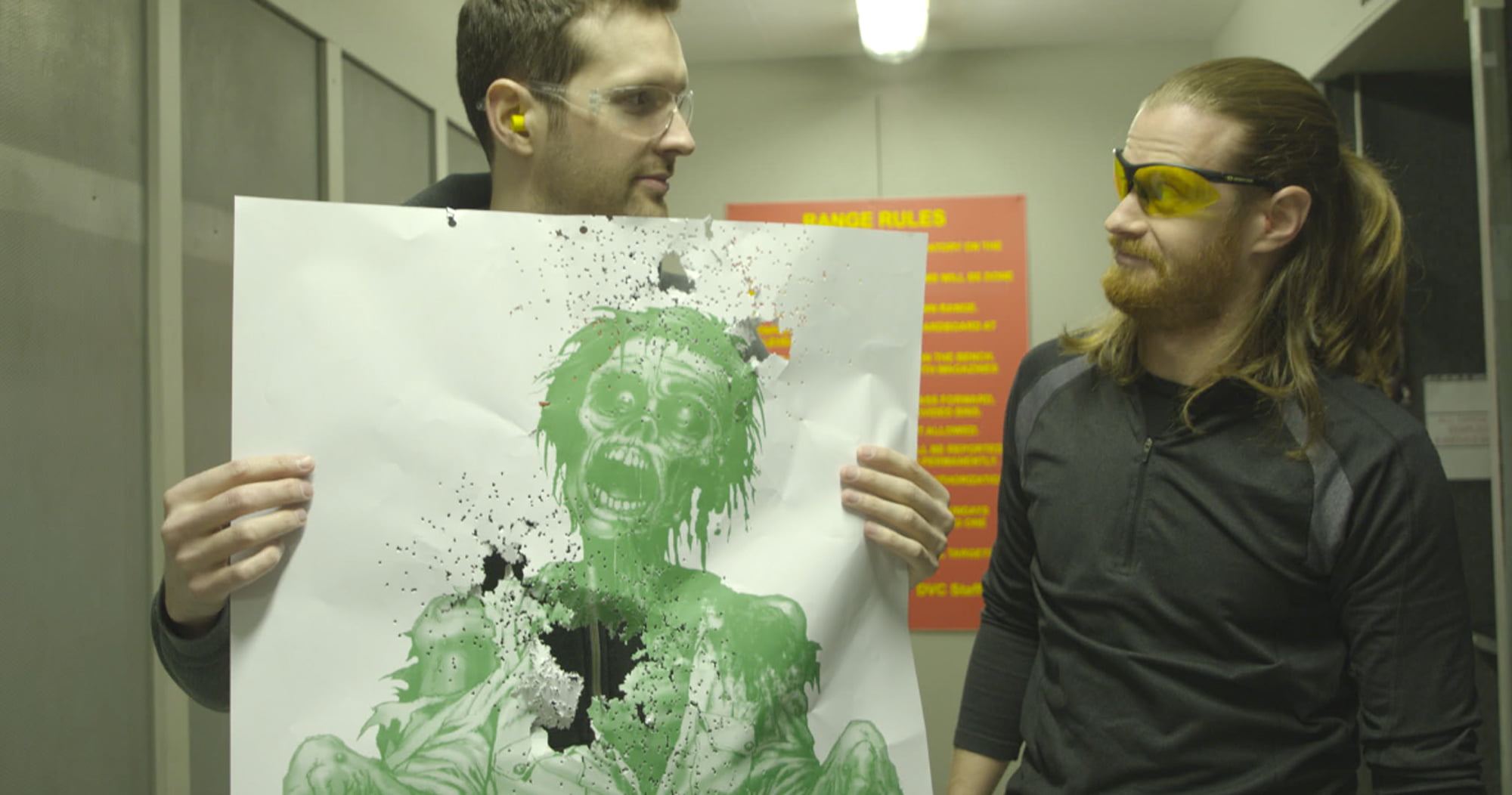 While straining credibility at times, the documentary-fictional hybrid thriller Fake Blood offers viewers a fair amount to think about while they’re gradually becoming unnerved. An intelligent and creative exploration into a filmmaker’s responsibility to society, this brainchild of Canadian director/star Rob Grant and actor Mike Kovac will offer genre buffs a few choice chills, but also make them consider some of their favourite films in a different light.

Grant and Kovac, real life best buddies who grew up together, took their love of filmmaking into their own hands by cutting their teeth on a handful of DIY splatter flicks. Often working predominantly by trade as an editor and an actor, respectively, Grant and Kovac collaborated on gory, tongue-in-cheek riffs that would occasionally get them some recognition on VOD and on the film festival circuit. One day, a fan of their film Mon Ami – a 2012 effort that Grant describes as “a cross between Fargo and Dumb and Dumber” – sends the director an email with a chillingly inappropriate video attached. In the video, an unseen cameraperson and an overly eager fan describe how they would go about dismembering and disposing of a body by going around a hardware store and listing some of their favourite tools for the job. Grant finds himself shaken by the video and suddenly questioning if his childish love of viscera and cartoonish violence could actually cause someone to hurt or kill another human being. Burdened with a newfound sense of responsibility to his audience, Grant and Kovac team up to figure out how on screen violence differs from actual violence, eventually finding themselves in a potentially dangerous situation themselves.

Fake Blood kicks off like a typical documentary would: a burning question is asked and the filmmakers set off in search of either answers or a better understanding. It leads to a handful of fun, but telling moments where Grant and Kovac realize that on-screen fights often don’t last very long, sanitized PG-13 levels of violence can often be more insulting to real life experiences of violence than blood and guts, and that Nicolas Cage firing twin Desert Eagles in John Woo’s Face/Off is hilariously implausible. But once they’ve learned about how the mechanics of movie violence differs from the real world with the help of some close friends, Fake Blood takes a sudden, sharp detour into more psychological territory, and the questions being raised start to change. 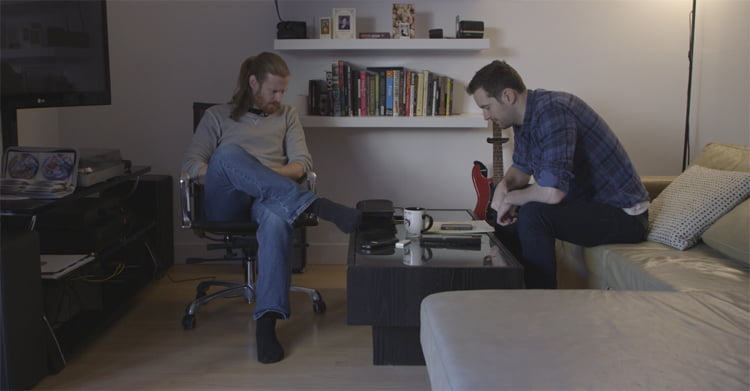 This is also the point where Fake Blood starts becoming a bit harder to buy into. Grant and Kovac turn to an ex-con – his face blurred and voice altered to protect his identity – who once worked as a “criminal consultant” on a film shoot. Grant and Kovac ask the mystery man about his past, which included working as a hired killer and muscle for some criminal heavyweights. After their chilling meeting in a parking garage, Grant becomes transfixed on one the stories told to them by their interview subject and starts poking around to discover the identity of one of the victims. When Grant uncovers what really happened starts looking at violent crimes depicted on cinema from a victim’s perspective, the filmmakers put themselves in a potentially deadly situation, and a rift develops between the best friends.

The change in the film’s line of questioning between a filmmaker’s responsibility towards depictions of violence in cinema to an everyday citizen’s responsibility to the victim of a crime leads to a logical jump in the plotting of Fake Blood that’s somewhat hard to overcome, mostly because the viewer already believes that Grant and Kovac are too smart and savvy to go down a road this foolish without getting the police immediately involved. And yet, the swerve almost works because Fake Blood never talks down to the audience. It doesn’t matter where the lines between fact and fiction have become blurred because the material itself and the people involved remain engaging.

While the general hypothesis of Fake Blood can be paraphrased using the famous quote from Wes Craven’s Scream that says violent movies don’t create psychos, but they can make psychos more creative, it’s the interplay between Grant and Kovac that always grounds the sometimes out-of-reach goals for their material in something uniquely humane and thoughtful for this sort of genre lark.

The line of questioning’s sudden change at the halfway point also raises a more intriguing observation about a filmmaker’s role in daily society. Fake Blood more surprisingly, but less believably becomes a film about the fine line between responsible and irresponsible investigative methods. The first half of Fake Blood shows that Grant and Kovac are adept at making a low-fi documentary about violence because it plays into their unabashed love of genre films. The film’s high-stakes second half works because quite cheekily Grant and Kovac prove to be less than stellar documentarians. I never fully believed that the peril Grant and Kovac find themselves in was genuine or all that plausible, but I did believe that Grant and Kovac wanted to genuinely depict an investigation that has gone out of control. Fake Blood isn’t a perfect film, much like Grant’s other works as a filmmaker, but it’s certainly an entertaining one that’s got some brains to it.

Check out the trailer for Fake Blood: