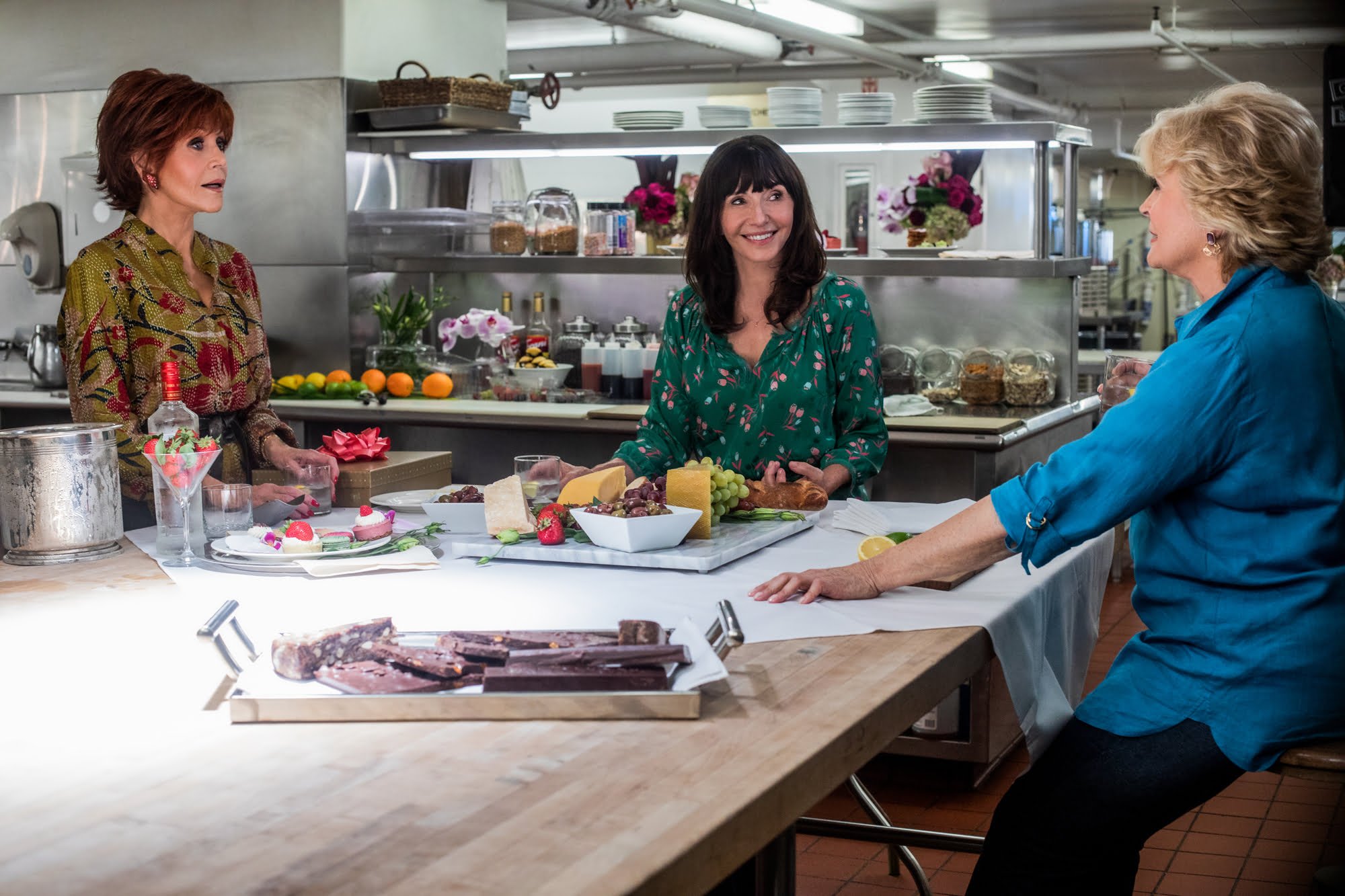 It’s a testament to the talent and professionalism of the leads in the mature-skewing romantic comedy Book Club that this raggedy film works at all. It’s not a well made movie by any stretch, chock full of basic filmmaking missteps that are hard to overlook, but it’s definitely a funny movie, sometimes uproariously so. Every ounce of charm and mirth comes from the cast, and they make an otherwise wildly uneven film into something reasonably entertaining.

Since the 1970s, four lifelong best friends have dutifully convened a monthly book club meeting. It was started by Vivian (Jane Fonda), a wealthy hotel magnate with a “love ‘em and leave ‘em” attitude towards relationships. Diane (Diane Keaton) is a homemaker and recent widow who’s looking to move on with her life, but her frightened, paranoid adult daughters (Katie Aselton, Alicia Silverstone) want to bubble wrap and protect their aging (but still fully capable) mother. Carol (Mary Steenburgen) is a restaurateur who’s once passionate husband (Craig T. Nelson) has become aloof, distant, and limp in the libido department.  Sharon (Candice Bergen) is a well respected judge who never got over her divorce to a doofus (Ed Begley Jr.) decades prior, and is hesitant to get back into the dating game. Like most book clubs, their get-togethers are more of an excuse to drink wine and catch up than they’re about discussing the merits of whatever they just read. But when Vivian makes her buddies read 50 Shades of Grey, something is awakened inside them, and they begin to change their romantic standings for the better.

Book Club is the feature directorial debut of producer and frequent Robert Redford collaborator Bill Holderman, and while his sometimes witty contributions to the script (co-written by Erin Simms, another frequent Redford collaborator) are more frequently funny than not, it’s clear that this is a project that’s getting by on star power alone. Although the plot diverges awkwardly into four concurrently running rom-coms, every scene where the four leads are hanging out are so effortless and engaging that a whole movie could be made out of watching them throw the script out the window and shooting the shit. The comedic capabilities of Keaton, Steenburgen, Fonda, and Bergen are unparalleled, even when Holderman can’t quite figure out just what to do with this embarrassment of riches.

Book Club opens with a rapid fire, minutes long explanation of every character’s backstory narrated by Keaton’s character, and it’s an early, rough sign that the film to follow might be in trouble and in a hurry to reach the finish line. A groove is settled into shortly after that, but upset once again when each diverging plot thread starts crashing into each other. When one woman’s story is being told, Holderman, without any good reason for doing so, will cut to a different story for a few minutes, and then he’ll cut back to what they were talking about ten minutes ago, picking up exactly where he left off. There’s comedic momentum thanks to the sharpness of the one liners, set pieces, and the cast’s general ability to perform anything put in front of them, but Holderman’s erratic storytelling chops lead to a film that frustratingly starts, stops, and stalls every few moments.

Not all of the stories are all that great, either. Steenburgen’s arc is one of typical sexual frustration, complete with Viagra jokes, boner gags, and Nelson delivering oblivious entendres. That story doesn’t go anywhere new, and it certainly doesn’t get the most screen time, but it does build to the funniest and most likable conclusion. Bergen has even less to do once her character starts online dating (once with Richard Dreyfuss, once with Wallace Shawn, both of whom are underutilized) and coming to grips with her ex suddenly marrying someone equally dull that’s easily half his age. Bergen’s great, and it’s great to see her in a major motion picture again, but she’s often forgotten about and shifted to the side. 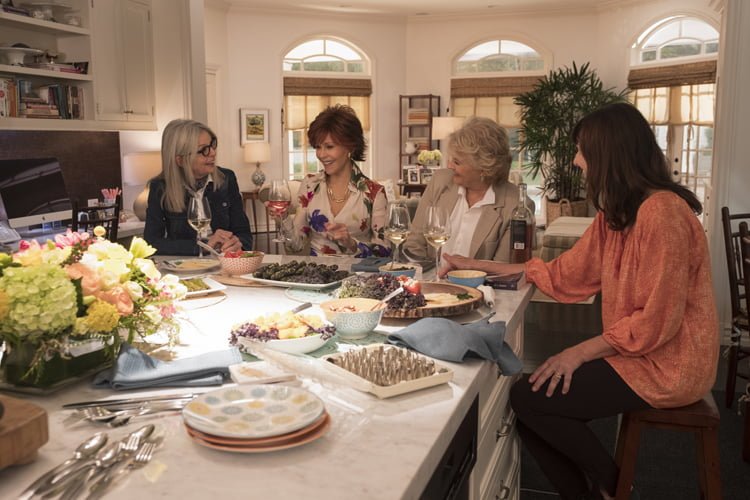 Keaton and Fonda are the proper leads here, and their romantic arcs are meaty, but Keaton’s makes much more sense than Fonda’s. Keaton is paired opposite Andy Garcia, playing a smooth talking pilot she’s carrying on with in secret and away from her protective daughters. They have a wonderful back and forth, and it feels like watching the early days of a relationship blossoming into something greater. Fonda, on the other hand, has equally great chemistry with Don Johnson, playing a charming former fiancée of Vivian’s who suddenly resurfaces, but nothing about their relationship makes any sense. It’s never clear why Vivian is so opposed to commitment or why they don’t immediately hook up again, so everything about their storyline feels like Holderman is just killing time until an inevitable conclusion.

Every story escalates in jumps, like giant swaths of the film have been excised judiciously and without consideration for what makes sense or is in the film’s best interest. There’s also a sense that Book Club has been edited down from a tough talking, Hard-R raunch-fest into a more genial and profitable PG-13 movie for general audiences. Unlike this week’s Deadpool 2, I wish that Book Club had embraced its nasty, freaky side a bit more. The wholly obvious sex jokes contained in this film are onto something revolutionary. We could use a sex comedy about old people that’s actually funny and insightful, and if this went the extra mile, it could have been a career altering high point for everyone involved. Instead, it’s just pretty good and kinda edgy.

And unlike the ladies of Book Club who are still stunningly gorgeous, Holderman’s film isn’t much to look at or listen to. Some of the film’s obviously ADR dialogue sounds like it was recorded in a wind tunnel or while someone was on their phone en route to an airport. Anything involving any sort of visual effect – even scenes where it might be cheaper to not use visual effects – often involve usage of green screen that’s so shoddy it makes The Room look polished.  And everything is filmed in a useless soft focus (usually with a shaky handheld camera) that seems to suggest anything brighter and more colourful might sear the retinas of the target demographic. In terms of directing and storytelling acumen, Holderman can only go up from here, and his Book Club cast saves him every step of the way.

Book Club could have been awful and pandering, but there are also signs of a much better film in here that’s yearning to break free. It’s fine for what it is, and probably better than something with this thin of a premise has any right to be. Everyone in front of the camera brings all the energy and talent they can devote to the project, but everyone behind the camera seems confused by what they’re doing. The cast makes it watchable and entertaining, but I’d hesitate to say that it’s more than just an okay waste of time.

Check out the trailer for Book Club: