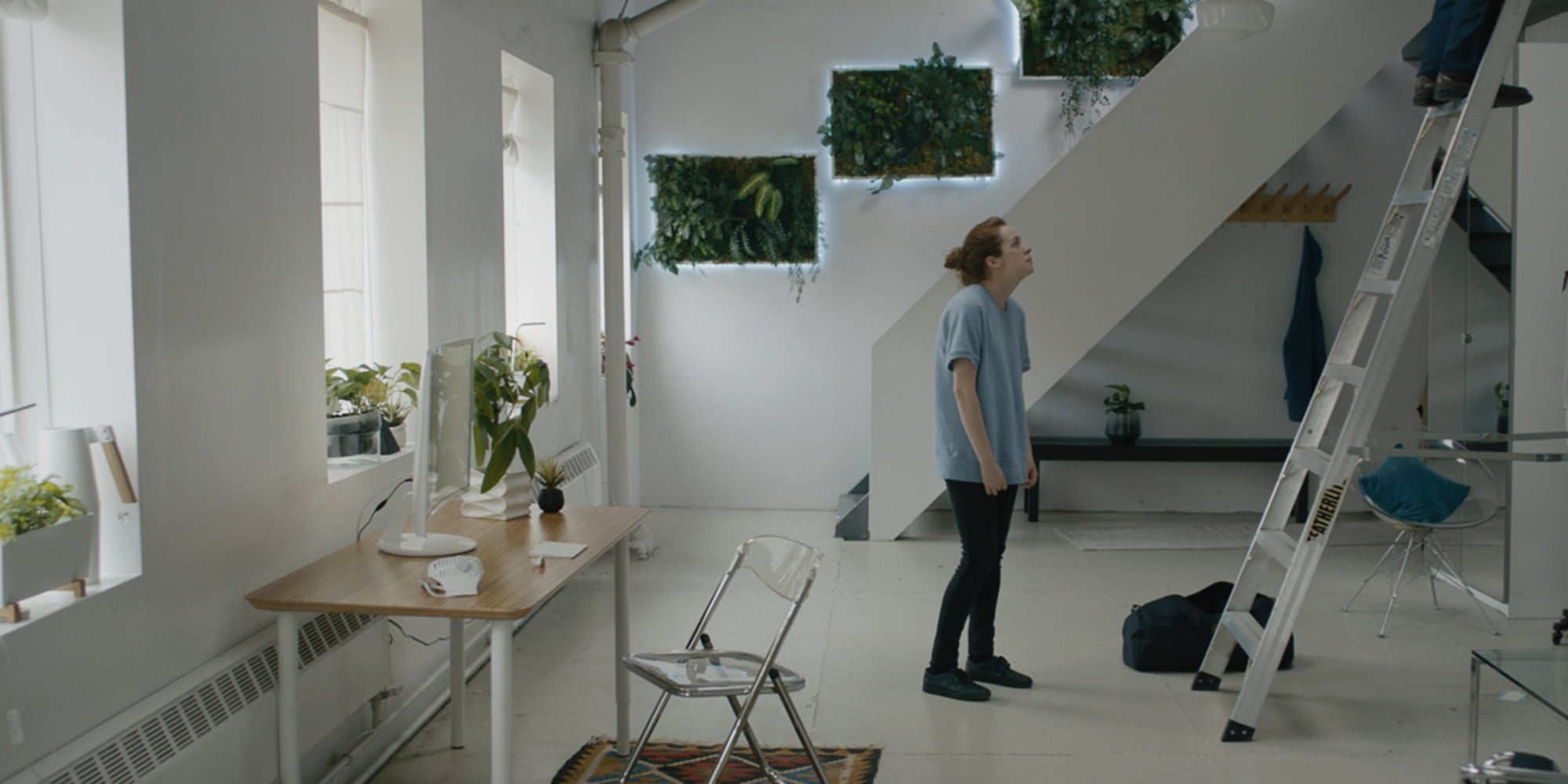 Filmmaker, writer, and stage veteran Zack Russell didn’t exactly know that he was creating a dystopian film when he set out to make his latest short, 7A, which premieres at the Toronto International Film Festival this week. It began as a specific idea about the sometimes bad or difficult choices that human beings make every day that could be shot in a single day on a minimal budget, and it ended up becoming a stripped down dystopian parable.

7A, the latest team-up between Russell and star-slash-co-writer-slash-frequent collaborator Kayla Lorette, is simple to describe, but hard to parse in great detail without giving too much away. A woman (Lorette) alone in her pristine, almost all white apartment is preparing to film a video blog when she’s interrupted by the arrival of a repair man (fellow theatre vet Tom Rooney). He’s there for a scheduled repair, but what happens during his time inside the woman’s apartment will play into the ideas and concepts that Lorette and Russell wanted to explore.

Russell, who won a Canadian Screen Award for his previous short film collaboration with Lorette (She Stoops to Conquer), stopped to talk to us about his surreal and timely new work.

Your star, Kayla Lorette, is also your co-writer for this. What was your collaboration like on this film?

Zack Russell: This is the second film that Kayla and I have made together, and this one sort of began in a weird place. It came out of this crowdfunding campaign that we did for our last film, and to do one of those you have to make these videos that are this kind of direct address to the camera explanations as to why people should give us money. (laughs) We were doing that, and we got the idea about telling a story from the perspective of someone who was doing one of these videos. The entire visual idea really came from the lead up to our last film. Where we ultimately got to ended up very different from where we started, but this film definitely started from that shared experience we had, watching her talking into the camera and to no one person in particular.

I love working with Kayla, and I really thrive on collaboration. I honestly hate writing alone, and directing and writing are usually pretty solitary things, so it’s nice to have somebody to talk to, to bounce ideas off of, and to make you feel less crazy. (laughs)

I can assume that coming up with a film like this can be difficult because it’s built around this dystopian idea that I don’t really want to spoil. It’s not immediately apparent that it’s a dystopian film from the start, and even more questions are raised once we see that it is. When you’re making a short film around such an idea, how hard is it to know how long you need to keep that core concept a secret?

Zack Russell: For me, restraint is an important part of my own taste when it comes to something like this. I kinda get turned off sometimes by dystopian stories where there’s a lot of detail about the world, and you have to learn so much about what’s been going on and all of its idiosyncrasies. I really just want to be pulled in with a character right away. I want to relate right away, and I want to watch something that isn’t immediately recognizable. I want the details to sneak in gradually.

Because this was a short film, our thought was just to make everything look and feel as normal as possible for as long as possible. Given our super low budget, we never wanted to potentially turn anyone off with bad or shoddy dystopian details. There’s a bit of an economic thing, too, where you think it would be wonderful to have all these grand visuals, but there’s something to be said about not having any money to do something like that. You have to be kind of judicious and slow with the details. You have to make the audience care about what they’re watching before telling them that the world they’re seeing is a little bit different.

With the exception of the auto-focusing camera, most of the film is told from a single, locked-off camera shot. For you, what was the challenge of trying to create a space that could tell this story, while still offering you plenty of visual possibilities within that single frame?

Zack Russell: Well, my background is very much in the theatre, so I think my comfort level is constantly set to “people moving in a wide shot.” (laughs) Blocking for me is something that I really appreciate. I like to have the actors’ movements tell parts of the story. You let character come through in the way people move, which is a very theatre-y thing to do. We don’t have camera movement in the theatre, and we don’t have many of the amenities that working on a film has. That came pretty easily to me, and Kayla and Tom Rooney, who’s the male actor in this, both have a lot of stage experience. For us, it was a natural thing to do.

It also came a bit out of my own experiences of waiting around for so long while a camera is getting set up. I knew that we were only going to shoot this in a day, so I wanted to do away with that because we all knew the constraints going in. I wanted to just find an apartment with this list of seven things that we needed it to have for the story to work, and where all of them could be in one shot, so we could spend the entire day acting and rehearsing instead of setting things up.

How hard was it to also find such a location with all those prerequisites that was as pristine, vibrant, and almost sanitary looking as the one you found?

Zack Russell: There was definitely a lot of location scouting, and it wasn’t an easy find. It was hard, but we were helped by having a lot of input from our DP Henry (Sansom). We wanted to use natural light, and we kind of had to because of what we had to work with, so that became our guiding rule for the whole thing. I think that the film doesn’t know what it is until “the thing” happens, and we wanted to honour that. We didn’t want to tilt our hand too early, so we wanted to make as many choices that played against what we knew was going to happen, and hopefully that builds the suspense and makes the audience want to know what’s going to happen. But when you want to play against those sort of dystopian standards to make people wonder about where we’re headed, choosing the right apartment for that material and our particular set up was a major part of the project. What kind of place would this person live in and how do we drop visual hints about where this story is heading and not lean too heavily into what we on the other side of the camera already know? Henry and I knew that we just needed a nice, light, and bright place to do that.

I want to try to broach this subject without spoiling the film, but I think there’s something interesting that this film says about how people react in times of great crisis, and it’s certainly timely. Were there any world events that were happening while you were coming up with this that influenced the story?

Zack Russell: That’s a good question, and I think that’s definitely there if you look into it. The film isn’t expressly about this, but we were definitely starting to make this in the months after Donald Trump had been elected, and there was this real sense that lots of people felt that they had done something wrong, or there was something that they had somehow overlooked that allows something like that to happen. There was this feeling of regret, and I think subconsciously we were definitely thinking about this sort of collective, societal crisis, and people who wanted to change what they’d done. And I kind of wondered what it would be like if someone was given another chance, and that’s one of the questions the film looks at in its own very specific way. If you do make a mistake, or if you react with an impulse that you aren’t super proud of, or one that feels amoral to you, would you really change given another opportunity? That was the question that really guided me through the whole thing.