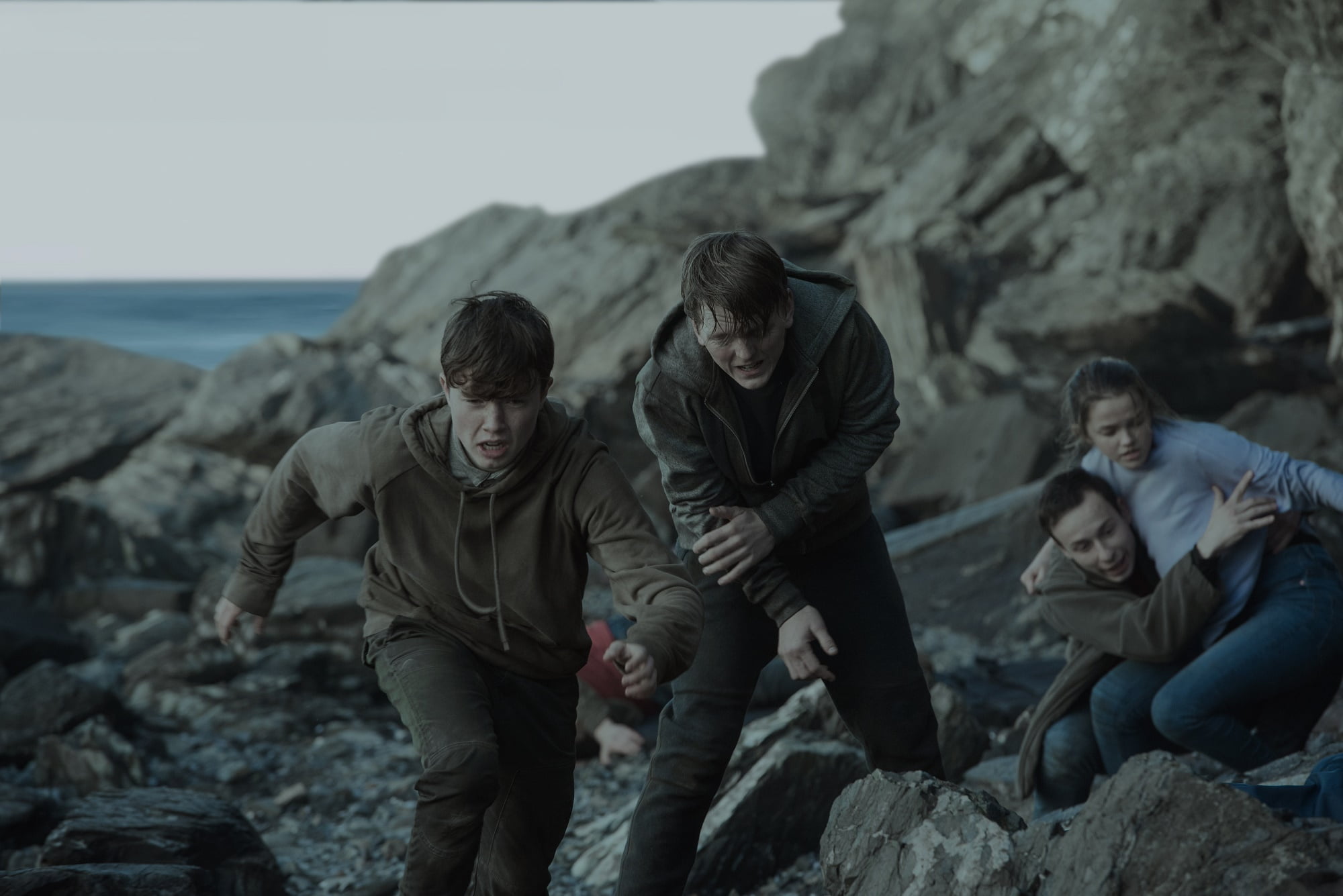 Writer-director Paul Greengrass is quite familiar with mounting reality based stories of everyday people suffering through physical and emotional tortures (Captain Phillips, United 93, Bloody Sunday), but his latest effort, 22 July, mines unspeakable tragedy for a more poignant, incendiary, and thought provoking look at everyday freedoms that some take for granted, and others try to twist to fit their own sickening ideologies. It’s a film made by someone who clearly has a fire in their belly and a grave concern about the fate of democracy around the world. While some might bristle and say that Greengrass’ purposefully miserable, but ultimately hopeful approach somehow exploits the victims and families who lost lives during one of the most unconscionable acts of terrorism in global history, it’s all in service of a larger point: that the freedoms people hold dear in a democratic society are imperfect, but capable of keeping larger evils at bay. It’s a work of equal parts confrontation and hope.

22 July looks opens with a series of Oslo terrorist attacks carried out by loner white extremist Anders Breivik (played with frightening conviction and eminently detestable aplomb by Anders Danielsen Lie), which included a mass shooting at an island based youth leadership camp. After he’s taken into custody alive by the authorities, the killer’s rampage had killed 77 people and wounded 200 others, most of them defenceless teenagers. The shooter decides to turn his day in court into a media circus, forcing an unwilling, but duty bound labor party lawyer (Jon Øigarden) into defending his freedom of speech and turning the trial into a delivery tool for his hateful, arrogant propaganda. As the trial approaches, one of the young victims called upon to testify against the Neo-Nazi (Jonas Strand Gravli) struggles through an arduous and mentally fraught rehabilitation process.

Greengrass – once again operating in his inornate and immediate handheld style – only focuses on the harrowing attack off the top. It doesn’t take long, but it feels like a gut-wrenching eternity. Never revelling in the horror or attempting to mine such an unspeakable act for cat and mouse thrills, Greengrass stages the nastiest and most sickening sequence of his career. But that’s the point of it all. Greengrass wants the viewer to understand the severity of what happened without sugarcoating it.

The purpose of such shocking footage is to underline how Anders used his democratically afforded rights after the attacks to further inflict damage and trauma onto a grieving nation that he derides for forcing whites to live in a multi-cultural and multi-racial society. There’s always a keen sense that the killing was only the beginning of Breivik’s message to “the Marxists, liberals, and the elites.” Like most politicians seeking places of importance, Breivik has learned the art of rhetoric from fellow, like-minded individuals, and he’s more than willing to martyr himself. He might be acting of his own free will, but the performative nature of his evil has been created in a societal incubator that can embolden and push such people across lines that should never be crossed. Breivik is the personification of pure, undiluted evil; the only person truly proud of his actions. With 22 July, Greengrass wants viewers to look Breivik in the eye – much like the brave young people who testified against him and the country’s resolute and cautious Prime Minister (Ola G. Furuseth) – and confront him with strength, dignity, and righteous anger.

While the early going of 22 July is the type of cinema Greengrass always excels at, the focal shift to parallel stories about the terrorist, his lawyer, and the survivors are timely, complex, and fruitful depictions of a tragedy’s aftermath. Øigarden delivers a quietly simmering and brooding performance as Breivik’s put upon counsellor. A family man known for taking on freedom of speech cases, he’s forced into becoming a limp and ineffective puppet for a madman bent on shoving his twisted ideologies down the throats of the Norwegian public. Øigarden can only convey disgust with simple glances, uncomfortable body language, and subtle intonations that suggest his heart really isn’t in defending an already knowingly guilty and prideful client. In many ways, the character and real life person it’s based on serve as reflections of every compassionate and thoughtful global citizen in the wake of a tragedy. 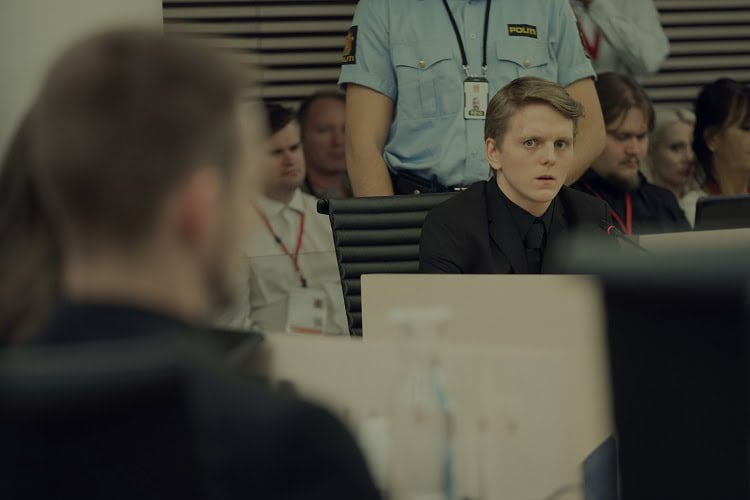 Similarly exceptional is Gravli, who offers a victim’s perspective on the themes of democracy and due process brought out in 22 July. He’s driven by a sense of righteousness and justice, but he’s also broken, traumatized, and physically struggling to get a normal life back. Breivik’s trial is like any other where victims testify against abusers, assailants, and attempted murderers, but it’s magnified to a global perspective thanks to the nature of the crime and person who committed it. Greengrass always frames Gravli’s recovery process as an enormous one; placing the young man in open spaces or larger rooms where there’s possibility for growth and movement, but the character can’t overcome the thickness of the air around him. His struggles with his parents and his friendship with a fellow survivor (Seda Witt) offer the film a strong and humane backbone amid all of the larger issues that Greengrass wants to discuss.

While he’s often heralded as a visual filmmaker first and foremost, 22 July boasts Greengrass’ most intelligently written and composed screenplay to date. The various storytelling shifts between characters are expertly interwoven onto the film’s thematic fabric. Adapting Åsne Seierstad book One of Us for his own take on the events, Greengrass has made a parable for the ages about the clear and present dangers to democracy, freedom, and equality that are threatening to destroy the world as we know it. It’s not exploitative as many of the film’s harshest critics claim (although it is strange that the film has a Norwegian cast telling a story of their country in English), but it’s wholly meant as a cautionary tale in the grimest sense. Greengrass wants to show that while democracy offers plenty of chances for extremists to build their platforms, the same core beliefs can be used to give such threats to liberty just enough rope to hang themselves with. He’s not giving Breivik’s views a renewed platform or forcing anyone to relieve horrible events needlessly for the sake of entertainment. Greengrass wants viewers to look inside themselves and look back on the state of the world today in its harshest, and perhaps most necessary, terms.

It’s not Greengrass’ most viscerally thrilling film, but that’s part of its design and impact. 22 July wants to put viewers through the emotional wringer, and begs of its audience to examine the true reasons why it hurts so much. It’s a story of fighting through enormous pain and anger for the hope of a better future.

22 July opens in select cinemas and is available on Netflix starting Wednesday, October 10, 2018.

Check out the trailer for 22 July: