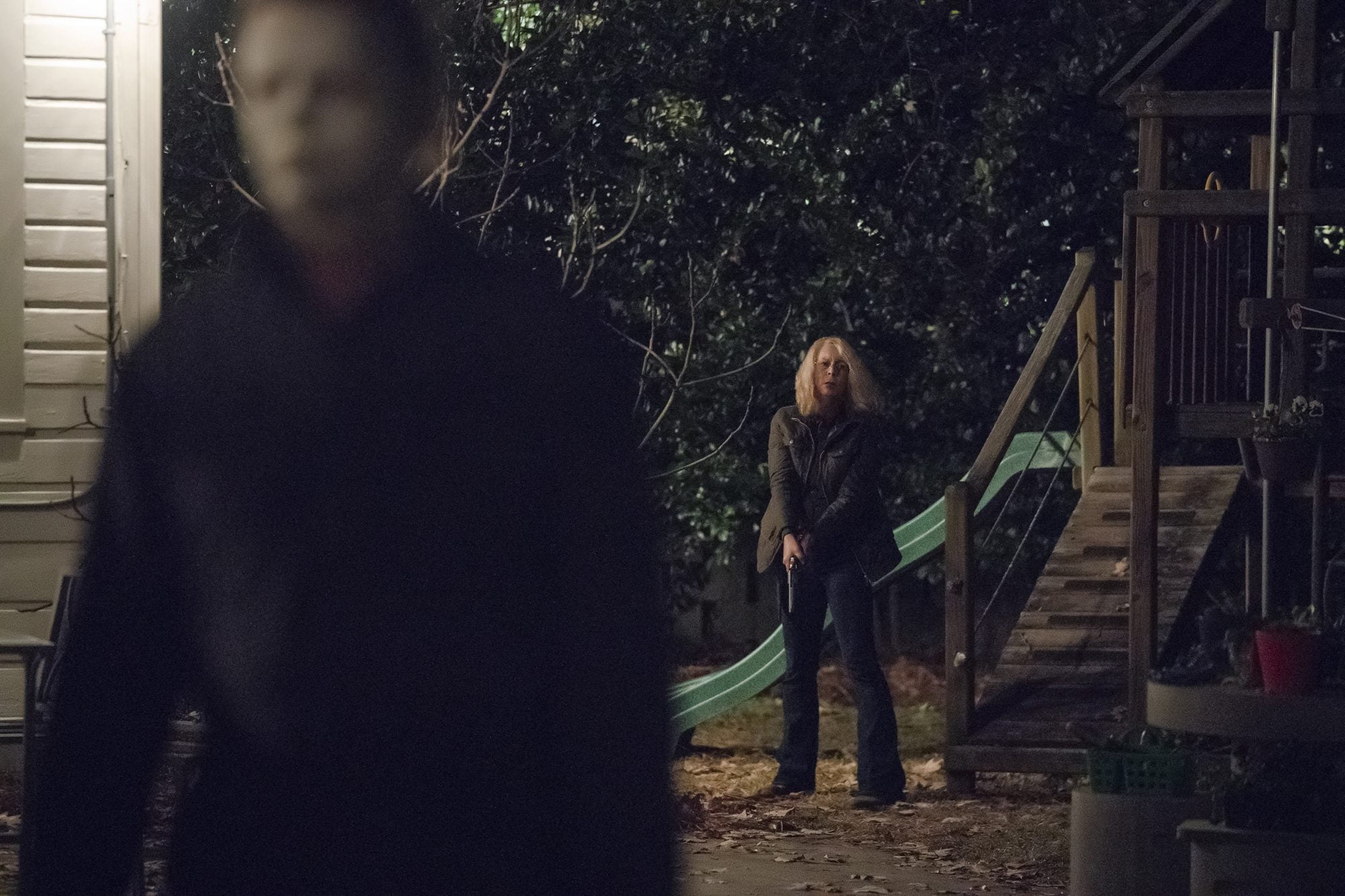 David Gordon Green’s heavily hyped and anticipated remake of John Carpenter’s 1978 horror movie classic Halloween takes an old standard, makes some intriguing tweaks, slaps on a new coat of blood red paint, and serves up a nifty balance of old school slasher movie shocks mixed with admirable, post-modern upgrades. In what’s essentially the fifth hard reboot of the lengthy franchise – which is far too many for almost any series to sustain and remain relevant – Green pays homage to Carpenter’s original vision, while simultaneously being the only sequel or spin-off to enhance its major recurring characters in any logical sort of way. It’s still just another slasher sequel, but at least Halloween 2K18 has more earnest and thoughtful ingenuity than all eight of the other series entries to feature Shatner masked killer Michael Myers have put together.

Ignoring anything that wasn’t the 1978 original, Green’s take on Halloween opens with a true crime podcaster (Jefferson Hall) paying serial killer Michael Myers a visit at a high security mental hospital before he’s due to be transferred to a new facility. Hoping to get to the bottom of what drove Michael to go on a killing spree forty years prior, the “investigative reporter” and his producer/co-host (Rhian Rees) make it a point of travelling to Haddonfield, Illinois – the site of Michael’s massacre – to track down survivor Laurie Strode (Jamie Lee Curtis). Laurie, who’s made numerous attempts to get over her trauma and survivor’s guilt over the past decade to almost no avail, has heard about Michael’s impending transfer, and is ramping up the fortification efforts on her home and remaining at a state of constant preparedness and vigilance. Laurie is clearly distraught and broken, something that places a heavy amount of concern on her adult daughter, Karen (Judy Greer), and teenage granddaughter, Allyson (Andi Matichak). Of course, Michael’s ill fated prisoner transport is due to go down on the titular holiday, and all of Laurie’s worst fears are about to become a reality.

Director and co-writer Green is a curious, but well fitting choice to helm a Halloween sequel, as are fellow writers and frequent collaborators Jeff Fradley and Danny McBride (yes, THAT Danny McBride, who’s an accomplished scribe in his own right). Green has primarily made three kinds of films: quiet, introspective, and intimate dramas (All the Real Girls, George Washington, Prince Avalanche), character driven Oscar bait (Stronger, Our Brand is Crisis), big budget stoner comedies (Pineapple Express, Your Highness, The Sitter). He’s an auteur in the sense that his visual sensibilities rarely change between projects, but the tone and tenor of his films tends to vary wildly. Halloween might represent the biggest departure from Green’s eclectic norm to date, but he also proves to be more than up to the task.

Green’s sensibilities mesh nicely with the set of rules Carpenter laid out for his characters in the original Halloween. Michael Myers (played by a combination of stuntperson James Jude Courtney and actor/regular Carpenter collaborator Nick Castle, who’s reprising the role for the first time since the original) isn’t an unstoppable killing machine, but he’s forceful, fearful, and ferocious just the same. Michael, a.k.a. The Shape, hasn’t changed very much in terms of his slicing and dicing abilities, but it’s known early on that beneath the hulking exterior, the killer is nothing but a pathetic looking old man. As his karmic counterpart, Laurie looks equally haggard by design. Instead of framing Halloween as just another franchise sequel, Green and his writers mount a tale of two people on a collision course for closure. While I’m sure someone will demand another sequel if Green’s latest entry becomes a smash hit, there’s always a sense of finality given off by both characters. There’s a feeling throughout that only one of them can survive, and Green and his team do a fine job making sure that viewers are never certain who’s going to end up coming out on top. It’s the most natural and least forced pairing of these characters in decades.

Green, a filmmaker who isn’t known for forceful displays of suspense, uses every trick up his sleeve to sell the intensity of Halloween. Leaning into his film’s updating of John Carpenter’s iconic, evocative, and deceptively simplistic musical score at every opportunity, Green directs with a serpentine sensibility. Nothing about Halloween is static, but it’s also never chaotic. Visually, Green and cinematographer Michael Simmonds have made an ominous film that reflects perfectly the slowly stalking and perpetually driven nature of the killer and the constantly vigilant nature of his greatest foe. Sure, Green knows his way around the film’s handful of gory set pieces (which are more gruesome than the original, but still focused more on the bloody aftermath of violent acts), plot twists (many of which are predictable, but effective in a crowd pleasing sort of way), and setting the stage for a new story (via one of the best opening scenes in any film this year), but it’s the director’s dexterity that makes Halloween such a delight. Green puts his authorial stamp on the events at hand, but remains in lockstep with Carpenter’s original. While Carpenter might not have had a huge impact on this Halloween, Green leaves the horror icon’s fingerprints all over the scenery, only ever one-upping the series creator via a bone chilling tracking shot where Michael’s rampage begins unnoticed as crowds of trick or treaters roam the autumnal streets. 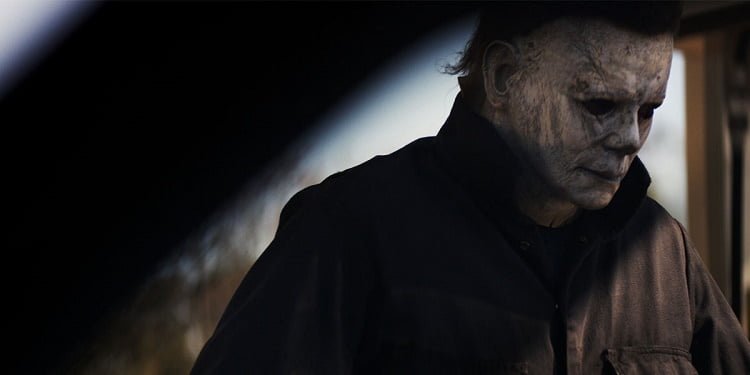 Unfortunately, the fact that Green remains so reverential to Carpenter’s groundwork and framing means that Halloween is destined to feel like nothing more than a very good sequel. I suppose when the original film in question is one of the most critically and commercially revered horror films in history, there are worse things to be, but there isn’t much about Green’s Halloween that strikes as daring or all that original after the first thirty minutes or so, which is a shame since the set-up suggests something a bit more interesting than the aging killer versus an aging group of final girls trajectory and groove the material eventually settles into. While the addition of true crime podcasters is a cheeky modern updating, there’s also a surrogate character meant to stand in for the original’s Dr. Loomis (Haluk Bilginer, nicely filling the shoes left by Donald Pleasance) and yet another befuddled local sheriff (Will Patton), both of whom feel like stock sequel characters from any number of horror franchises. There’s a bunch of side characters serving as unwitting bait for the killer, most memorably and hilariously a wise cracking child (Jibrail Nantambu, stealing every scene with gleeful, foul mouthed aplomb). There are some in-joke nods to missteps made by previous sequels, but nothing this film can do will shake the memory of the sheer number of times these characters have been ridiculously resurrected. It’s like getting a really great meal from a chain restaurant. It’s well crafted, made by people who care from the most basic of ingredients, and you’d happily order it again, but it’s hardly life or game changing.

But for her part in providing a link between Halloween’s past and present, Curtis commits fully, delivering some of her best work in a long time. Finally getting a chance to embrace and run with Laurie’s understandably traumatised psyche, she’s more compelling and chilling to behold than her enemy. Curtis also boasts exceptional chemistry alongside rising star Matichak (who herself puts a refreshing spin on the tiresome teenager in danger act) and Greer’s consistently put upon and fed up daughter. As the film progresses, the film belongs just as much to Greer (who’s also given her best role in quite some time) and Matichak, and their chemistry isn’t in service of building bridges to future franchise pictures, but to enrich the story’s increasingly weighty life or death struggle. By the time Green arrives at his film’s rousing and raucous final showdown, all of them are given interesting character notes and tasks to accomplish, sending things out on the highest note possible.

Green’s Halloween handily unseats every sequel, reboot, or remake that came before it, and while it won’t do much to erase or rewrite the franchise’s sloppy, cluttered history, it’s one of only a handful of these kinds of films to feel like a necessary follow-up to an iconic original that took audiences by storm and force. It’s still ultimately a film that’s not much more than “fine for what it is,” but at least it’s never talking  down to the audience.

Outside of shifting cultural tastes, the reason audiences don’t get the same number of slasher movie sequels today that they got in the latter quarter of the 20th century is because people got fed up of soulless, reheated stories that felt like they were made by directors and actors on autopilot and funded by producers who were practically tallying the box office receipts before the final credits rolled. While many of Michael Myers’ famed villainous contemporaries have failed to inspire much enthusiasm or good will with their rebooted efforts, at least audiences can rest easy knowing that at least one of these characters has returned to their spooky roots. Whether or not this Halloween will inspire others to follow in Green’s footsteps remains to be seen, but a solid effort is still appreciated almost as much as a revolutionary effort when it comes to this type of material.

Check out the trailer for Halloween: