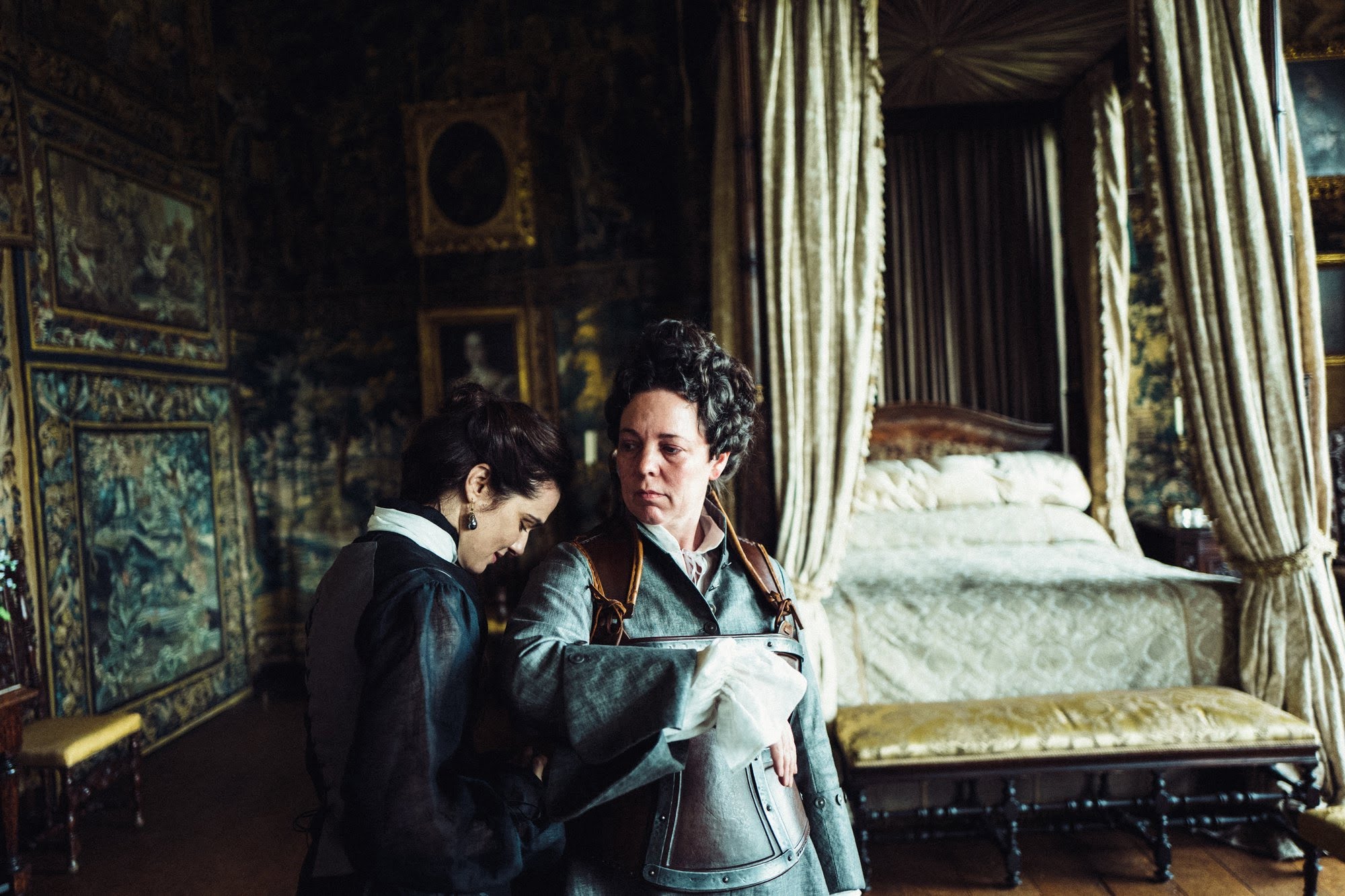 Caustically witty and masterfully performed, the costume satire The Favourite elevates the art of backstabbing and social climbing into a twisted artform. Boasting a trio of strong leading performances and an unwavering commitment to discomfort and loose morality, the latest from director Yorgos Lanthimos is a refined work of comedic nastiness and pointed social commentary. The Favourite is as dry and haughty as straight, fine vermouth, as decadent and forbidden as foie gras, and as sharp as an antique rug studded from end to end and seam to seam with thumbtacks.

Lady Sarah (Rachel Weisz), the closest companion to the frail, but demanding Queen Anne (Olivia Colman), has been living a comfortable and lavish life while her war hero husband (Mark Gatiss) toils on the front lines. Sarah has recently been gifted her own castle by the Queen, and anyone with an ounce of political knowledge or influence understands that the easiest way to get to Anne is through her best friend. This seemingly unbreakable bond is put to the test with the sudden arrival of Abigail (Emma Stone), Sarah’s cousin, who was once a woman of some nobility, but fell out of favour when her father went insane. Now begging Sarah for even the lowliest position in the Queen’s court, Abigail has to begin her social ascent anew. Sarah reluctantly agrees to bring Abigail on for any number of demeaning tasks, but quickly the younger cousin’s resourcefulness and attentiveness catches the eye of Anne. Although Anne and Sarah have a deeper relationship than most of the queen’s subjects realize, Abigail is simply a nicer person. With Sarah growing more paranoid and entitled, she starts to get pushed out of the queen’s life slowly, but surely. This shift in allegiances is noticed by Harley (Nicholas Hoult), a power hungry young politician who gets his hooks into Abigail and basically demands that he help influence the queen’s decisions, something Sarah had previously refused to indulge in favour of the whims and policies of his rivals.

The Favourite is a story of constantly shifting allegiances and dirty deeds carried out in the name of self preservation. Whenever a viewer thinks that one character is actually becoming somewhat likable or sympathetic, it’s only a matter of moments before they commit increasingly unspeakable acts of emotional and political treachery. If a character has started off unlikable, they’ll likely stay that way until their redeeming and humane traits are finally expanded upon and put to (mostly) noble use. If someone is pushy or misanthropic, there’s usually a rational explanation to explain their boorishness. Just when you think you know one of the characters well enough, they’ll do something that’s shocking, but plausible given the circumstances. None of the Lanthimos’ many character swerves feel like rug pulls, but rather like simmering conclusions brought to a full boil. The Favourite is packed with characters who’re only thinking about themselves, but the thought process itself is detailed, rich, and reasoned thanks to the exemplary script from first time feature screenwriter Deborah Davis and television veteran Tony McNamara.

Since his debut feature in 2001, The Favourite is the only feature that stylishly strange and deadpan Greek auteur Lanthimos (Dogtooth, The Lobster, The Killing of a Sacred Deer) has directed, but not written, which is mostly a positive. The Favourite boasts material so shockingly perceptive about avarice and the ways human beings can coat their cruelty in kind gestures that it hardly needs any tinkering to work as a piece of costume cinema. Lanthimos knows that his leads are all more than capable of making Davis and McNamara’s words sing with sarcastic wit. The production design and costuming are also, perhaps unsurprisingly, exceptional for a period piece where people are often caked in makeup, sores, mud, blood, and shit. Lanthimos’ primary job here is to provide a steady hand and sense of pacing, and he’s more than up to a task thanks to a devilish and confrontational sense of humour that’s well within his directorial wheelhouse.

But on a visual level, Lanthimos’ distance from the material itself causes him to overthink his staging. While the decision to employ natural lighting and appropriate levels of British opulence are spot on, Lanthimos’ lets Irish cinematographer Robbie Ryan make the bizarre decision of shooting The Favourite as if it were a music video. The all too frequent employment of panoramic fisheye lenses to give viewers a rapid layout of every room, courtyard, or scenario is a choice that’s both unfortunate and annoying. The sets are stunning, the actors captivating, and the materials are strong, so forcing the viewer to watch large swaths of the film as if they were gazing into a crystal ball doesn’t do The Favourite any favours. It’s one of the best films of the year to be saddled with a wholly unnecessary gimmick. 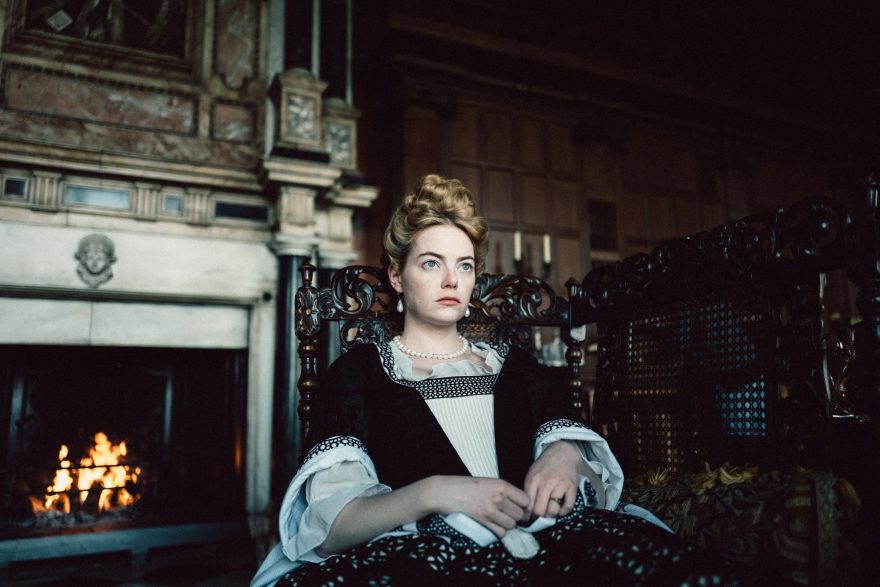 That’s ultimately more of an aesthetic pet-peeve than a damaging criticism when Lanthimos still has leads as dynamic and challenging as Weisz, Colman, and Stone. Weisz has the character boasting the greatest deal of consistency overall, and The Favourite becomes the rare example of a film where the grounding force is a thoroughly unlikable person. While Colman’s frail monarch and Stone’s screwed-over socialite boast undulating, overlapping arcs that look like radio frequencies meeting only in specific points, Weisz provides the unwavering baseline the other actors occasionally cross. Lady Sarah doesn’t wish to be liked by anyone other than Anne, and she lives by a strict code that’s never broken, even when her position at the foot of the queen’s bed seems to have been usurped. She’s capable of much nastiness, but there are some depths she refuses to reach. It’s a difficult performance, and an arguably one that directs the action as much as Lanthimos does behind the camera, even when the character isn’t on screen.

Between The Favourite and her appearance in the underrated Netflix miniseries Maniac, Stone has been having a great year as a performer with against-type roles. Lanthomos knows exactly how to frame Stone’s performance here, initially setting Abigail up the kind of likable and friendly character the actress has largely made her career on thus far. As Abigail’s quest to become the queen’s titular servant and bedroom partner becomes morally dubious and less than altruistic, viewers still want to give Stone and her performance the benefit of the doubt because the character has been placed into opposition with Weisz humourless and conniving aide-de-camp. Stone will make viewers hate the character the longer the film goes on, but the actress’ ability to coat the material’s poisonous barbs with sugar is nothing short of revelatory.

As good as Stone and Weisz are, they’re still not as exceptional as Colman’s queen, a character so uniquely flawed, humourous, and tragic that Chaucer might rise from the grave simply to kick himself for not thinking of such an archetype first. Although Colman has a fair share of sequences where her queen pitches fits and temper tantrums over not getting her way – which is pretty much a standard of films involving female royalty that’s subverted nicely here – all of them are the result of profound sadness in this woman’s heart. Anne treats people terribly, but while Abigail and Sarah are allowed into the queen’s private life to hear her biggest fears and secrets, the viewer is the only person in the room not trying to exploit such moments of tenderness and relatability for their own gain. Anne will rail and bluster with great fury, but she’s also the only person in The Favourite who can justify their actions to the audience without caveats. It’s a note perfect balance of comedic and dramatic work that takes full advantage of the actress’ underrated skill set.

The Favourite boasts a sense of humour that might be an acquired taste, but it’s written in such a profoundly unique way that the film would hold a great deal of interest even if the viewer doesn’t find it particularly funny. The Favourite wants to draw complicated emotions out of the viewer and force them to react accordingly. Whether viewers feel stimulated by the material’s subtext about feminist notions of class and inclusivity, they laugh at the outlandish amount of bad behaviour, or they find the whole lot of it off-putting and repulsive, The Favourite has accomplished its task. It has made the viewer engage with the material in ways they probably won’t expect, and that’s the hallmark of a very good film, indeed.

Check out the trailer for The Favourite: