Digitally remastered and enjoying a renewed and frightening sense of relevancy, the 1982 documentary The Atomic Cafe initially saw release just as cold war tensions between the United States and Russia were reaching a terrifying fever pitch. Stitched together from various primary sources, The Atomic Cafe looked back on the escalating nuclear arms race with equal parts fear, criticism, and humour. It encapsulated a time when the threat of a nuclear holocaust was thought to be a stark, realistic possibility, and The Atomic Cafe was released just as such fears were starting to take root once again. Now with the Trump administration locked in a perpetual standoff with Russia, Iran, and North Korea, there’s no better time for The Atomic Cafe to receive yet another examination and reassessment, because the more things change, the more they seem to remain the same.

Directors Jayne Loader and Kevin and Pierce Rafferty begin more or less at the beginning; looking back on the American use of atomic bombs to put an emphatic stop to their engagement with Japanese forces during World War II. After devastating the country into surrendering, the Americans – although happy with their victory – attempted to ignore the impact their creation had on the state of modern warfare. They foolishly believed that no one else in the world would want to possess such a destructive force, and by 1949, two years after the cold war with Russia had noticeably intensified, their biggest rivals possessed the bomb. After the atomic bomb came the hydrogen bomb, and once again, not long after the Americans had completed their latest super-weapon, the Russians created one of their own. Tensions rose throughout the 1950s and 60s, and suddenly Americans feared that such a weapon could be used against them, leading to a deluge of government propaganda, preparedness videos, misinformation, pop culture related jingoism, and hysteria.

Loader and the Raffertys constructed The Atomic Cafe from various period sources: archival interviews, educational filmstrips, military training videos, news reports, photojournalistic sources, advertisements, stock footage, and government propaganda all factor into the picture. What emerges is an expertly structured, but playful alternate timeline of the cold war arms race that starts in a logical place, escalates at the same pace as history, and ends at an ambiguous point that feels just as unresolved in 2018 as it did in 1982 or 1968. The result is a documentary that’s hasn’t lost an ounce of its depressing, thought provoking, truthful, and darkly hilarious nature, and a unique piece of scholarship that outlines the various ways human beings will lie to themselves in a bid to excuse their egos and justify fears they helped to create in the first place.

In the wake of the Trinity Tests, the bombings of Hiroshima and Nagasaki, and successful Bikini Atoll experiments (which basically railroaded an entire generation of indigenous peoples into giving up their way of life to better the American war effort), people spoke lovingly about the joys of nuclear weapons without paying much attention to the human cost. As the audio portions of interviews skirt the issue of health risks associated with nuclear fallout, the filmmakers look at the unflinching gruesomeness left behind in the wake of such attacks, on both humans and animals alike. It was ignored then, and ignored even further once government organizations began suggesting that there are “acceptable limits” of radiation that imported foods and beverages could contain and still be deemed safe for human consumption. 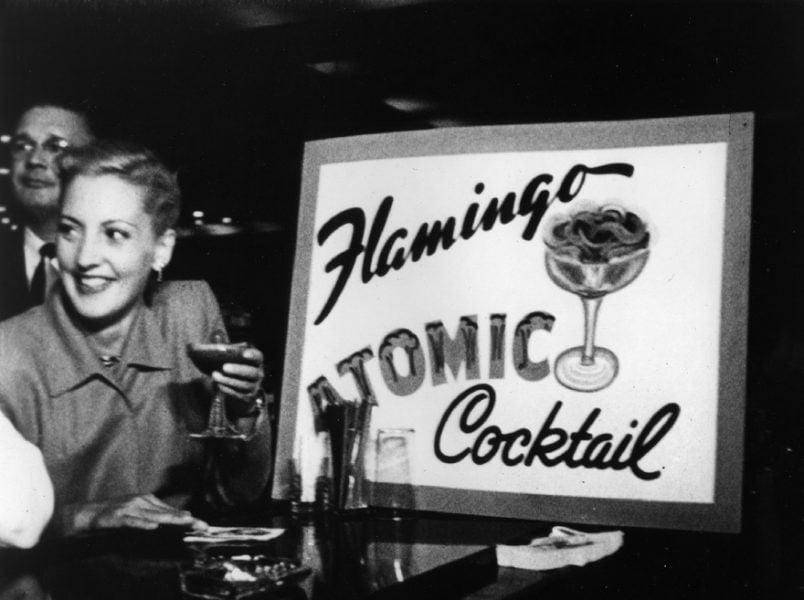 Once their own creation comes back to bite them in the ass, Americans found themselves with new fears that they doubled down on, believing that, while their version of the bomb was better than anyone else’s, they should prepare for the worst just in case. Parents started to think about getting their children fallout protecting suits that looked like giant oven mitts and were lined with shredded lead. Small towns would enact passion plays of sorts where they would pretend their communities had been invaded by Communist forces. Defenders of capitalism would hilariously espouse views that the buying power of the American public was the only thing keeping the country from falling victim to the Reds. 4-H clubs across the country would teach their young members how to create preparedness kits for long nuclear winters in the family bunker. Whenever the wind kicked up following nuclear tests on American soil, radio broadcasts would interrupt their scheduled programming to say that everything was fine, but that no one should leave their home for the next hour or so “just in case.” Bert the Turtle taught children in schools everywhere to “duck and cover,” while various pop ditties sang lovingly about America’s military might and righteous cause.

While some of the specific elements of The Atomic Cafe were already passe at the time of the film’s release in 1982, the prevailing spirit of Loader and the Raffertys’ documentary remains just as potent. Today, as it was in 1982 and 1949, America remains blissfully fearful, unprepared, and overly confident when it comes to the prospect of nuclear strikes. Kids aren’t being trained on what to do once the bombs start dropping in the middle of the school day (probably because the threat of mass shootings remains a more plausible and sickening threat), and people aren’t sipping atomic themed cocktails while listening to their favourite musical artists crooning about our love for the bomb, but we might not be that far off from a return to those days. The Atomic Cafe expertly depicts the ways that humans who feel afraid, boxed in, and forgotten about will gravitate towards anyone boasting an authorial voice for guidance. Whether that person or group of people have anything intelligent or thoughtful to say is irrelevant. Much like the bomb, it’s the size, impact, and sounds being made that count the most.

Gorgeously given a 4K restoration overseen by the filmmakers and recently added to the National Film Registry, The Atomic Cafe remains a concise, intelligent, and exceptionally edited documentary where history more or less hangs itself by using its own words. It’s relevancy hasn’t diminished in the slightest, and while some of the footage employed throughout The Atomic Cafe is certainly a lot funnier today than it was both thirty or seventy years ago, the fears that created such footage and sources haven’t funny gone away. Instead of acting as a curious time capsule, once again The Atomic Cafe gives audiences a stark portrait of where we might be headed once again in the not too distant future.

The restoration of The Atomic Cafe screens for one night only at The Hot Docs Ted Rogers Cinema in Toronto on Thursday, December 20, 2018 at 6:30 pm. It’s also currently available on DVD and Blu-Ray.

Check out the trailer for The Atomic Cafe: