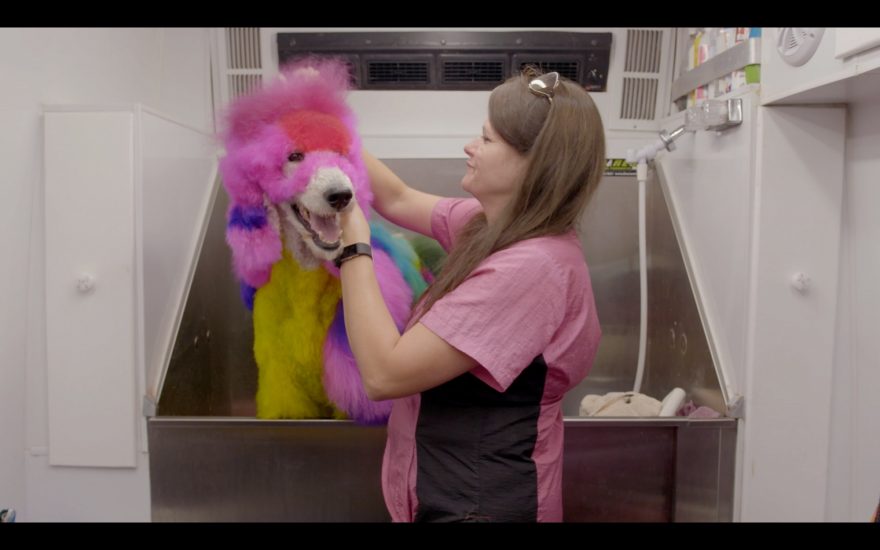 First time feature documentary director Rebecca Stern’s humorous and empathetic Well Groomed takes a look at the niche world of creative dog grooming; the art of dying the hair of pooches different colours and shaving intricate designs and characters into their fur.

Well Groomed is a relatively standard sort of documentary that follows various contestants of varying skill levels and temperaments from all over the United States – including Angela Kumpe, the queen of creative grooming – in good times and bad. Stern looks at the intense preparation of the participants, the criticism they face from concerned members of the public, and how they overcome personal setbacks and fears in pursuit of victory at the year’s biggest creative grooming event in Hershey, Pennsylvania.

There’s a definite love displayed by these owners for their dogs, and the creative skills on display are certainly impressive and amusing, but Well Groomed assuredly won’t win over any detractors who remain skeptical about taking such artistic license with a living creature. Any potential controversies surrounding the practice of “furjazzling” (which is illegal in some states) are batted away early and quickly, and the question about whether creative grooming draws more attention to the owner or the dog remains somewhat unexplored by Stern in favour of a feel good vibe throughout.

Criticisms aside, however, Well Groomed is confidently assembled, gorgeously photographed, and certainly effective in its aims to entertain, building to an appropriately cathartic and somewhat bittersweet conclusion for many of Stern’s subjects. If the subject interests you or you have little knowledge or opinion on the subject, Well Groomed is a fun time. If you take issues with such grooming practices, you should probably steer clear.