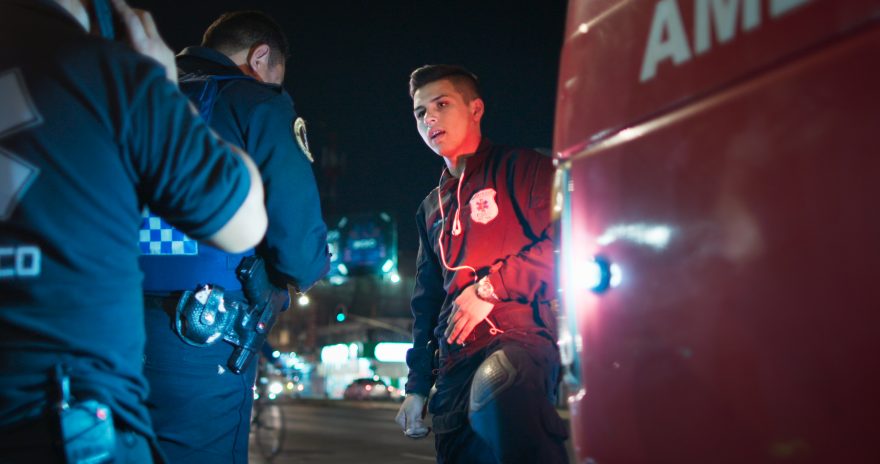 Thrilling throughout, occasionally heartbreaking, and sometimes even darkly comedic, Midnight Family, director Luke Lorentzen’s verite look at Mexico’s broken healthcare system, is a modern day parable about the dangers of increased privatization and the corruption that takes root where governmental oversight used to be.

In Mexico, a country of over nine million people, there are only 45 government owned and operated ambulances. The slack is picked up by loosely and bizarrely regulated private ambulance companies who literally race each other on the roads and risk their own lives for work. For the Ochoa family of Mexico City, owning and operating an ambulance is their only source of income. Most of their patients are in need of urgent care and are unable to wait hours for a government ambulance to arrive. Many of them can’t pay the fees for their hospital transport, and the Ochoas often have to wait outside the hospital for patients to be released if they want to collect. On top of that, some police are cracking down on these private contractors and demanding kickbacks from ambulance operators.

Midnight Family embeds itself with a strong family unit who’s barely scraping by below the poverty line, and while viewers might be torn on the overall altruism of the Ochoas, there’s a definite understanding being fostered by Lorentzen that things are tough all over in Mexico. The Ochoas, some of whom are far too young to be tasked with saving lives on a regular basis, always try to do what’s best for the patient, but at the end of their overnight shifts, helping their fellow citizens in need doesn’t put food on the table or keep a roof over their heads. They’ll provide care and comfort, but they’ll also gently demand payment or take patients to less busy and more expensive private hospitals in hopes of getting referral fees.

The push and pull between charity and profit as depicted in Midnight Family is thoroughly captivating, and the situations depicted are sometimes harrowing, but overall Lorentzen’s film works best as an observant, cautionary tale looking at the pitfalls of privatization and the needy people it could leave out in the cold.