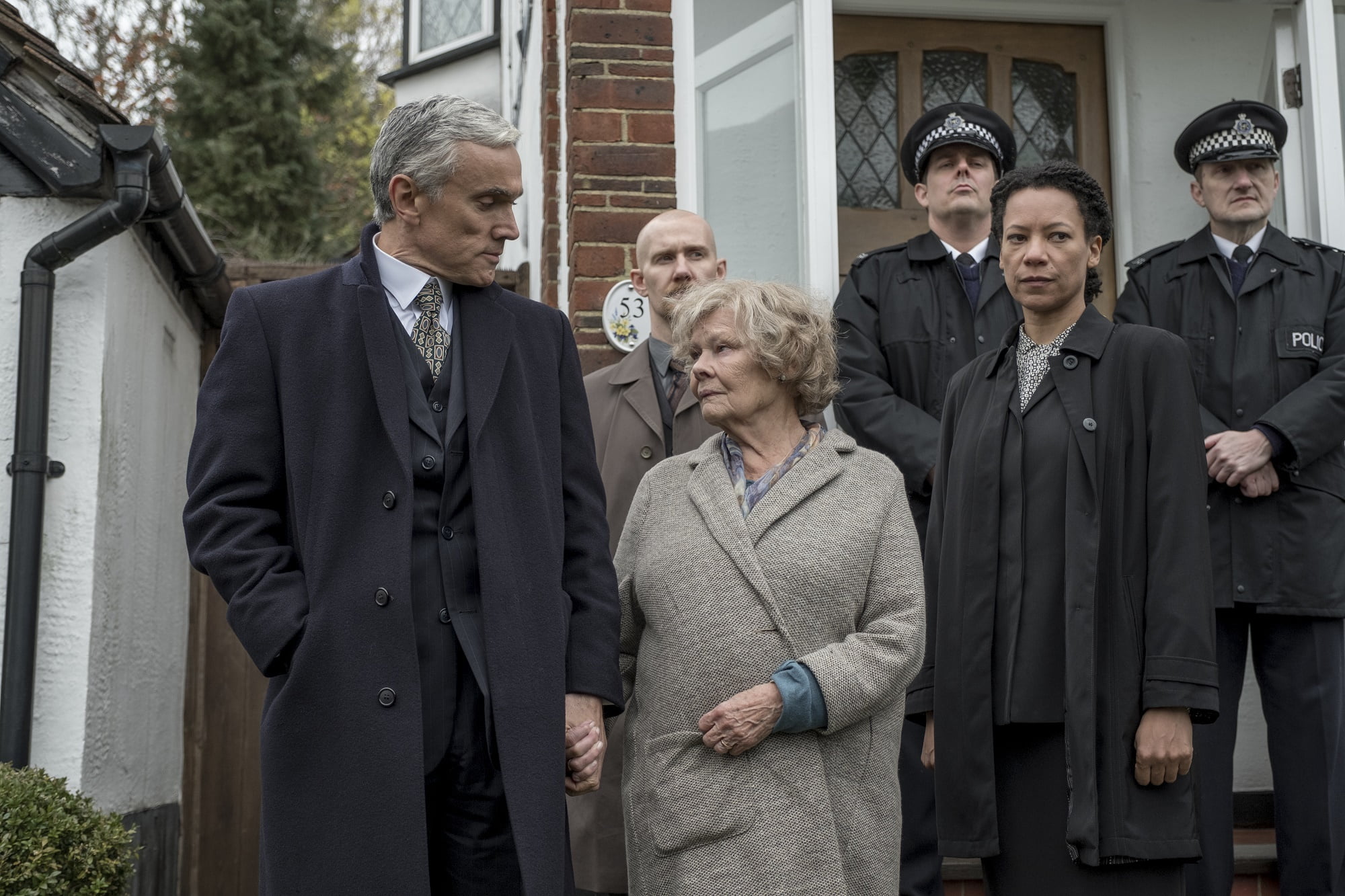 A bland, flavourless mash of spy thriller, family drama, and historical romance cliches stitched together without any sort of regard for larger social or dramatic context, Red Joan is a muddled movie made up of background noise and broken parts. Inspired by the true story of Melita Norwood, a British KGB spy who remained uncaptured until she was in her nineties, and based on the novel of the same name by Jennie Rooney, Red Joan shouldn’t be this dull, aimless, and slapped together. It’s a corker of a story told without a shred of conviction through dreadful writing, uninspired sub-television direction, and confused, unenthusiastic performances.

Red Joan opens in the year 2000 when the seemingly harmless Joan Stanley (Judi Dench) is arrested by MI-5 on 23 counts of treason, espionage, and conspiracy, dating back to her time spent at Cambridge University as a physics major just before the start of World War II. Director Trevor Nunn and screenwriter Lindsay Shapero (both of whom have extensive television backgrounds) cut back and forth between old Joan’s largely useless and uninformative interrogation session and flashbacks to her younger self, played by Sophie Cookson, who has more screen time than Dench (whose investment here is at a bare minimum), but only slightly more to work with.

Joan befriends a wild child classmate (Tereza Srbova) who brings her to a Socialist movie night. There, she becomes smitten with her friend’s cousin, Leo (Tom Hughes). It’s hard to make much of anything out of this on screen relationship because it’s reduced by Nunn and Shapero to nothing more than a handful of pat political conversations, light snogging, and Leo constantly referring to Joan as “my little Comrade” while she makes googly eyes at him. Through a series of maddeningly vague and convenient plot points centring around Leo’s German nationality and the outbreak of World War II, the lovers are separated. It should mean something, but Nunn and Shapero have no desire to make Red Joan with any degree of patience or restraint. The couple are separated, there’s a scene where Joan complains to her friend about the situation, and the very next scene after that shows them reuniting. Then, the scene after that finds them immediately separated again. This whole sequence of events, which most dramatists would play out a bit longer to provide added character and emotional depth, takes up maybe ninety seconds of Red Joan. 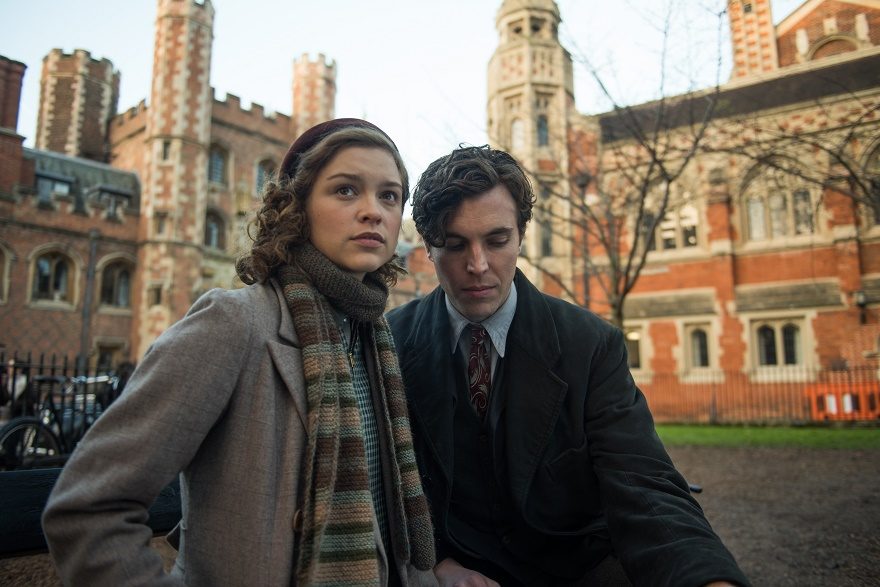 Red Joan is the kind of directionless mess that’s made by people who seem like they’re in a hurry to get people out of the theatre. That same pattern of plotting plays out continually throughout the story, making for a maddening experience where caring about the characters becomes impossible, and their motivations for doing anything are frustratingly vague. Red Joan isn’t a film about the creation of a spy, loves lost and found, or an old woman expressing regrets and finally speaking her truth to the world. It’s a film where people do things simply because the screen would remain blank otherwise. The pacing is so zippy that it’s hard to keep up with the racing timeline, but Red Joan is also so paradoxically dull and poorly constructed that it feels like it’s taking an eternity to unfold.

Eventually, young Joan is offered a position with the scientific intelligence branch of the British military to help develop and atomic bomb at the height of World War II (not that one would even know a war was going on around her, since the low budget has been entirely sunk into costuming and period decor). She uneasily agrees to help funnel plans for the bomb to Leo and his Russian allies, but instead of examining her true reasons for doing so, Red Joan instead turns on a dime from an inept spy thriller into a weak romantic love triangle, as Stanley starts shagging her older, married superior (Stephen Campbell Moore). Anything that could’ve been remotely interesting or suspenseful is put on the backburner and eventually goes up in smoke in favour of a chaste, hopeless romance that couldn’t catch fire on the face of the sun.

It looks fine and the actors do a fine job shouting their dialogue at the top of their lungs in the place of actual emotions, but overall Red Joan is as pedestrian and mediocre as filmmaking tends to get. Red Joan is a strange blend of mechanical, inhumane writing and direction combined with a strange and misplaced sense of moral ambiguity. Is Joan doing this for love or out of a sense of duty? Is she being forced into this position or is she the victim of subtle conditioning? Is she being used or is she doing this out of kindness towards the people she loves? Red Joan never bothers to parse any of these questions, instead content to film scene after meaningless scene in workmanlike fashion. Towards the end, Dench’s older Joan blurts out some degree of motivation (which is underlined in the film’s laughably bad final scene by Joan’s barrister son, played by Ben Miles, who gets saddled with the worst character in a film filled with awful, ineffective characters), but it doesn’t make a lick of sense because any evidence to support that theory hasn’t been placed into the film itself. Nunn and Shapero should’ve ended Red Joan with Dench throwing up her hands and saying “I did it because I felt like it” and then smash cutting to the credits. That would’ve made more sense than anything offered up by the filmmakers.

Outside of the cinematography (which is rather good) and the production design (which was clearly done on a shoestring budget and is better than this movie deserves), Red Joan fails spectacularly in almost every other department. There’s no suspense, no lust, no political backbone; heck, there isn’t even a moral, a resolution, or even anything worth thinking about once it all wraps up. The casting and storyline suggests that Red Joan has been made with older moviegoers in mind, but I honestly don’t know what the audience would be for this film. It’s not for fans of Dench, who’s maybe in ten total minutes of the film. It’s not for war or spy movie buffs. It’s not for anyone in the mood for true crime or a classic romance. Any audience one could think of for Red Joan is bound to be let down by the film’s utter carelessness. It’s an almost perfectly awful movie.

Red Joan opens at Varsity Cinemas and VIP in Toronto and Fifth Avenue Cinemas in Vancouver on Friday, May 3, 2019. It opens in Montreal on May 10 and expands to additional Canadian cities throughout the spring.

Check out the trailer for Red Joan: