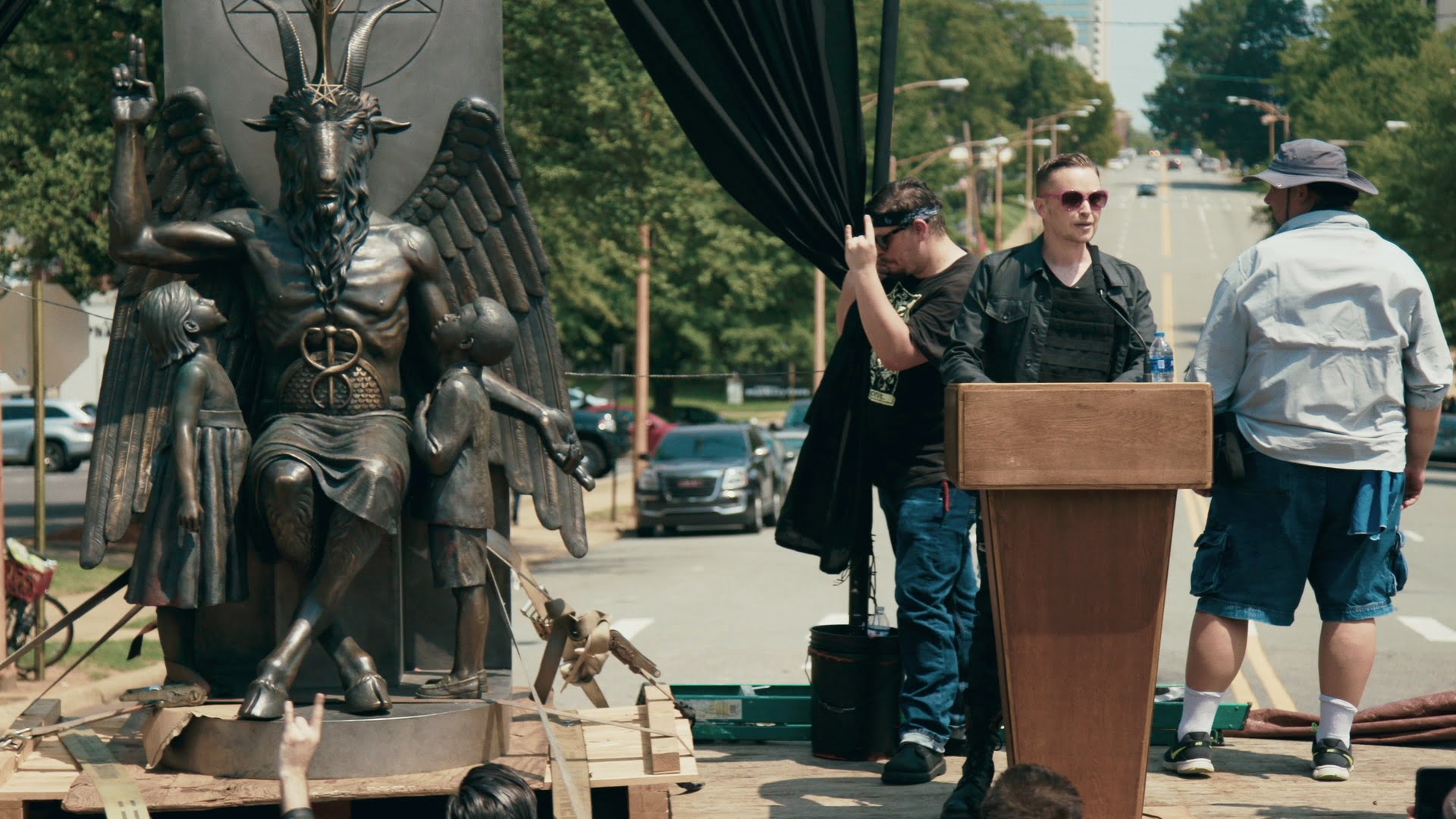 Documentarian Penny Lane’s Hail Satan? takes a look at a new breed of social activist that disguises itself as a church of sorts and claims to worship Christianity’s most evil figurehead. Not so much a film about religion, but an entertaining and morally slippery look at people who go to great lengths to point out social and political hypocrisies, Hail Satan? is a decent primer on modern day activism, including all of its potential pitfalls.

Although its membership has grown exponentially in recent years, The Satanic Temple, headed up by the impish, enigmatic, and socially conscious Lucien Greaves (along with two other founders who don’t wish to have their faces shown on camera), has only been in operation since 2013. Rallying behind Satan as the ultimate symbol of nonconformity and rebelling against tyranny, Greaves and his followers see blasphemy as a declaration of personal independence. While they conduct black masses on occasion (and even a gay themed “pink mass” at the gravesite of Westboro Baptist Church asshole Fred Phelps’ mother), their main goal is to point out that America isn’t a Christian nation and that its society should be inclusive to all faiths, sexual orientations, and viewpoints. It sounds rather wholesome, but their tactics and their seeming allegiance to the biggest villain in all of organized religion has made their job harder. A black mass in Boston finds some members of the Catholic archdiocese comparing The Satanic Temple to the KKK, and in Phoenix where they protest the reading of a Christian blessing before every city council meeting, they’re talked about in the same vein as ISIS.

Hail Satan? looks at these devil’s advocates and their history as an organization in a fair and balanced light. On one hand, The Satanic Temple isn’t all that wrong about Christian intolerance, but on the other, they’re obviously trolls trying to get a rise out of people who would get worked up over their protests. These aren’t Satanists in the hedonistic Anton Lavey sense. They’re pretty much a Reddit thread come to life or Anonymous; a group of like minded people banding together to provocate and shake people out of their complacency. They use transgressive imagery, but there’s nothing altogether evil about the happenings depicted in Hail Satan?. 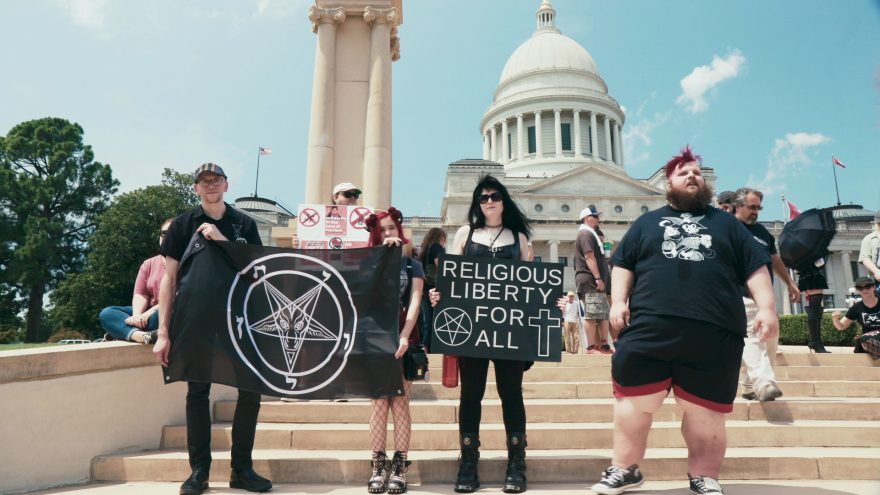 The increase in its membership also offers some unique, if not altogether unexpected problems for the organization. More followers means added bureaucracy, which is in many ways the antithesis of personal liberty. This bureaucracy means nationwide chapters that were previously allowed to operate autonomously are now subject to a set of guidelines and standards that need to be met and maintained. It also means increased media appearances from a group comprised of people who are notoriously media shy, despite the theatricality of their demonstrations.

Hail Satan? is another change of pace for Lane (Nuts!, Our Nixon), an exceptional documentary filmmaker who always finds new ways of reinventing herself. Hail Satan? might be her most standard documentary overall, but the issues at hand are the most complex that she’s tackled to date. The Satanic Temple, based out of Salem, Massachusetts at the moment, is a fascinatingly diverse group that isn’t overwhelmingly white and male. Most of these people have known religion in their lives and grew a distaste for the righteousness and intolerance that can manifest in its most fervent and backwards of followers. Structuring Hail Satan? around two obviously linked primary threads – the desire to tear down statutes of the Ten Commandments in front of municipal buildings in Oklahoma and Arkansas, or at least place a statue of the goat headed Baphomet next to them in a nod to religious inclusion – Lane looks at the passion these people have in their fight to point out the silly rigidity of indoctrinated faiths that should be separated from the state.

While Lane understands that most members of The Satanic Temple are standing up for what they believe in, she’s also able to criticize the obviously glaring flaws in the organization. While it’s obvious that the group’s “all sides must be heard” philosophy allows a loophole for actual hate groups, Hail Satan? is more interested with logistical problems than First Amendment stumbling points. One female leader finds herself excommunicated for wishing death upon a notorious politician, which is well within her constitutional rights, but a bridge too far for her bosses. Whenever they appear in a town or community and something terrible happens at the same time, they’re naturally scapegoats, but they struggle to figure out why that might be, holding just as big of a persecution complex as the entities they’re rallying against. One interview subject – one of the leaders who appears only in the shadows – expresses initial regret for their Boston demonstration, but it’s only after everything is said and done that he even realized how evil the Catholic Church sex abuse scandal was, suggesting a leadership that does something primarily for shock value, only looking for deeper meaning on the fly.

It’s hard for Lane to wrap Hail Satan? up with any sort of definity. The story of The Satanic Temple and its evolution and shifting motivations is still unfolding, but as a portrait of a social movement that’s still in its awkward infancy, Hail Satan? is thoroughly fascinating, and a studious look at grassroots advocacy and provocation in the digital, media savvy age.

Hail Satan? opens at TIFF Bell Lightbox in Toronto and Cineplex International Village in Vancouver on Friday, May 3, 2019. It expands to Montreal on May 10 and to additional Canadian cities throughout the summer.

Check out the trailer for Hail Satan?:

The member who was excommunicated called for the assassination of the president, which absolutely is NOT within anybody’s constitutional rights, and it could have easily earned The Satanic Temple a designation of a terrorist group.