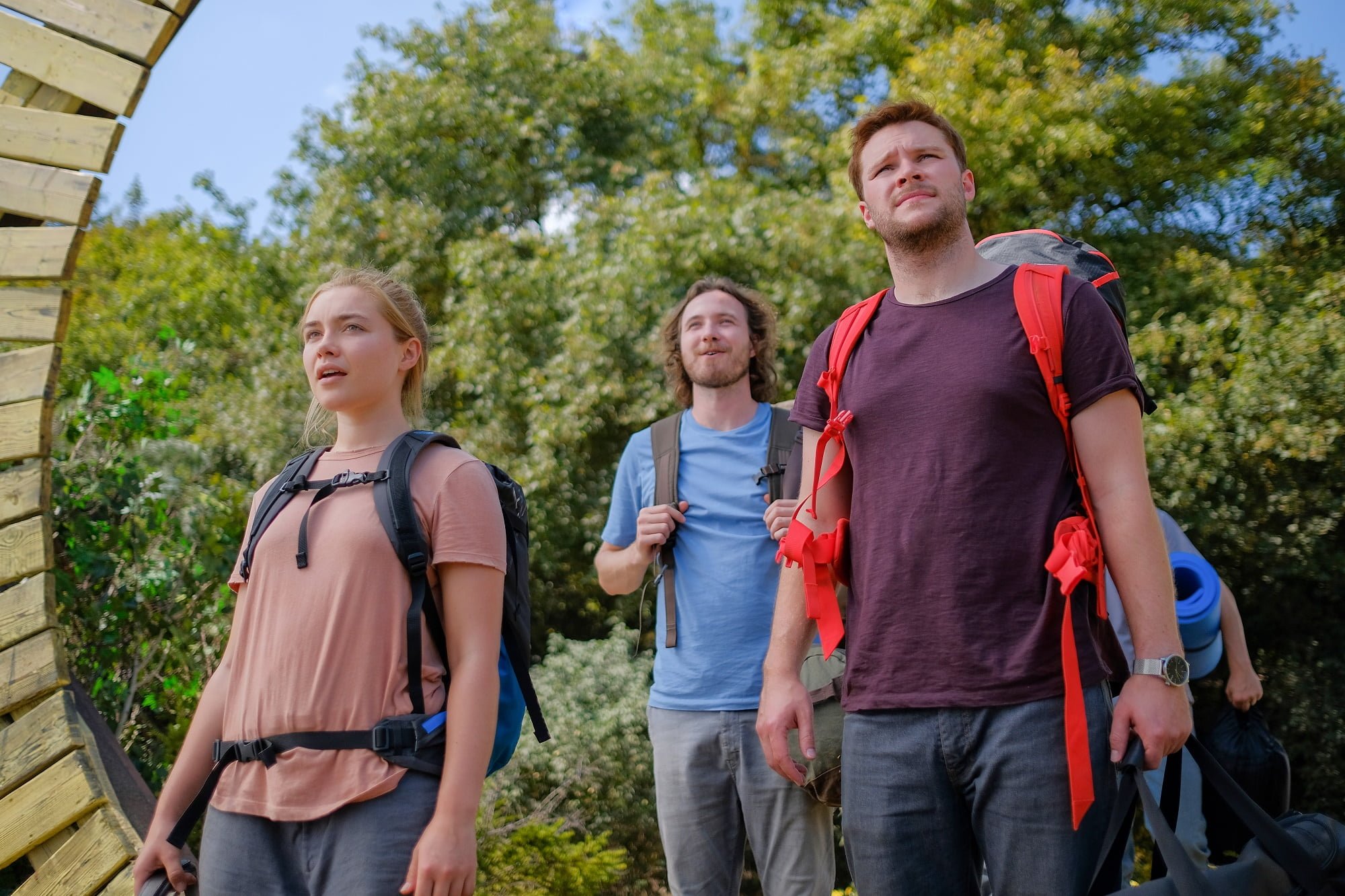 A sprawling, ambitious, indulgent, and assuredly unnerving follow-up to his terrifying critical and commercial success Hereditary, Ari Aster’s sun and blood drenched Midsommar is yet another example of a filmmaker throwing everything they can into their second feature because their first major success has allowed them a lot of leeway to go a bit crazy and over-the-top. Midsommar is far from a bad film or an unentertaining one, but it’s a whole lotta movie that demands a lot from its audience. It’s a gleefully uncompromised mindfuck of an experience that’s far from perfect, but one that will borrow its way into a viewer’s skull and imprint itself on their brain. Midsommar is a lot of things worth talking about, but forgettable certainly isn’t one of them.

Romantic partners and grad students Dani (Florence Pugh) and Christian (Jack Reynor) are on the verge of a break-up. Dani suspects that Christian wants out of their relationship, and she’s absolutely right. Christian is constantly being told by his best mates (William Jackson Harper and Will Poulter) that Dani is making him thoroughly unhappy, but the young man delays the inevitable after his girlfriend suffers an unspeakable, shocking loss. Feeling a tinge of sympathy for Dani, Christian invites her to tag along with him and his buddies to an unusual getaway in Sweden, one that’s part vacation and part research assignment for school. The four friends are invited to witness and partake in a traditional midsommar solstice ceremony by a classmate (Vilhelm Blomgren) in a secluded, rural community. The event – which only happens for nine days every ninety years during long days of near round-the-clock daylight – seems innocuous enough at first glance, with townsfolk dressing up in period garb and carrying out a bunch of formal pomp and circumstance while everyone takes a lot of psychoactive drugs, but it’s not long into the “great feast” when the friends start to realize that the ceremonies and their invitations have darker intentions.

Midsommar, like Hereditary before it, finds Aster pulling from a wide array of visual or storytelling influences at the same time. It’s simultaneously a film about pagan cults, a break-up flick, a disreputable slasher where a bunch of unsuspecting young people are picked off one by one, a medieval parable, a visual poem, a religious allegory, a revenge fantasy, a teen movie, a mystery, and a story where the main protagonist might be slowly giving in to the madness that seems to run in their family. What sets Midsommar apart from most pastiches, however, is the way that Aster is able to contain all of his story’s different, sometimes competing settings within the same assured and confident framework. No matter the story he’s trying to tell at any given moment, Aster is able to find a consistent sense of style to unite his picture’s threads upon a common thematic ground. While Midsommar boasts more impressive production design and the unique gambit to set the majority of the action in blinding daylight, Aster’s latest shares Hereditary’s ability to turn the most seemingly mundane activities into bloodcurdling terror at a moment’s notice, simply through the art of casual observation and making sure every frame has as much depth as possible.

Midsommar has been meticulously designed by Aster and is chock full of “blink and you’ll miss something” moments. It’s a film so visual in its approach that it begs for its images to be analyzed more than the story, from intricate and elaborate communal dinners chock full of clever details to the lengthy tracking shot that introduces the viewers and the outsider guests to the place they’ll call home for the next little while. Aster describes his own approach best during some of the film’s more psychedelic sequences, most notably when Dani looks up at a tree and finds it all pulsating with life like a human nervous system. Unless one is told otherwise, viewers can safely assume that every object, prop, and setting in Midsommar has its own life force, story, and purpose. It’s a purposefully overwhelming experience meant to mimic the feeling of the film’s inexperienced and perpetually confused travellers. 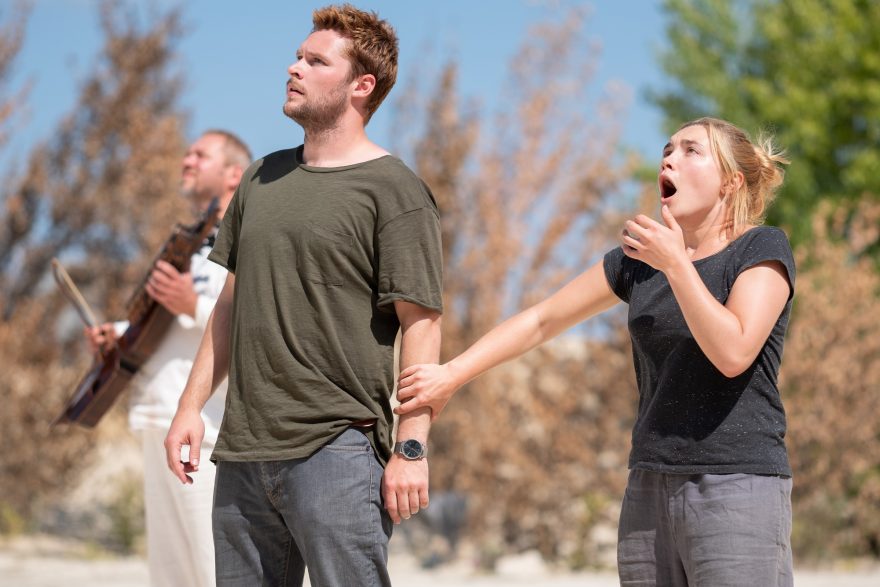 It’s also a slow burn, but given the film’s nearly two and a half hour running time, viewers might be prepared to wait a little bit for the truly shocking horror elements to fully take over Aster’s narrative. The incident that kicks Dani’s depression into high gear is certainly shocking (if a bit illogical, and even kind of crass, if I’m being honest), but it’s a long time before anything that’s blatantly designed to goose the audience happens again. In a welcome twist from his staunchly serious predecessor, Aster packs Midsommar with an unexpectedly wicked sense of humour. A great deal of Midsommar is genuinely funny, and thankfully, it’s supposed to be. There’s a deadpan, heightened wickedness to the townsfolk, and Poulter has a nifty role playing the most openly loutish of the tourists, offering some much needed comedic relief. There’s even a moment where Christian remarks about a random animal sitting in a cage that seems to suggest Aster knows just how overstuffed his own film has become, and he’s willing to take the piss out of his own material every now and again.

The problem with creating such a self-reflexive, elaborate, yet relatively obvious long term shell game with audiences is that it’s sometimes hard to take everything as seriously as Aster probably wants us to. I can see people with strong feelings about on screen depictions of mental illness, suicide, PTSD, and physical disabilities having a lot negative things to say about how these things are depicted and used as plot points in Midsommar, and they wouldn’t be wrong. For a film where one of the main characters (Christian) is being taken to task for their complete lack of empathy, the film Aster has created is a rather basic tale of empowerment (or at least that’s how I think the filmmaker sees it) that’s curiously lacking in those same social graces. There are elements of Midsommar that will flat out offend a large number of people who will see the film, but they’re also so awkwardly handled and integrated into the story that these slights will likely register as being too strange or too silly to be taken seriously or be seen as exploitative. That’s a pretty big problem when the majority of Midsommar is built around a character that’s nursing a slowly breaking heart. It’s a film so focused on its goals that there’s no heart to really break, and that becomes a problem during the unnecessarily lengthy climax where Aster drops all of his threads except for the one regarding Christian and Dani’s relationship.

What heart the film does have comes primarily from Pugh, who continues to impress as a versatile lead performer. She’s given a complex, sometimes purposefully contradictory character to work with, and there isn’t a single scene of Midsommar where Pugh seems like she’s struggling to maintain the film’s centre. She’s the grounding force that Aster needs for Midsommar to succeed, and she’s matched perfectly by Reynor, an actor who also continues to make a big impression in each of his projects. While Pugh’s Dani starts off sympathetic and only grows more so as Aster’s narrative unfolds, Reynor sinks his teeth into the role of the film’s most obvious antagonist, growing into more of a cad as things progress. Dani’s heroism is eventually tinged with a slight bit of malevolence, while Christian’s unconscious ability to undermine the feelings of his buddies and his girlfriend grows more pronounced as their situation grows more desperate. His evil isn’t one of obvious malice, but rather that of a selfish young man without a shred of self-awareness. They make for a great pair and emerge as Aster’s biggest assets outside of the talented craftspeople who put Midsommar together on a technical level.

The experience of Midsommar is gruelling and sometimes questionable, but overall it’s worthwhile; the kind of film that succeeds slightly more than it stumbles. There’s too much to take in here on a single viewing, but it’s also so heavily detailed that it’s almost impossible to dive into it too soon after that initial watch. I have thought about Midsommar a lot since I watched it last week, but one of the things I haven’t thought much about is sitting through it again anytime soon, which given the ethereal, uneven nature of the film, sounds like both a compliment and a detraction at the same time. It’s certainly adventurous, ambitious, and an original way of taking traditional tropes and cliches and breathing new life into them, and it’s easy to admire Aster’s method of filmmaking. It’s just hard to tell if I like it more than I admire it. It won’t be ninety years before I revisit Midsommar, but we’ll see what my opinion will be on this one is when I finally feel up to rewatching it.

Check out the trailer for Midsommar: