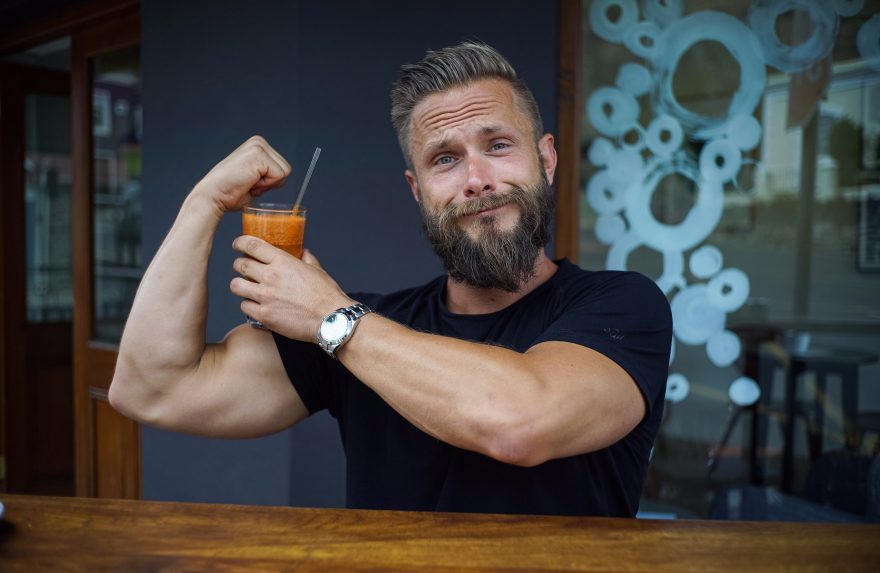 Actor and celebrity health and wellness trainer Magnus Lygdback has some great advice. Whether you’re star Mackenzie Davis training to take on killer robots in Terminator: Dark Fate, or just someone who wants to start working out, his advice is quite simply finding balance in your life.

The same thing goes for nutrition he says. You can have a cheeseburger, at least now and then.

“Try to eat every three hours–that’s five meals a day,” he said. “Make sure that 17 out of 20 meals are on points, and three out of twenty meals–enjoy life.”

Lygdback has been working over 18 years with actors, musicians, and athletes to help them get fit or prepare for a role.

With Mackenzie Davis and Terminator: Dark Fate, he started working with her four months before filming to prep her for the role of Grace.

“We actually started with me Skyping her and getting her a training program and a private chef,” he said.

And from there, they developed a plan for what she needed to do to look right for the part.

“I always say, it’s all about building a character,” Lygdback said. “You need to break down who the character is and what they need. We’re going to build you differently whether you’re a boxer or if you need to climb, or move in a certain way. And then you have the aesthetics; how you want to look, and who you’re working with–genetics and what they’ve done in the past. I would say it’s a combination of all of those things.”

They also had to plan to make sure Davis could stand her own opposite her imposing co-stars.

“We knew that this was a huge deal because you’re stepping into the Terminator world alongside Arnold [Schwarzenegger] and Linda Hamilton, who are both icons physically. We knew we had to bring something to the franchise so the pressure was on, but we wanted to build a strong fighting female character who kept her femininity but still looked bad-ass.”

Working with Davis, Lygdback was impressed from the start. “She was so determined and she understood what it would take and she brought it every single day, so she didn’t disappoint,” he said.

“Her determination and just her showing up every day was one of those things that, you can never ask for that, but you know it’s going to be special.”

Given the chance, Lygdback would have loved to work with Schwarzenegger himself too, but he admitted, “it’s not like he needs me. He’s a smart and inspiring guy who paved the way for people like me, so he’s always been one of my favourites.”

Starting out, Lygdback originally played ice hockey, and that got him working with athletes training in Sweden, where he grew up, “and then I eventually moved on and developed a method for artists.”

“To this day,” he said, “I work mostly with artists, and with a different approach than has been done in the past. I break down what you need as an artist and that’s what took me to the U.S. and that’s how I got into the film world as well.”

“My first film job was with Alexander Skarsgård in The Legend of Tarzan. After that, it just kind of took off, and I’ve been doing a couple of projects every year ever since.”

Those projects have included Glass, with James McAvoy; Tomb Raider, with Alicia Vikander; and the upcoming Wonder Woman 1984 with star Gal Gadot.

“It’s such a huge role, and having a daughter myself, it’s such an important role as well,” he said of working with Gadot. “It feels really special to be part of that franchise and a female super hero for the world.”

“I can’t wait for that movie to come out, it’s going to be really special for sure.”

Terminator: Dark Fate is out on Blu-ray and digital download now, and you can find out more about Magnus Lygdback at magnusmethod.com.