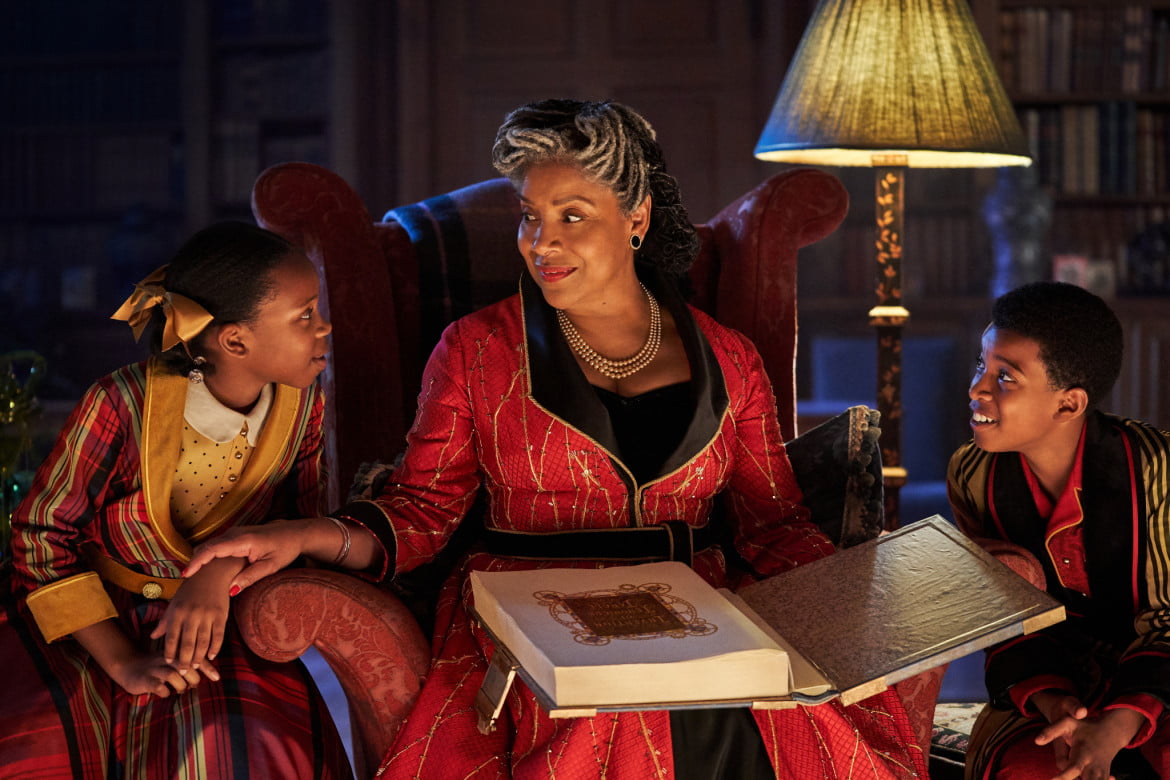 An unabashed and infectious slice of seasonal song and dance cheese, Jingle Jangle: A Christmas Journey – a title that makes me giggle a little every time I have to say it out loud – is on the high side of family friendly holiday movie expectations. Packed beyond the bursting point with wonder, whimsy, spectacle, good cheer, and anthemic songs, Jingle Jangle: A Christmas Journey is a raucous good time for anyone keen to get into the holiday spirit a bit earlier than usual this year. And let’s face it. 2020 has been awful. You’ve more than earned the right to lose yourself in something as ridiculous and kind natured as this. The holidays are a time to overindulge, and few movies in the genre are as indulgent as this.

Forest Whitaker stars as Jeronicus Jingle – a name that’s somehow even better than the title of the film – one of the world’s greatest inventors and toymakers. Or at least he was thirty or so years ago. One fateful Christmas, Jeronicus had his book of toy ideas and schematics stolen by his young apprentice, Gustafson (played by Keegan-Michael Key as an adult), who was feeling undervalued by his otherwise beloved boss. What drove Gustafson to cheat his way into becoming the most famous toymaker in all the land? A deranged, self-aware tin-toy matador (voiced by Ricky Martin) told Gustafson to do it. Now on the wrong side of middle aged, virtually broke, and running a pawn shop out of his once thriving factory, Jeronicus (don’t call him Jerry) has become a depressed, disheveled shell of his former self. But in the midst of his darkest holiday yet, Jeronicus is paid a visit by his granddaughter, Journey (Madalen Mills), a precocious child with boundless enthusiasm and just as creative of a mind. Will Journey be able to save her grandfather’s shop with an invention of her own after filming the film’s sought after MacGuffin? Will Jeronicus start warming up to the world around him, including the mail lady (Lisa Davina Phillip) who keeps unsubtly flirting with him? Will Gustafson’s nefarious plan to stay on top be thwarted? Will the villain see the error of their ways? WOULD. IT. BE. A. CHRISTMAS. MOVIE. IF. THEY. DIDN’T?

That last bit might sound like I’m being overly sarcastic or harsh towards Jingle Jangle: A Christmas Journey, but I meant it with sincerity and all the joyous enthusiasm implied. Jingle Jangle: A Christmas Journey is a ridiculously over-the-top spectacular that seeks only to entertain. It’s a ludicrous blend of steampunk tropes, old school BBC-produced single stage holiday specials, and The Greatest Showman style bombast. Written and directed by David E. Talbert (Almost Christmas, Baggage Claim) – a filmmaker working on his biggest project yet – Jingle Jangle: A Christmas Journey is made with love and more sweetness than any mortal human being could handle. It’s a sugar rush of a musical, and while the comparisons to The Greatest Showman are certainly appropriate in terms of scope, scale, and fence swinging set-pieces, Talbert’s film is vastly preferable. Whereas The Greatest Showman made a dubious, choppy mockery out of a true story, Jingle Jangle: A Christmas Journey corrects all of that mysteriously beloved musical’s problems by never tethering itself to reality for a single second. The second the viewer sees narrator Phylicia Rashad (who’s having one heck of a fall between this and Black Box) reading to her grandchildren a pop-up storybook with moving gears and parts, they’ll know everything to follow is pure, uncut fantasy.

This is a film where one can immediately tell that it was made by people who adore the holiday season, so Scrooges best beware. Although there’s never any talk of Santa or “the reason for the season,” Jingle Jangle: A Christmas Journey is built on a foundation of peace on earth and goodwill toward man. It’s about doing the right thing, helping others in their time of need, opening one’s heart to the possibilities of the season, and spending time with loved ones. It’s a completely secular holiday fantasy, which also sets Talbert’s work apart from the pack when one considers how closely Christmas is tied to iconography. In another break from genre norms, Jingle Jangle: A Christmas Journey shows a genuine love for science, mathematics, and ingenuity amid its high fantasy, which is a nice change of pace that makes the film seem somewhat smart in parts. The approach here is “everything including the kitchen sink and then please run back to the hardware store to get more sinks,” but Talbert’s film carves out a place of its own, while subtly riffing on the likes of Dickens and O. Henry. It’s a special effects driven blockbuster that wears its influences proudly on its bedazzled, ruffled, velveteen sleeves (including some nifty nods to Black Panther and James Brown), but at least it’s honest, which is precisely the tone something this knowingly corny needs to be if it wants to succeed. 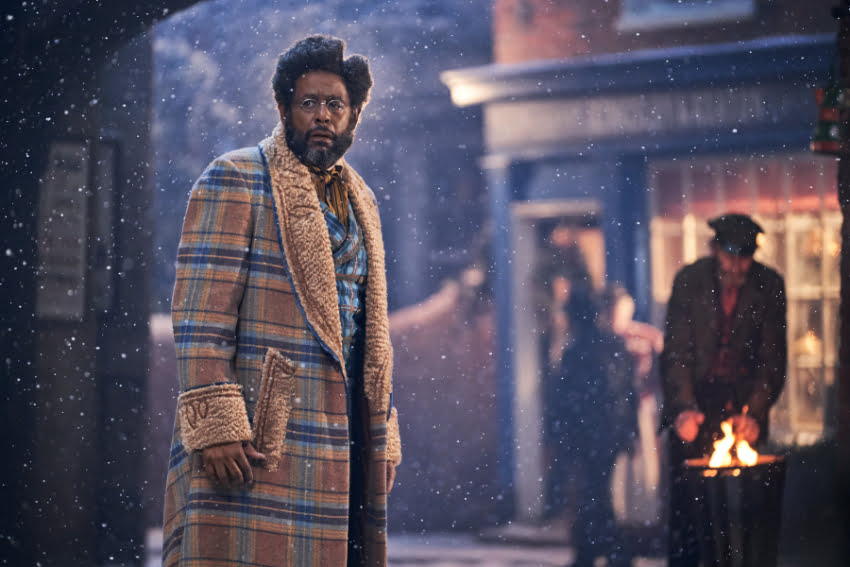 With the exception of Hugh Bonneville, who pops up for a couple of scenes as a banker sympathetic to Jeronicus’ plight, Talbert’s film also boasts an atypical, predominantly BIPOC cast that makes for a more inclusive and welcoming viewing experience. But more groundbreaking than overall casting of the film is netting an esteemed actor like Forest Whitaker to play the lead role. The Oscar winner turns out to be the best of sports, grounding the film with a perfect balance of cynicism and warmth. Whitaker’s ability to act serious amid all this silliness – even when working out mathematical equations in thin air like he’s Tom Cruise in Minority Report – grounds the film in some degree of respectability, which exists because the performer has accepted this material for what it’s trying to accomplish and embracing it wholeheartedly. And he sings, too. And it’s pretty good!

For their parts, Mills makes for a compelling young heroine worth rooting for, and Key is good at playing a blowhard that isn’t so much a villain as he is a misguided soul. Mills gives the film a good deal of heart and soul, and Key – in what might be his best performance to date – provides a fair bit of villainous slapstick and swagger. Jingle Jangle: A Christmas Journey also gives its supporting cast plenty to do besides singing and dancing, making it a film with a lot of out there character turns, but no actual bad parts.

Talbert and his design team – especially in terms of costumes and sets – work overtime to make their fantastical world both immersive and familiar. The town is laid out much like one would remember from any number of adaptations of A Christmas Carol. The buildings are basically assembled as if they were a theatre in the round, and everyone moves between the different buildings. Within those structures and sets are loads of fine detail, like scratches on floors on worn out carpeting from chairs being pushed in and pulled out. Every stitch of clothing, prop, and hairstyle informs the characters wonderfully. Talbert and his team know that for silliness to be taken somewhat seriously, the choices made along the way have to be impeccable. It can’t feel like a world no one would ever live in. It has to a world that these specific characters would live in.

The least impressionable thing about Jingle Jangle: A Christmas Journey is the soundtrack, and even that’s pretty good. The songs, produced in part by John Legend and Philip Lawrence, are somewhat hit or miss, but the ones that work – the absolute banger “Make It Work” and Key’s villainous “Magic Man G” – are highly memorable. Talbert’s acclimatization to musical trappings get off to rocky start in the opening number, which has some dodgy lip synching, but once Jingle Jangle finds its groove, things only go up from there with choreography that remains on point and expertly performed throughout by the dozens of dancers on hand.

Jingle Jangle: A Christmas Journey is a fun time, even if one runs the risk of tooth decay watching it. Am I being a little easier on this one because 2020 has felt like a neverending nightmare of bad news? Perhaps. But even with the bar lowered, there’s still lots worth admiring and enjoying. Besides, any holiday celebration that one can watch from the comfort of their home this year is a good one. 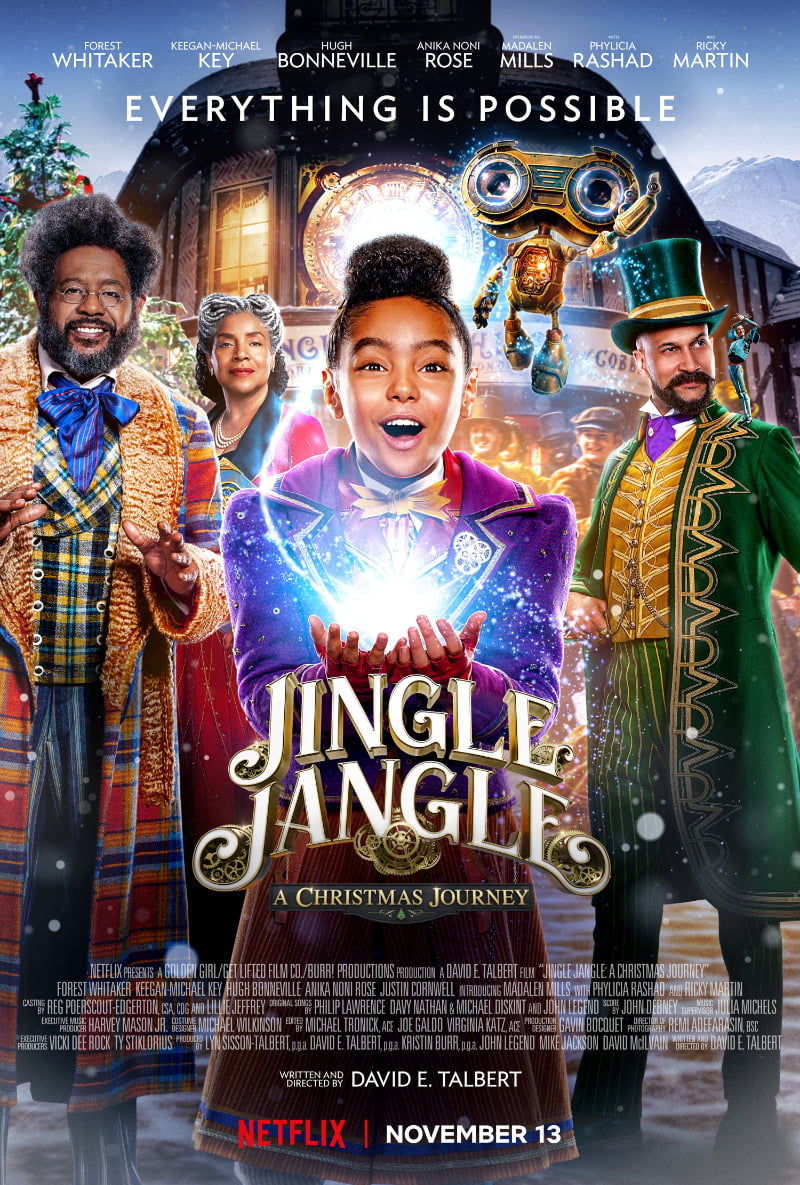 […] thanks in no small part to the contributions of cinematographer Remi Adefarasin (Elizabeth, Jingle Jangle: A Christmas Journey). Outside of the courtroom, The Last Vermeer feels like a standard tale of art, loves lost, […]