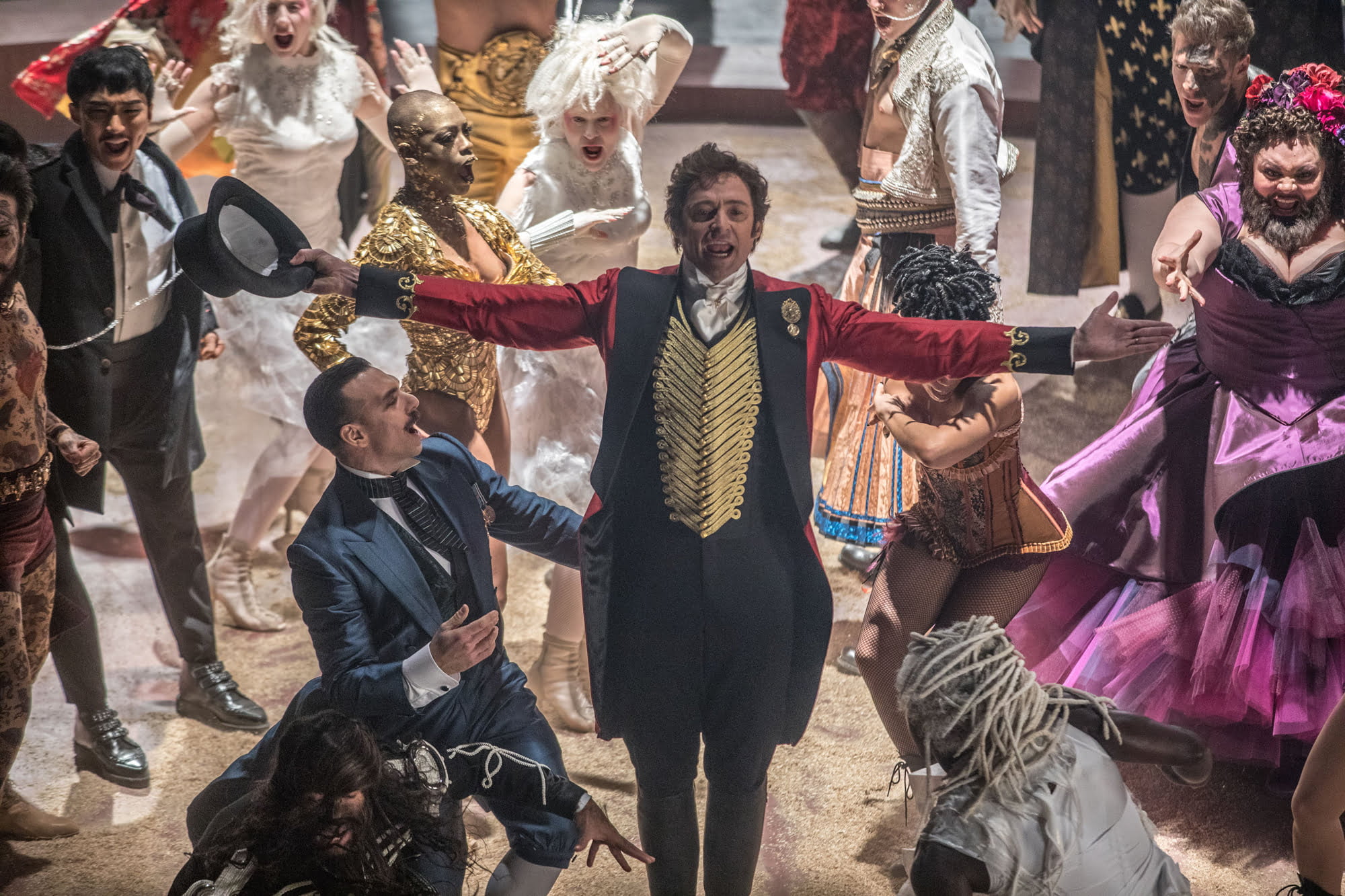 The Greatest Showman, this holiday season’s token blockbuster musical, is a top to bottom mess of a film that can’t decide if it wants to be a biopic, a romance, completely made up hooey, or a bunch of music videos for modern styled pop songs that all sound exactly the same strung end to end. In most every respect, the debut directorial feature from visual effects artist Michael Gracey is a catastrophe in every sense of the word. But in this case, the baffling overall nature of the project results in a rather fun, enjoyable popcorn flick. I don’t think I’ve seen a bit of mainstream populist entertainment this ungainly and defiant of categorization since Robert Altman made Popeye. It’s by no means a good film, and yet, I’m in complete awe of it. It doesn’t work at all as a piece of art or as a coherent film, but it’s undeniably genial and energetic.

The Greatest Showman is a very, very, very, very, very, picture every use of the word very in bold, italics, and underlined in 20 point font, very, very loose retelling of how scrappy entrepreneur and family man Phineas Taylor Barnum got into the circus business in the 1800s. Most of the films incalculable flaws could have been looked at through a different lens if the main character were named anyone other than P.T. Barnum and the screenwriters – Jenny Bicks and Bill Condon – admitted that they made the whole thing up, but they didn’t, and here we are.

Barnum is played by the always watchable and musically capable Hugh Jackman, and his loving, supportive wife is played by the equally charming and talented Michelle Williams. After losing his job at a shipping company, Barnum, a huckster at heart, concocts a scheme to get a fraudulent bank loan and open up a museum of curiosities, freaks, and assorted ephemera that polite society frown upon. Barnum’s whip-smart ability to spin negatives into positives allowed the museum to quickly turn into a circus that employed a variety of disabled and malformed people for the sake of shock value. The film tries mightily to portray Barnum as an equitable minded saint who simply wants to give the downtrodden a fair shake, but in reality I think the real life P.T. – who often said he would do anything to line his own coffers – had other motivations.

The circus brings in the ducats, but courts derision from snobby critics (OH THOSE DAMNED CRITICS!) and the bigoted community at large who saw the circus as an affront. Once this more upbeat depiction of Barnum starts setting his sights on mounting more highbrow shows outside of his circus, those close to him – including his wife and kids – begin to feel frozen out of the equation.

It’s not worth trying to keep track of all the historical inconsistencies, narrative plot holes, and go-nowhere subplots, including a then taboo interracial romance between Zac Efron’s burnt-out playwright-slash-ringmaster and Zendaya’s trapeze artist. Clocking in at a breathless, relentlessly paced 105 minutes (with a good quarter of the film obviously missing thanks to choppy editing either at a script level or during post-production), there’s no time during The Greatest Showman to dwell on anything that’s being seen or discussed. In what’s either a brilliantly calculated risk or a completely accidental surprise, the dogged nature of The Greatest Showman’s final form ends up feeling like a trip to the circus. Songs are busting out every several minutes. There’s a stinging dramatic high-spot every other scene. The production design and visual effects pop with colourful eye candy so dazzling that it distracts nicely from the film not making a lick of sense. 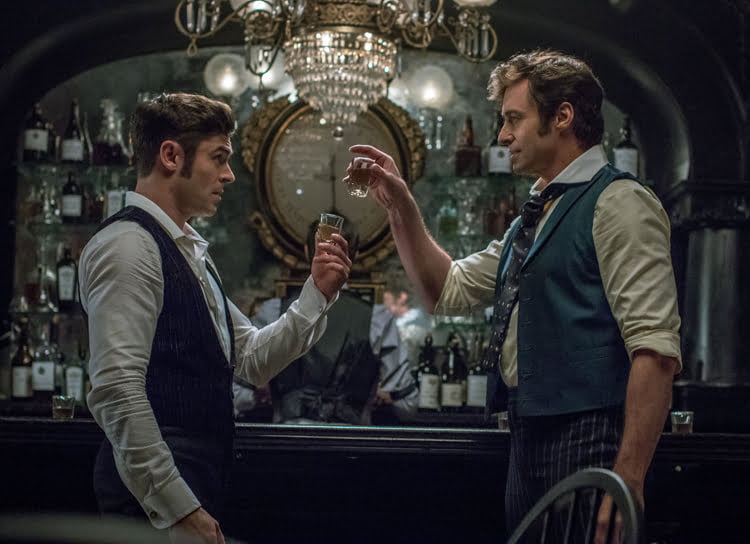 Much like today’s other new holiday wide release – Jumanji: Welcome to the Jungle – The Greatest Showman gets the most mileage possible out of well cast leads. Watching Jackman and Efron share a song and dance duet in a bar while negotiating a contract is easily the film’s strongest sequence, but just watching either of them charm their way through this wonky, paper thin narrative is like watching a bunch of cute bunny rabbits working together to drive a bulldozer down a steep hill. It’s adorable, but potentially disastrous, and ultimately you just hope things end up well for all parties involved. Even Williams, who has little to do and has the dubious honour of getting saddled with the worst musical number in the film, still comes out looking pretty great.

One of the weaker aspects of The Greatest Showman are those songs, composed by Benj Pasek and Justin Paul, who worked on last year’s hit holiday musical La La Land. Comparing The Greatest Showman to La La Land is already like comparing someone eating a candy apple while being shot out of a cannon to a four course meal at a five star resort, but the songs in their latest effort are nowhere close to the same degree of excellence. Yes, the songs in The Greatest Showman – particularly the opening number – are catchy, but they sound indistinguishable when placed against most of what passes for bubblegum pop these days. It’s intentionally anachronistic, and the choice of pop tracks certainly fits the film’s populist viewpoint, but they all end up sounding like the same song at a certain point. You can only have a film with so many songs about following your dreams, believing in yourself, and realizing your true potential before they start to get dull and repetitive. In the case of The Greatest Showman’s soundtrack, more doesn’t necessarily mean better.

But at least the arrangements of the songs keep the viewer’s feet tapping like some sort of Pavlovian response, and that’s ultimately the point. I don’t know what happened to The Greatest Showman during its lengthy and reportedly troubled road to the big screen, but the filmmakers accidentally lucked into something almost deviously brilliant. Gracey’s technically accomplished film seems to have been pared down in the editing room so that only the most impactful bits remain. Anything that could slow the film down or be seen as filler – even if it develops anything in a logical fashion – has been excised. Sure, that means the final product barely makes any sense, but I don’t think the makers of The Greatest Showman take their viewers for suckers. The powers that be behind The Greatest Showman didn’t set out to make a musical or a biopic in the strictest terms. Heck, they didn’t even set out to make a film, motion picture, movie, or whatever you prefer to call it in the strictest terms. What they have created is an experience. Like most “experiences,” your mileage may vary, but you’ll definitely know that you’ve seen a show.

The Greatest Showman opens in theatres everywhere on Wednesday, December 20, 2017.

Check out the trailer for The Greatest Showman: