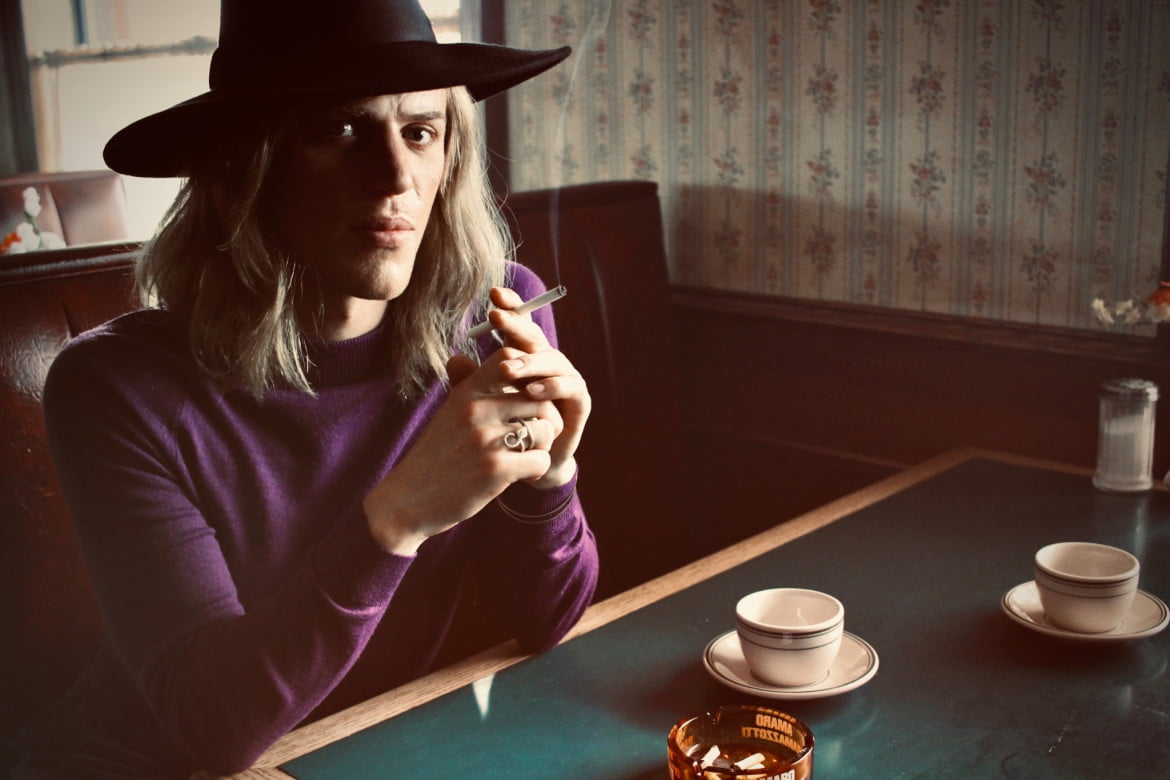 It’s often a dubious sign when a film about a real life icon starts with a title card saying “What follows is (mostly) fiction,” and that’s precisely the wrong foot that the cheaply produced musical “biopic” Stardust puts forward and never recovers from. Revolving around rock legend David Bowie taking his first trip to the United States in 1971, Stardust is the sort of film that will likely outrage superfans, invite head scratching from those with passing knowledge of Bowie’s life and/or critics, and probably bore all of them senseless. It’s so frustrating to watch Stardust that one wonders why anyone would bother making a film so obviously compromised in the first place.

Multi-talented British singer, songwriter, and musician David Bowie (Johnny Flynn), who’s still flying high on the success of Space Oddity in his home country, has been informed by his manager (Julian Richings) that his latest album, The Man Who Sold the World, has tanked in the United States, and label executives are getting restless and impatient. Bowie says that he needs to head across the pond because the Americans executives and publicists don’t know how to sell him as an artist. Bowie makes the trip, thinking he’s been set up with a tour by Mercury Records publicist Ron Oberman (Marc Maron), but due to visa issues, David is only allowed to give interviews and play low-level private functions. David hits the road with Ron, growing increasingly frustrated that no one understands his music or uniquely theatrical persona.

According to director and co-writer Gabriel Range’s take on events, this is the trip that would inspire Bowie’s seminal The Rise and Fall of Ziggy Stardust and the Spiders from Mars (even though there was still another instantly recognizable album that came out between the two discussed here), but don’t expect to hear a single track from any of the prolific and influential superstars many records here. Stardust, as one could probably guess from the opening seconds, is an unauthorized effort, and it might be the worst of its kind since the controversial and equally atrocious John Belushi biopic, Wired.

The Bowie estate didn’t clear the use of any of his songs for this production, and from the looks of things, Stardust couldn’t have afforded them anyway. When making a film about an artist, it’s an unforgivable sin to not showcase how their memorable art is created. The film is literally about the inspiration for an album that the audience doesn’t get to hear, outside of a cheeky musical score that tries to get as close to Bowie’s motifs as possible without risking a lawsuit. Every one of Stardust’s numerous problems snowball from this point, turning into an absolute avalanche of bad decisions.

Stardust deserves a minimal amount of credit for taking this cut-rate approach with a single fixed-period in Bowie’s life rather than applying it to his career as a whole. Normally, that approach is preferable to trying to boil an entire life down to two hours. At least Stardust is only botching one aspect of an icon’s life rather than setting the whole bloody thing on fire. But without any other external creative input, Stardust is nothing more than a mismatched buddy road picture, with Flynn and Maron’s oil and water chemistry the only thing on display. Bowie complains that no one understands him and is prone to bits of self-sabotage to stay amused, while Ron lashes out against his client’s antics because it feels like a final shot for the publicist to make a new star. 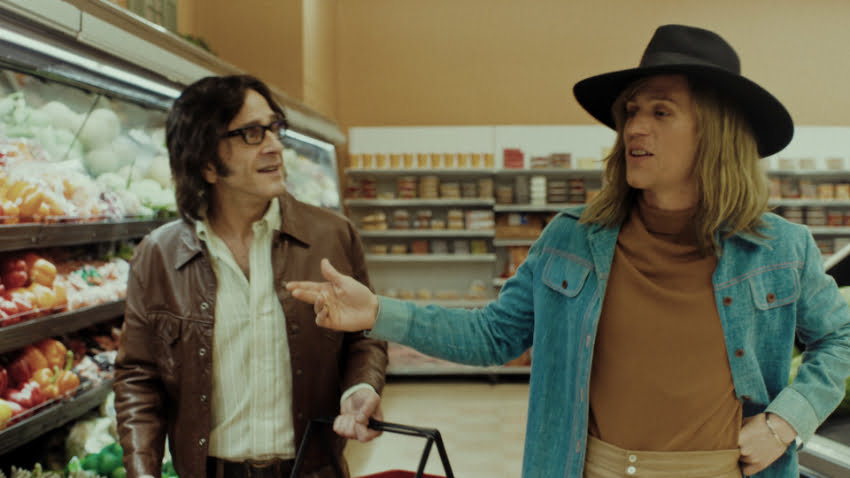 It’s a premise that could’ve worked if the film was about a fictional character that viewers know nothing about; someone struggling to make a name for themself without any clear direction and the person thanklessly tasked with trying to help them on that journey. Instead, Stardust plays (and I can’t believe I’m saying this) like an inferior version of Green Book with far less tension and stakes. It makes the viewer not care a lick about what happens to David Bowie. It could’ve been slightly amusing to watch someone like David Bowie playing open mics and vacuum cleaner salesperson conventions, but it doesn’t work when the artist isn’t remotely tethered to the art viewers know that he made. Stardust is so slack in its approach that it might as well be about anyone else.

There’s nothing miscast Flynn or Maron can offer to fix the numerous problems with Range and co-writer Christopher Bell’s material, and even less that Jena Malone can do with her wildly over-the-top and ill advised turn as Bowie’s wife, Angie, who’s pregnant back home in the U.K. (Although Malone deserves some perverse amount of recognition for looking more like Bowie than Flynn does.) Flynn, who impressively also plays acoustic guitar, harmonium, and violin on the film’s score, has trouble nailing down Bowie’s overall temperament, accent, and eccentricities, settling on a lacklustre, generic depiction of a rock star. Maron, who seems to have been given no direction whatsoever, just plays himself. Almost all of Maron’s dialogue starts with the kind of “[long sigh], Eh, [pause], you know what? [pause], ahhh, I dunno man” stammering that’s endearing under normal circumstances, but fails to create a character here. All of their interactions play like a moustache-free Marc Maron talking to a mediocre Bowie impersonator, not an everyman talking to a superstar in the making. Both Maron and Flynn are talented performers, but Stardust works under the misapprehension that merely hiring good actors will save awful material.

Range also has the audacity to pepper Stardust with performance numbers of songs Bowie had no part in creating. Flynn has the unenviable task of trying to sell these moments as David Bowie performances. Flynn’s approximations of Bowie are on shaky ground already, but without proper material for the actor to sink his teeth into, these moments are pointless. These aren’t Bowie performances. They’re Johnny Flynn performances, and while he’s a talented guy, he’s not Bowie. He’s just an imposter playing someone else’s songs, which is a perfectly fitting metaphor for everything else in Stardust.

Although Range tries to inject some humanity into Stardust by looking at David’s relationship with his depressed and mentally unstable older brother – Terry Burns (Derek Morgan, delivering the film’s best performance) – that’s a story that informs the creation of The Man Who Sold the World more than it does Ziggy Stardust. For a film that says it’s looking at a specific point in Bowie’s career, the actual creation of the Ziggy Stardust persona only accounts for the final ten minutes of the movie, long after anyone who was interested has stopped caring. The film revolving around Bowie’s fears that he will also suffer from his family’s history of mental illness would’ve been a better one than the story being told in Stardust.

I like to believe that even the worst films have something good in them, but it’s pretty hard to find that in Stardust. I’m sure that some people involved behind and in front of the camera had the best of intentions, even if those plans didn’t pan out. It’s the sort of absolute debacle where I genuinely feel sorry for the people involved. It’s not a malicious movie, just a terrible one. I doubt anyone involved with making even a theoretical and fictional biopic about David Bowie would’ve attempted such a feat without being a fan. But when someone has to start a movie with the disclaimer that opens Stardust, everyone involved should’ve stopped right there.

Stardust opens in select Canadian cinemas and on VOD on Friday, November 27, 2020. If seeing a film in theatres, please take all necessary precautions. Wear a mask, practice social distancing, and stay home if feeling ill. 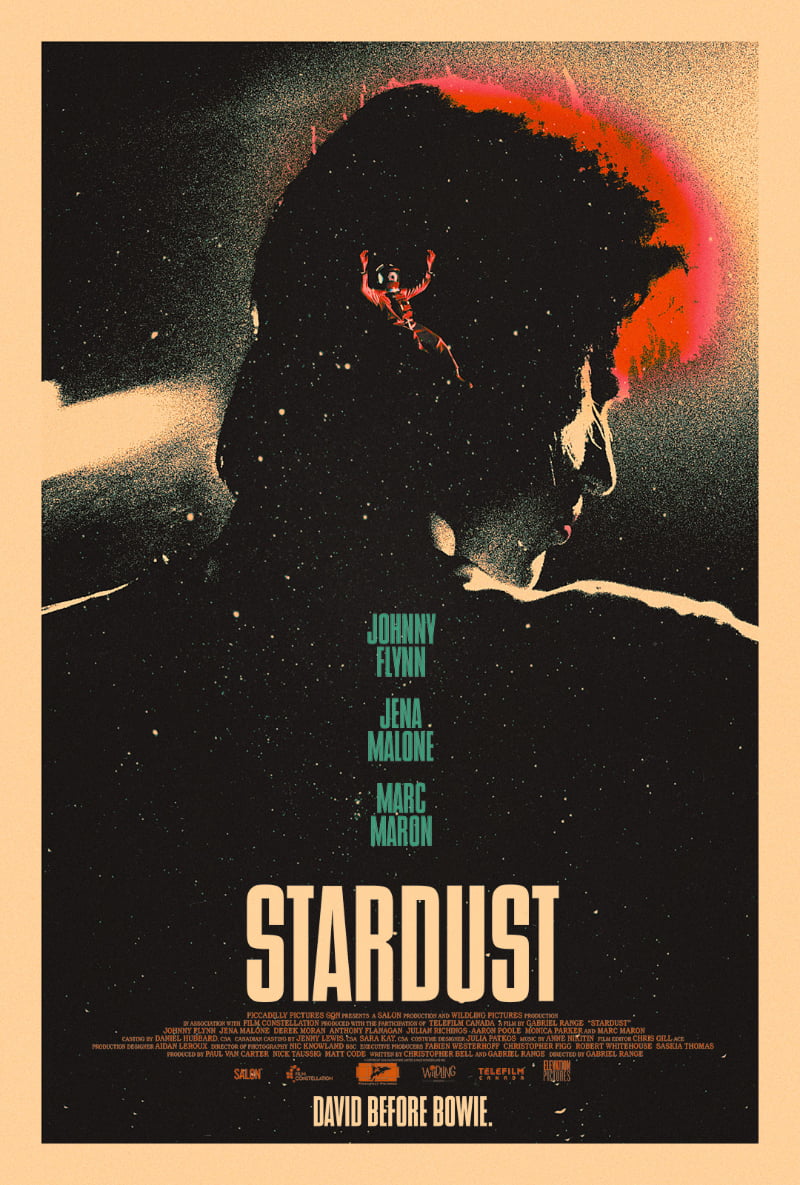