Triggered is the type of movie that’s so enamoured with its own concept that it ultimately ends up running things into the ground long before it starts wrapping up its unnecessarily convoluted plot. Part Saw rip-off (because we haven’t had enough of those in the past decade), Battle Royale rip-off (see note above), and mad bomber picture (which is nice to see revived after its brief mid-90s heyday), Triggered has an okay premise for a B-movie gore fest that’s crying out for a lot more ingenuity and a lot less story. It’s the sort of “race against the clock” story that’s begging to be told in real time, but strains credibility and patience as it wheezes towards and past the 90 minute mark. In genre circles, sometimes the “more is more” mentality can make for chaotic fun. With Triggered, it’s just too much.

Nine high school friends meet up for an impromptu reunion in the middle of the woods. Why in the middle of the woods? Apparently all hotels and better campsites were booked. A bunch of them are hooking up with each other. Some of them are caught cheating on their significant others. They tell stories that remind them of the good times. They tell stories that remind them of the bad times. They tell stories that remind them of the best times. They take a whiskey drink. They take a lager drink. They take a cider drink. Then, after a night of hard partying, they awaken (the same night) to find that they’ve been drugged with knock-out gas (which sounds dubious since some of them slept outside and drugging the booze seems far easier). When they come to, the group of friends finds bombs and timers strapped to their chests. The mastermind behind this makes himself known. It’s Mr. Peterson (Sean Cameron Michael), their former science teacher, who thinks the overdose death of his son years ago was actually a murder perpetrated by someone in the group. The timers of the bombs each have different lengths, and the only way for someone to buy themselves more time is to kill one of their friends in cold blood. The last person left standing is allowed to live.

So far, so good, I guess. Throughout the course of the night, each of the victims – who’ll realize that they aren’t such great friends after all – will reveal secrets about themselves that will somehow tie into Mr. Peterson’s revenge. Timers will run perilously close to expiring before someone will get the courage to kill one of their own. Others will adapt to the game with surprisingly gleeful malice. The resident smart girl, Rian (Reine Swart), will try to figure out ways to change the rules of the game. Tenuous alliances will be formed as if they’re all contestants on a reality television competition, and just as swiftly, they’ll be broken. The elements are there for something fun, but Triggered falls down before it can even start to run with its premise, quickly turning boring instead of riveting.

Triggered fails to give viewers what they want because nine virtually interchangeable and barely distinguishable characters are too much for South African director and co-writer Alastair Orr (The House on Willow Street) to handle. Outside of Swart, who has the unenviable task of delivering the most exposition in a film that tries too hard to explain its outlandish and already unbelievable premise, and Russell Crous, who’s having a blast as the cunning, pop culture loving psychopath of the bunch, none of the characters in Triggered make much of an impression. If Swart is the brains of the film and Crous is its dark, over-the-top wild card (who also gets to tell a pretty solid Jason Bateman joke), everyone else gets lost in the shuffle, including the ostensible heroine. That’s seven more characters who are on hand solely to add one more missing piece to a laboured, uninteresting core mystery. Sure, they have problems of their own that are compounded by these heightened circumstances, but Triggered stops dead in its tracks once the friends start bickering and throwing around accusations. The premise itself takes nearly thirty minutes to set up, and once the pace should be quickening, Triggered has to slowly grind to a halt so the mostly unlikable and threadbare characters can argue.

Not that the action and suspense in Triggered is that much better than the plot. A lot of Triggered is watching people running through the woods at night while shouting at each other and wailing in pain and despair. Unless there’s gore involved – and there’s some decently nasty stuff involving head trauma and exploding bodies – Triggered looks credibly like something that was shot in a single night with little consideration for how good it appears, a shortcoming that could’ve been papered over if the laborious tone matched the chaotic style. About the only thing that makes much sense in Triggered is that these characters would talk a lot before they do their dirty deeds, since none of them started off as killers and they need to work up the necessary courage and rage. It’s just a shame that none of their connections or interactions are novel or fun to watch. They’re just killing time before the next body drops, slowly eating away at viewer patience in the process.

With four or five fewer characters and a more condensed story, Triggered could’ve been an unpretentious bit of bloody fun. Instead, it’s a tedious exercise where it’s impossible to tell how much one should care about or loathe the characters involved, which becomes a major issue when Orr and co-writer David D. Jones arrive at their big reveal. I’m sure that reveal (which savvy viewers can spot an hour before it’s made clear) is meant to put all of the previous story threads into a new context, but the pivot doesn’t work. It just creates a vacuum that sucks the rest of the film down with it because nothing novel or interesting can be put in the place of what has been taken away. One should care about the ticking clocks on the chests of Peterson’s victims to some degree. The only thing many watching Triggered will care about is watching the clock in their room to see how much time is left on their end.

Triggered is now available on VOD in Canada. 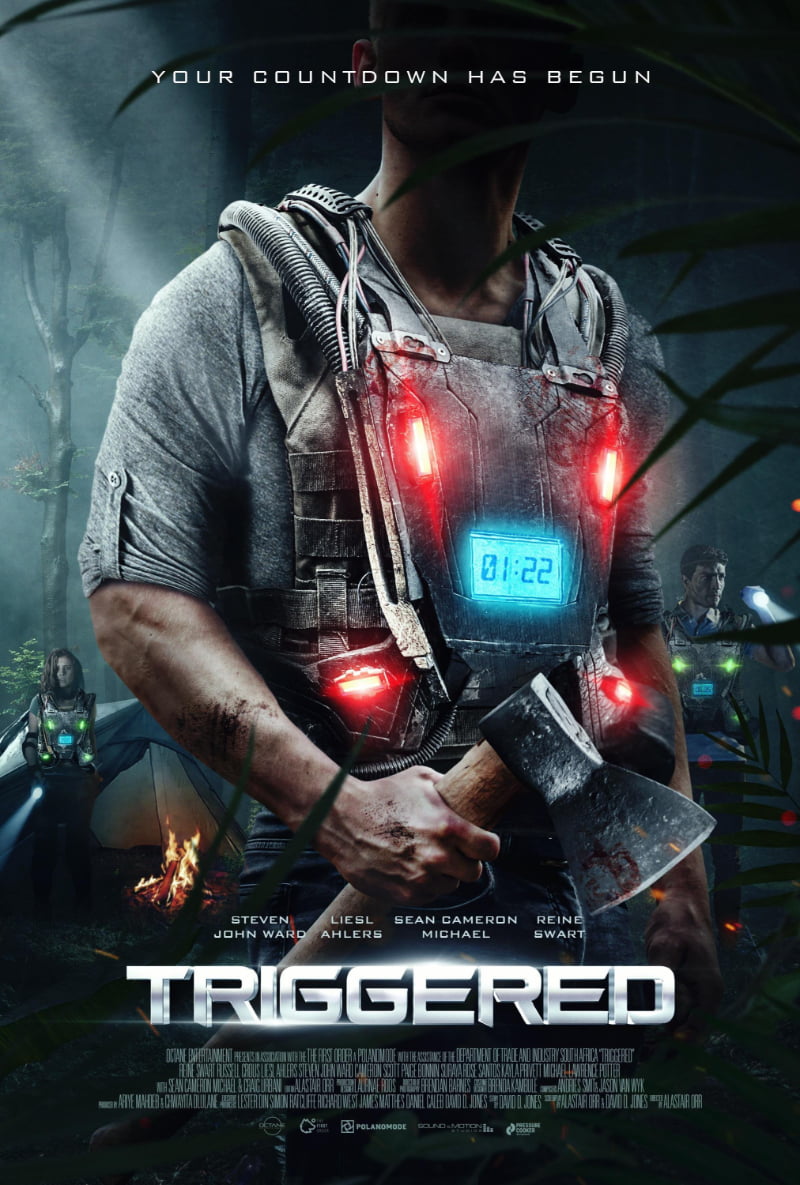