Lee Isaac Chung’s period drama Minari is one of the best films ever made about the Asian-American immigrant experience. It’s also one of the best films ever made about rural living and the seemingly never-ending chase for some to achieve “the American dream.” Packed to bursting with big dreams, nerve-wracking setbacks, homesickness, hope, and tragedy, Minari is as intimate and open-ended as filmmaking tends to get. Exceptionally focused and expertly performed, Chung’s work boasts documentary qualities and highly detailed, gorgeously cinematic drama. Although heavily autobiographical for the filmmaker, Minari is the sort of film one never wants to part with because they could easily claim many elements of the story as part of their own experiences. The family at its heart is one viewers will want to know for the rest of their lives.

After working at chick hatcheries in California and Seattle, Jacob Yi (Steven Yeun) has decided to bring his family to the Arkansas Ozarks. Jacob, a Korean-American immigrant, has dreams of farming fifty acres of his own and growing fruits and vegetables for the country’s increasing Korean market. Jacob, his wife Monica (Yeri Han), children David (Alan S. Kim) and Anne (Noel Kate Cho), and mother-in-law, Soon-ja (Yuh-jung Youn) move into a modest prefab home, with each adjusting to their new lives in different ways. The family struggles to get a leg up on their farming. Jacob and Monica have squabbles about how to achieve their goals and leave their old profession behind. Young David – who provides the audience with much of Chung’s perspective – views this new home with equal parts wonderment and apprehension, caught between Monica’s almost smothering protection and Jacob’s unfocused and distracted approach to family life.

Minari is simultaneously about cultural adjustment and a grander view of America. Although set in the 1980s, Chung’s depiction of a migrant family feels timeless. Not only does Minari intelligently, subtly, and empathetically capture what it’s like for a family to pack up and move between countries, but also what it means for families travelling within them. There’s a distinct sense that country-loving Jacob runs on instinct, dreams, and determination, while city-loving Monica is ruled by faith, cultural history, and anxiety. Jacob is drawn to Arkansas because it has “the best dirt in America,” while the increasingly frustrated Monica sees their modest fields only for the dirt within them.

Outside of a kindly, devout evangelical (Will Patton), who sells Jacob a tractor, and a few scattered Koreans who live in a nearby town, the Yis don’t have many friends outside of their core family unit. Jacob and Monica both want the best lives possible for their family in America, but they have frequently unspoken, deeply noticeable differences in terms of how they want to accomplish that. Neither wants to abandon their culture (with most of the movie’s dialogue remaining in Korean), but Jacob and Monica’s ideas of a “happy medium” couldn’t be further apart. As a depiction of how immigrants and migrants are often forced into picking and choosing how they assimilate into a new society, Minari is practically without parallel in American cinema. More often than not, Chung depicts the cultural divides inside and outside of the Yi family through observation and revealing dialogue rather than lugubrious, melodramatic, and leading explanations. 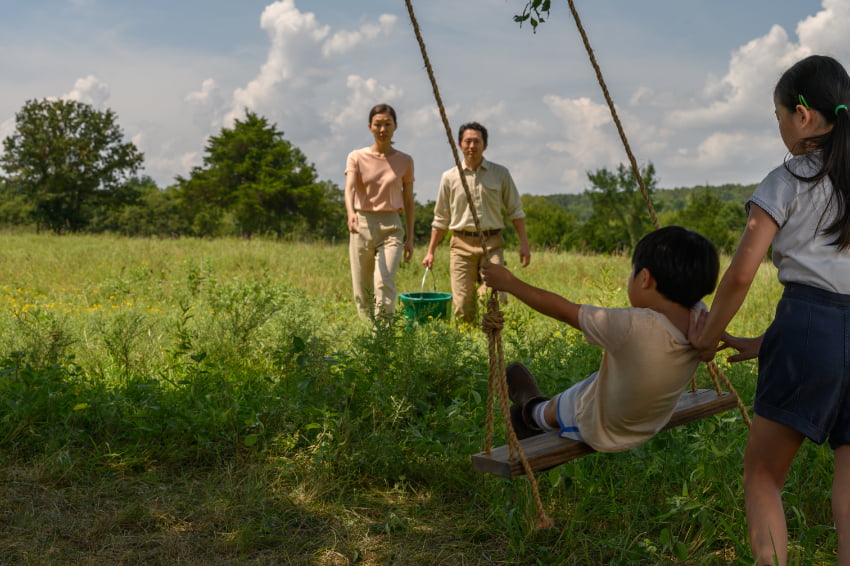 The rising tensions between Jacob and Monica provide most of the drama in Minari, but the heart and soul of Chung’s work can be found in the interactions between young David and elderly Soon-ja. Although clearly ailing and in her twilight years, recent arrival Soon-ja is a better ally to David than his own parents. Dad has tunnel vision, and mom treats David like a fragile plate of mica. Dad wants to create something to pass along to kids that are too young to understand, while mom wants to instill the fear of an Americanized God into her son. Jacob – a man who still thinks physically disciplining a child is acceptable – believes he can create an American identity, while Monica – whose punishments are more psychologically based – bluntly recognizes that David will always be seen as a Korean kid. While Soon-ja isn’t a perfect parental role model, and the two don’t hit things off immediately, she’s willing to forge a bond with David that his parents seem incapable of doing while under such stress. Whether Soon-ja is teaching the boy how to play cards, sowing seeds of the titular plant alongside a nearby riverbank, or sharing some Mountain Dew, she’s a good influence, not an antagonistic one.

Visually and narratively, Minari is an enveloping experience about self-doubt, perseverance, and the hard, fraught road to personal discovery. The settings look bucolic (thanks greatly to Lachlan Milne’s cinematography), and moments of warmth and human kindness abound throughout Minari, but the anxiety of being strangers in a new community pervades every frame. How does one plant roots when their own lives have been untethered for years by this point? What does it take to keep going, and how painful would it be to give up? Chung never provides answers. He merely observes and reports as if the film were made by a particularly poetic journalist. Chung offers a world that millions of people around the world can recognize on a visual and thematic level, and weaves into it a narrative that’s wholly specific and unique. The land unites everything, making the stresses of the Yi family feel like an intricate part of a more universal struggle for success and acceptance.

All four leads deserve special commendations for making Chung’s heartfelt story into a reality. Yeun continues to affirm his status as an exceptional character actor and leading man as the taciturn, intelligent, and possibly foolhardy patriarch. Yeun’s generous, restrained performance gives Han plenty to work with and draw from, while the actress also does a fantastic job of illustrating Monica’s loneliness and unwavering faith. Kim is a wonderful young actor, who portrays David as kind, inquisitive, and playful without ever coming across as precious or precocious. The biggest standout, however, is Youn, which is little surprise since her character seems to be the film’s most grounding influence. Youn provides Minari with much needed humour and emotional clarity. Together, the performers make viewers feel like they could be watching their own next door neighbours.

Minari builds to a shocking moment (one that’s spoiled to no small degree by one of the film’s trailers) that’s followed by something resounding and poignant for its proper conclusion. It’s a dramatically extreme, but thematically perfect note for Chung to end things on, and one that sums up the experiences of many immigrant and migrant families without seeming reductive or devolving into cliches. It makes one want to visit the family on screen and befriend them. Hopefully, Minari will serve as a much needed call for everyone to assist their neighbours in times of unprecedented material and emotional need. Their problems could be all of our problems at some point in life, and the insight provided by Chang and his cast is impossible to forget.

Minari is available across Canada on PVOD and via digital TIFF Bell Lightbox starting Friday, February 26, 2021. It is also in select theatres – where available – the same day. If seeing a film in cinemas, please take all necessary precautions. Wear a mask, practice social distancing, and stay home if feeling ill. 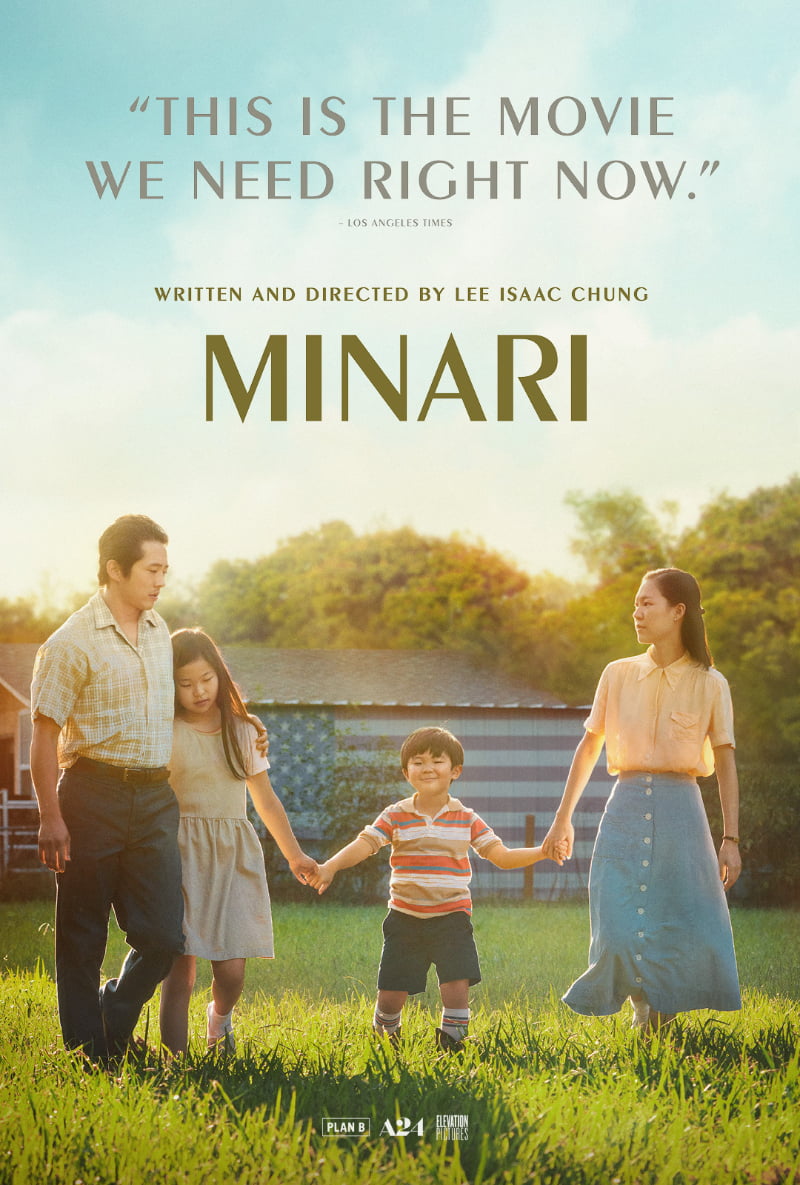