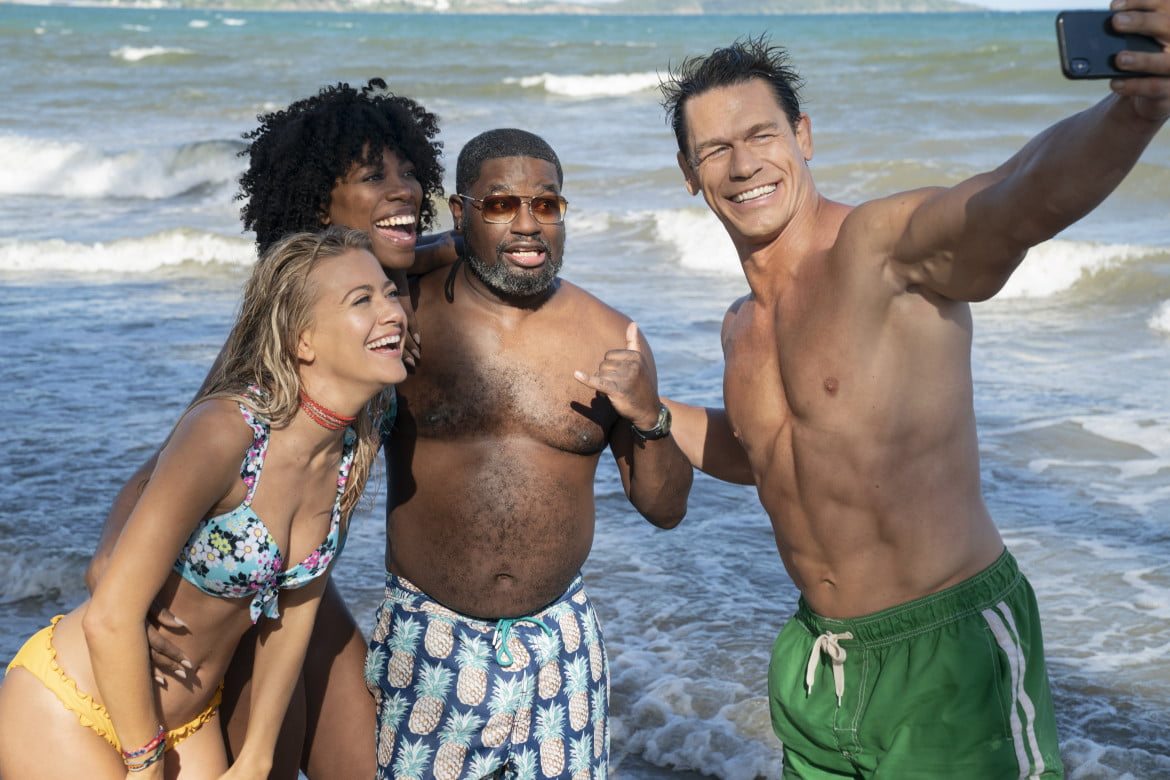 Making friends on vacation can be a funny experience, and that’s exactly what the new comedy Vacation Friends is all about.

When a nice but kind of dull couple make friends with two party animals, things get weird and wild, but not nearly as weird as when the party animals show up for the couple’s very exclusive wedding, even though they weren’t invited.

Lil Rel Howery and Yvonne Orji star as Marcus and Emily, a successful couple that don’t really know how to unwind. When they happen to meet the wild Ron and Kyla, played by John Cena and Meredith Hagner, their vacation gets a lot more interesting, and chaotic.

Bonding over their trip, Ron and Kyla feel like they’ve made a real connection with Marcus and Emily. Marcus is happy to forget their vacation friends though, so it’s a shock when Ron and Kyla manage to track them down for their wedding.

Vacation Friends is a hilarious comedy, with a surprising amount of heart, and the four stars are amazing together, with fantastic chemistry.

Talking about the film, writer and director Clay Tarver joined Howery, Cena, and Orji to open up about how they relate to their characters, hijinks during filming, and how they hope people will relate to the story.

Vacation Friends is available now in the U.S. on Hulu and Star on Disney+ in Canada.

Talking about his character, John Cena related to Ron in a few ways, even though he’s a very different kind of guy.

“I think as performers, we always try to take either extensions of ourselves or possibly the opposite of our personality,” Cena said. “Now if you see Ron and you see me, Ron’s probably not gonna wear a waist coat and a half Windsor.”

“I mean I’m cooler than Marcus, first of all,” Lil Rel Howery said. “What I do like about Marcus is… I like playing really irritated people…  And I love his facial reactions to what somebody’s saying, what’s happening.”

“What you’re gonna see throughout the movie is just him kinda loosen up. And that’s what made Marcus really dope. It’s just like because of what happens and everything.”

“I’m always terrible at just always trying not to tell too much of the movie, but he ends up letting his hair down a little bit.  But Marcus is just a very focused [guy] who’s in love with his fiance, and you know, he’s a stiff guy. And this vacation changes everything.”

“Emily is–she is fun,” Yvonne Orji said. “Not as reserved as Marcus, but she just wants things to go well.  She might be a little bit of a people pleaser, which I identify with.  I’m currently undoing a lot of that in therapy as we speak.”

“But, you know, she’s trying to please her father, her mom, and have everything go off without any problems.  And as we know in the movie, lots of problems ensue.”

Cena also thought that what he loved about the film was the contrast between the characters.

“On his resume, he’s such a bad ass, but in life he’s really such an emotional person,” Cena said about Ron. “And I love the contrast of that. And because Rel is so wound up, it really gave great balance. And then you see this wound up dude with all this energy trying to take it out on this large, hulky man who just really wants to give him a hug. And I think that’s a lot of hilarity between Rel and I.”

For the cast, and for writer and director Clay Tarver, they felt like the timing for the release is also perfect for where people are today.

“I think everyone’s ready for a good-vibe movie… you know?,” Traver said. “But we started this before all this stuff happened.”

“[W]hen we posted the trailer, most of the comments were like, ‘We can’t wait; we’re ready to just laugh,'” Orji said. “I mean obviously with the Delta strain and all the other variants coming up… some vacations have been cut short in real life, and I think people are looking for just any kind of escapism and people having fun as well.”

“I hope audiences are entertained and they laugh–that’s what I hope they take away,” Cena said. “I just think our subject matter is so relatable and so desperately needed right now, especially with people having to come up with plan B vacations and alter plans yet again. Here we are 18 months into the world changing [and] I think it’s gonna be good for people to just sit down and enjoy a film that might make them remember a moment of their life and-and smile a little bit and laugh a little bit.”

Howery also agreed with the suggestion that Vacation Friends breaks down a lot of stereotypes that we see in a lot of movies. “[S]ome of the events we do in the movie, for the wedding, things like that; it’s stuff you don’t normally see black people doing.”

Tarver also feels that the story is very relatable.

“Well, I think we all go on vacation. You meet somebody and you sort of get close with them for a week, maybe a little too close. And then, when you return to the sober light of day, you’re like, wait were we friends or were we not friends?”

“How close of friends were we?  And you sort of have this freedom to go a little bit out of your comfort zone because you think you’re never gonna see them again. And this is a movie where the premise is sort of what if you do see them again?”

Filming was also sometimes a bit wild, and made Orji think about what it takes to get the best performances.

“I think it was our last night filming in pseudo Mexico, but actual Puerto Rico.  When we did the bar hopping, and it was a large sequencing…. it was just mayhem, but in the best way possible.”

“And I think that was just, like, so much fun.  We also didn’t know that the world was shutting down on the other side of the ocean, so we were in our little bubble. So that was fun.”

“[The] best performances–I believe–come when you’re not in your head about performing, and you are just being and being present and enjoying the ride.  And, you know, Rel and myself were both comics and so it’s just like being able to be spontaneously on in the middle of moments and find the funny in whatever spontaneity comes out from that, we just go with it.”

There may also be a chance for a sequel. “I have a good feeling about it, so we’ll see,” Tarver said.