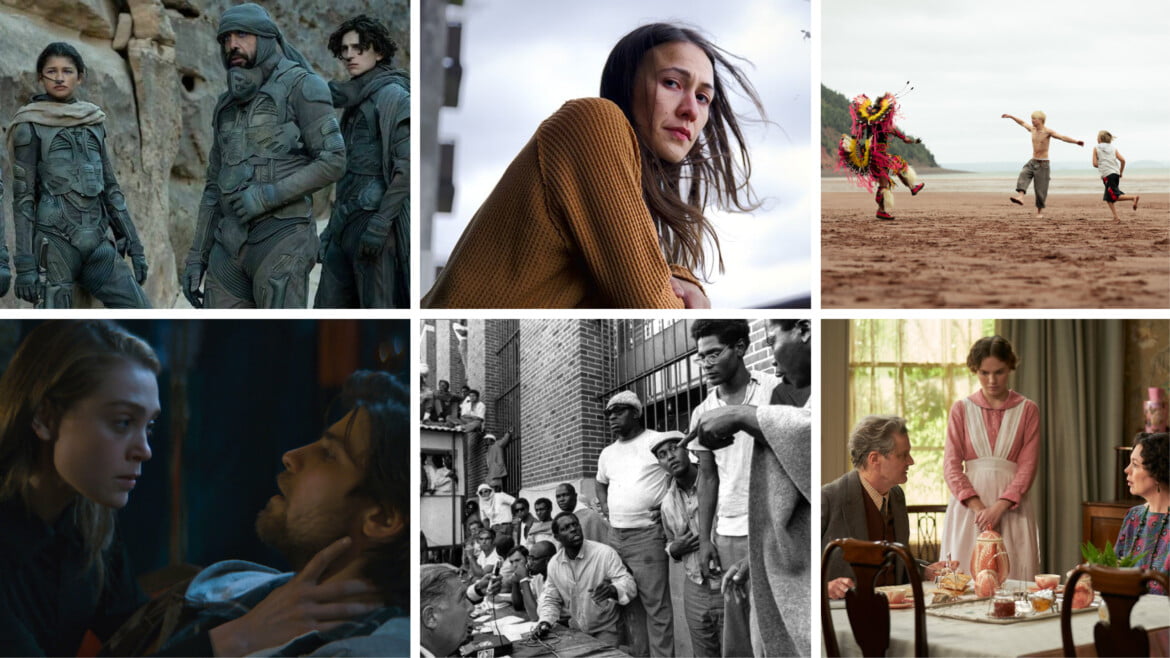 The 46th annual Toronto International Film Festival is in the books, and it was a great year to discover incredible new films from a wide range of filmmakers and talent. Here are a few of my favourites, with reviews for Dune, Night Raiders, Wildhood, Kicking Blood, Attica, Mothering Sunday, and Petite Maman.

Read more reviews from TIFF 2021: Julia, Scarborough, The Electrical Life of Louis Wain, The Rescue, Snakehead, and The Guilty.

Denis Villeneuve has crafted a masterwork of science fiction with his adaptation of author Frank Herbert’s landmark novel, Dune. The film feels epic–in scale, and storytelling–with a level of filmmaking that I haven’t seen in theatres for a long time. The script plumbs the depths of the novel for details, motivations, and meaning, while giving new life to some concepts through clever effects and storytelling.

The film also looks absolutely stunning on the IMAX screen, and the cast feel like they’ve lived in this universe forever. In particular though, Timothée Chalamet and Rebecca Ferguson are mesmerizing in these roles. Some of their best scenes are usually together.

For all its successes, Dune could be a bit stronger in the last scenes, as it mainly seems like a lot of setup for what we hope will come next in the eventual sequel, although that’s not confirmed yet. A lot happens in the film, however it’s missing at least a scene or two near the end to provide a clear arc for this part of the story.

Petite Maman is one of the most beautiful, sweet, and engaging films that I’ve seen at TIFF in all the years I’ve covered the festival. The film is delightful, and writer and director Céline Sciamma keeps the film light, quiet, and direct in a way that truly resonates.

Starring Joséphine Sanz and Gabrielle Sanz, the young stars deftly lead the audience through a story about a child connecting with her mother, played by Nina Meurisse. The film is masterfully well-timed, at just 70 minutes, and it’s moving, with cinematography that transports you to the French countryside.

Writer and director Danis Goulet’s Night Raiders is easily one of the best genre films that’s ever been made in Canada. The dystopian drama and thriller looks at the ways Colonialism has affected Indigenous people and communities for hundreds of years, with a focus on characters that are finding their way.

The great Elle-Máijá Tailfeathers stars with Brooklyn Letexier-Hart, as a mother and daughter trying to survive a dark future by living off the land and avoiding the destructive military that rules North America.

With moments that cross science fiction, post-apocalyptic action, and even a bit of horror, Night Raiders is compelling cinema and it’s meaningful, heartfelt, and smart.

Phillip Lewitski stars in writer and director Bretten Hannam’s Wildhood as Link, a two-spirit Indigenous teen on a journey of discovery, to not only find his mother, but to find his own Mi’kmaw roots. The film moves from scenes of urban decay back to nature, with Nova Scotia in a starring role, and Lewitski is totally captivating as Link. He perfectly captures the lost teen’s journey from a place of confusion, to finding himself with a sense of family and belonging.

Hannam’s moving story is a clever twist on the classic road movie, and from the cast to the dialogue, the film draws you in alongside Link, and the people who help him along the way.

The vampire genre finally gets new life in Blaine Thurier’s Kicking Blood, with vampires struggling with addiction, right next to their human prey. Alanna Bale leads the film as Anna, a centuries old blood sucker who seems to be getting by, moment to moment, and kill to kill. She’s practically dead inside, until she stumbles on Robbie, played by Luke Bilyk, a human with a drinking problem, who’s ready to give up.

Finding new purpose in life, Anna essentially saves Robbie, and in a way, Robbie helps Anna, and the core of that story is about people overcoming their bad habits. Bale steals every scene she’s in, and I loved the mood between the two actors, particularly in the middle of the film as the characters came out of their shells and start to figure their lives out.

Attica is a vital documentary looking back at the 1971 Attica prison riots, and the way the New York State Police ultimately enacted revenge on defenceless men. At the time, prisoners rioted because of conditions in the facility, and took guards as hostages, resulting in a 5-day standoff that ended in horrible bloodshed, murder, and frankly, torture.

The last 30 minutes of the film are brutal, and difficult to watch, and the details underline the level of racism in the U.S. Director Stanley Nelson’s storytelling is straightforward, talking with survivors of the events to recount the story, and their words are damning. The film also makes you wonder what conditions in prisons are like today, since it seems unlikely that much has changed.

Based on author Graham Swift’s award-winning novel, Mothering Sunday is a gorgeously cinematic film following the life of Jane, played by Odessa Young. Jumping through her life, Eva Husson’s portrait of Jane is about love and loss, told over many years, with an ending that is so beautiful and perfect.

Jane is a young woman working as a maid for a well-to-do family, and she’s drawn into a secret affair with Paul, played by Josh O’Connor, a man well above her station who’s about to be married. The film languishes in this relationship, and one beautiful, heartbreaking day, and while it has some slow, dry moments, the acting and editing are superb, and the passionate story will carry you away.