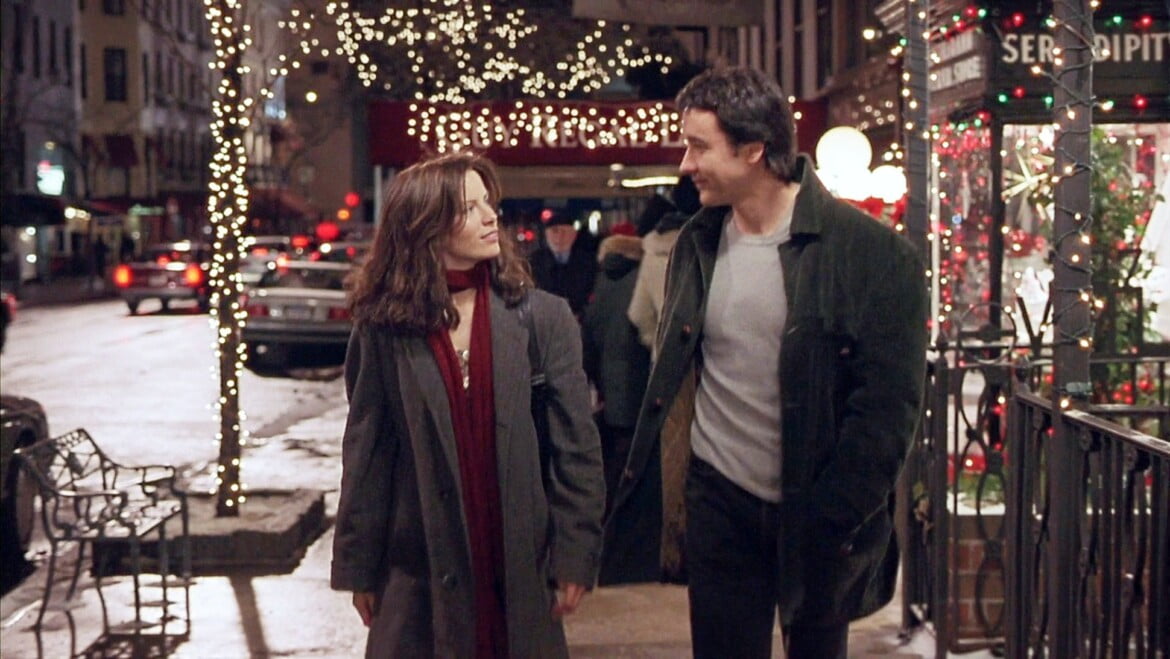 Serendipity is an underrated classic, and 20 years later it’s a rare romantic comedy from the early 2000s that stands apart with a charming cast, excellent chemistry, and original storytelling.

Directed by Peter Chelsom and released in 2001, the film perfectly paired John Cusack and the incredible Kate Beckinsale as two people brought together briefly by strange fate–or at least serendipity–at the wrong time, who hope they can find their way back to each other again, if luck will have its way.

Set against a classic New York City backdrop, including the wonderful Serendipity restaurant, Sara and Jonathan spend only a brief part of the film together, and the rest of the story revolves around their search for each other amidst an impending wedding, an engagement, and an unwelcome world tour.

Serendipity is one of my favourite romantic comedies of the era, and it was a real joy catching up with director Peter Chelsom about making the film, and working with this fantastic cast.

Born in Blackpool, England, he’s both a U.S. and U.K. citizen, and he’s an Honorary Citizen of Fivizzano in Tuscany, Italy.

After training as an actor and landing leading roles on stage and in TV and film, he moved on to writing and directing in his 30s, including the romantic comedy Hear My Song, followed by the comedy Funny Bones. Chelsom went on to make a number of other major films, including the very successful Shall We Dance, and The Space Between Us.

And of course, he made Serendipity. Filmed partly in Toronto, and then premiering at the Toronto International Film Festival in 2001, the film is a charming and funny romantic comedy. Speaking with him about making the film, the locations, and its 20th anniversary, he revealed what he thinks makes it so special. Read the full interview below.

Serendipity is available to stream on digital platforms now.

It’s a pleasure to speak to you today. I’m a big fan of the film, and the whole concept.

“Thank you. I watched it yesterday for the first time in many years and, yes, I was pleased.”

It stands up so well. So many movies from 20 years ago, 30 years ago, they don’t all stand up the same today. I’m curious, now that you’ve watched it again, do you think there was something that you did or some part of the story that you think makes it work?

“Well, whenever I make a film, I tend to create the film’s own world that doesn’t have too many modern contemporary references. I like to create a bit of a dream rather than a film, if that makes sense. And it’s in the same way dreams don’t date, you know, so it’s a slightly heightened reality that I’m always going for. I know it’ll last longer.”

“I have to say… it’s her story as much as his–if anything, it’s more hers–and that was not true of subsequent early 2000s romantic comedies. I mean, I have to say, because I felt at the time were frankly really sexist because I thought they were, you know, the frat boy behaving badly, getting away with it, and all he had to do at the end was apologize to the gorgeous blonde.

“You know, I’m proud of it for the fact that it dates for that reason, that there is that balance. There are a couple of things that, if I had my time again, were maybe a little inappropriate, but on the whole…”

“Also, I was struck yesterday by, ‘wow, this is moving almost too fast in places.’ And then I go, ‘no, it’s fine because it’s the only film Harvey Weinstein never put footage back into, or time back into, because I’d warned him. My director’s cut was 88 minutes, I think, and I said, ‘if you go too long, it’s like a souffle, it really will fall apart because it’s smoke and mirrors.’ You’ve gotta be very careful, you know?”

Well, and to your point about that era of romantic comedies, I love the fact that Sarah is the one who’s like, right at the beginning of the film, she’s essentially says, “no, you have to find me if it’s really meant to be.”

“Look, you’ve got two intelligent actors–that’s what’s good about it. So both of whom at some point are saying, ‘this is insane, but… this is ridiculous, but…'”

“I mean, I’m looking at my notes that I wrote yesterday. I wrote after five minutes, ‘this is so improbable,’ but then you just become seduced. It’s it’s sweet. Yeah.”

What were John and Kate like to work with, because it was an interesting point in their careers as well?

“I made the decision that Kate should just play her native English, British accent, after she auditioned with an American accent. I just thought, ‘no, I want her to be accessible and relatable and warm,’ and I was struck yesterday by how warm she was. I thought she’s so, so adorable, as well as just really bright.”

“I just loved how loose and relaxed she was. Same with John Cusack. I love how fast John Cusack and Jeremy Piven speak. I mean, seriously, if I had to say, ‘what’s the note you give most to actors, especially in that kind of film’, it would be, ‘can we go again please, and can we go a little faster? Can we go a little faster?’ So I loved the ratta-tat-tat of John and Jeremy. It was an easy film, Andrew, to be honest, it was the easiest… they’re not easy, but this was the easiest I’ve ever made.”

How much do you think that setting the film in New York, in the heart of the city, lends itself to the story as well? Because obviously Serendipity–the actual restaurant and everything else–it’s such a romantic ideal.

“Yeah, it’s a bubble inside another bubble, isn’t it? Because I kinda laughed at myself yesterday at the very end when she appears, there’s this beautiful–I used the word “silence”–that I was aiming for where all the music drops away, and there were two soundtracks running at that point. I know what they were. One was called ‘Wind in the Tops of Trees,’ and the other was called ‘Distant English Village, Church Bell.'”

“So it’s not reality, Andrew, and that was my job, you know, because films have to dream sometimes. And especially with a film like this. So New York; creating that bubble within the bubble of New York was fun, and I think that’s why it works, because in the middle of the madness of New York–like the Christmas shopping and the scene with Buck Henry–you feel more cocooned by their story. Does that make sense?

Yes, for sure. I totally agree. It’s a magical spot to play something like this. And I think the locations really do–even the ones in Toronto–really set up that whole tone of being in that bubble. Especially the scene where you get the sense of them being just feet apart, running down the street.

“Exactly. And you noticed of course, the interior at Bloomingdale’s was Holt Renfrew.”

“But the funny thing was outside, you see the girl take the gloves at beginning and because we recognize her from the New York exterior of Bloomingdales, we had to take her to Toronto, because I said, ‘guys, we’ve identified her.’ She’s gonna be carrying it all through the title sequence. So yeah, it was seamless for me, the division between New York and Toronto and I love working in Toronto anyway, but I was seamless. Yeah.”

There are so many parts that I want to talk about, but we won’t have time, but in particular, I’d love to talk about Eugene Levy in this role, because he adds so much fun to a few key scenes. What was he like to work with?

“Brilliant. John Cusack said to me at one point, ‘Peter, that’s the absurdist note I’ve ever heard any director give an actor because knowing that I had Eugene, the scene where he buys the purple suit and stands there and he says, ‘okay, I look like a magician, what’s her number?’ And then Eugene discloses that he doesn’t have the number anyway, and Eugene said, ‘what do I do at this point?'”

“And I said, ‘Eugene, you tap John Cusack on the shoulder, you say, ‘chase me,’ and you run back to your kingdom, the wall of which he’s not allowed to scale. And he said, ‘no, really, what do I do?’ I said, ‘that’s what you do.'”

“And Eugene said, ‘I don’t understand Peter. You’re always talking about truthful and you know, turning it down.’ I said, ‘why don’t we do it when we run through for the crew, and if they laugh, it stays in the movie. If they don’t laugh, it doesn’t.’ They said, ‘okay,’ and of course the crew fell about and it’s in the movie.”

“And then the other one was where I told him that he had a gun and that for one second he was James Bond in the archive warehouse, and the joy of being able to give such absurd, comedic notes to someone who just executes them so naturally. Yes, I would love to work with Eugene again, and I think he with me, yeah.”

All the way through the story, this idea of fate, you do play with it perfectly, interweaving those little moments that lead to each other. And even just dealing in the idea of getting to hear your own eulogy before you’re dead is such a beautiful thing. Did all of that just come directly from the script? Was there any of that you ended up adjusting as you shot?

“A lot of both, to be honest. Marc Klein wrote a really, really good script. There’s a lot of well, how can I put it? There’s a lot of deep thinking that goes into seemingly shallow moments. In other words, it’s my job not to point to myself, but God, you know, everything is done for a reason. So, yes, you have to kind of walk on the set every day with that filter; with that eye, that nothing happens by chance. So you create these little crossovers and coincidences and serendipitous moments. Yes, yes! Of course.”

“It’s like yesterday, I was touched by the ending because he’s sitting there in that silence and the camera just reveals her. She’s blurred, standing in the distance, the glove flew through the air and we go, ‘oh God, let it be her. Let it be her.’ And of course it’s fulfilling our ridiculous dreams is what you try to do. It seduces, it recruits, and by the end you believe, what can I say?”