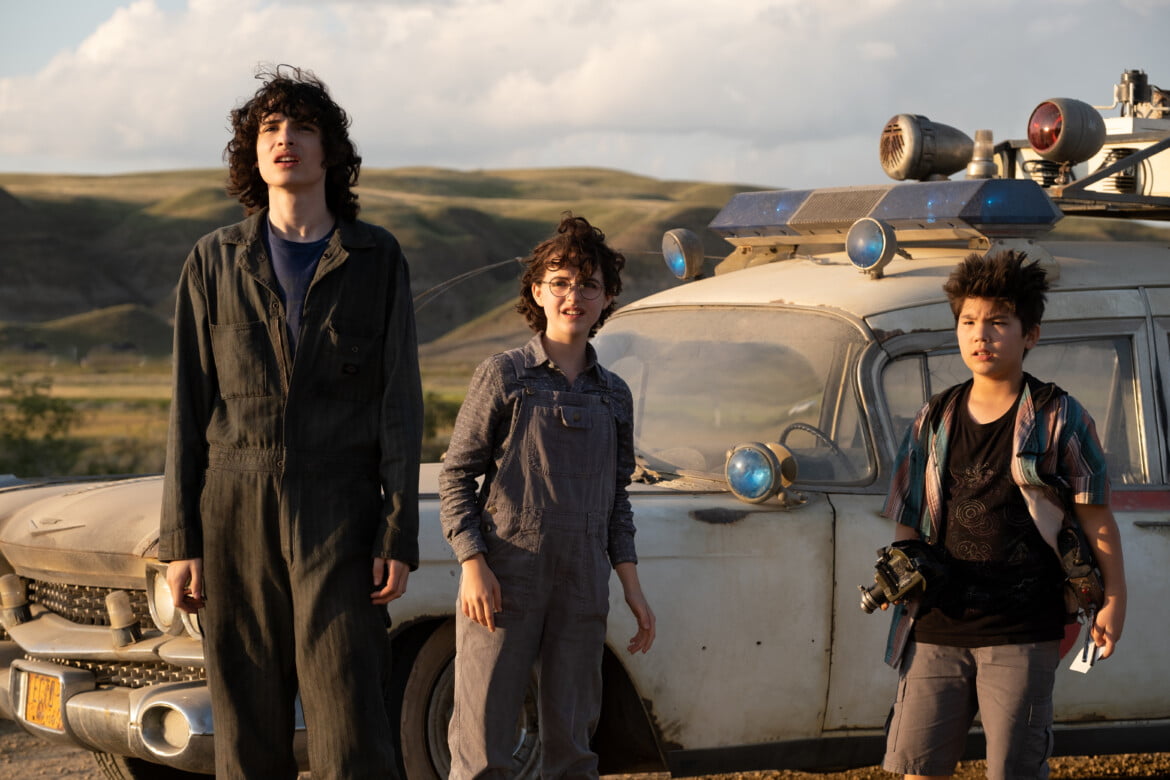 From The Goonies, to Ghostbusters, and The Lost Boys, the 80s had a language for film that felt like the air was a little electric, anything was possible, and you were part of the gang. It’s a mood that’s been often imitated, and rarely done well, but Ghostbusters: Afterlife captures that spirit perfectly.

Early in the film there’s a scene at an old fashioned diner, and it’s the closest I’ve felt to watching an 80s movie again. The dialogue is zippy, and the characters feel like they’ve been let in on a good joke that they’re all sharing. It’s a slightly magical feeling, and it was the moment I really fell for everything that makes Ghostbusters: Afterlife so much fun.

The film starts with the Spengler family getting evicted from their apartment and moving to the middle of nowhere to empty out the home of the one and only Egon Spengler.

Egon passed away unexpectedly (in the middle of a fight with a ghost, as we see it) and his daughter Callie, played by Carrie Coon, is left to clean out her estranged father’s weird, old house. She knows he was a Ghostbuster once, but he vanished from her life when she was younger, so Callie and her two kids–Finn Wolfhard as Trevor Spengler and Mckenna Grace as Phoebe Spengler–just think he’s an eccentric genius who left the world behind.

The little town of Summerville, Oklahoma is a strange spot though. There’s not much around town, except for a main street and an old, abandoned mine–Ivo Shandor’s mine, in fact–but it doesn’t take long for Phoebe and Trevor to start finding some weird things.

In the barn, Trevor uncovers Ecto-1 and starts getting the car–that’s been tricked out a bit since we last saw it–running again, and Phoebe, the resident genius, is trying to figure out why the town has constant earthquakes. What they uncover, of course, is that Egon was on to something, and there are some big spectral happenings underneath the surface of the little town.

Afterlife does a lot to setup a mood and a feeling, not to mention a ton of Easter eggs, that all call back to the original Ghostbusters, and while it’s a bit thick at times, that’s also a big part of the charm of the film. Fans of the original Ghostbusters will love the way this story fits neatly beside the 1984 classic, but Afterlife also succeeds in a story that invites anyone into this world to meet these characters, whether they’ve seen the first film or not.

And all of the original cast turn up for a few minutes, from Bill Murray and Dan Aykroyd, to Ernie Hudson, Annie Potts, and Sigourney Weaver.

In a lot of ways, there are a lot of moving parts that help make the film’s sweet nostalgia work so well for the story. The spectral effects from the original film have been painstakingly recreated and upgraded, without losing any of their charm. Rob Simonsen’s score frequently revisits some of my favourite music from the original film, from the ethereal notes, to the use of piano, brass, and woodwind.

And the film looks fantastic. The cinematography by Eric Steelberg, the art direction by Bill Ives, and the special effects all work together to bring the ludicrous and the creepy together without missing a beat.

Everything works so well because the performances are also wonderful, too, like Mckenna Grace as the oddly charming, direct, and funny Phoebe. She channels a lot of what Harold Ramis brought to Egon in the most wonderful ways, and that mood, and the very real sense of Ramis’ spirit, is a huge part of Afterlife.

The cast also features the great, young Logan Kim as Phoebe’s school friend, the eccentric Podcast, and Paul Rudd as their teacher, Gary Grooberson. Quite a few characters feel like they’re echoing characters from the original film (Gary is just a bit of a modern counterpart to Rick Moranis as as Louis Tully), and while that’s a lot of nostalgia at times in one film, Afterlife feels so genuine.

In a big way, that feeling, and the best parts of the story, all tie back to Egon.

Writer and director Jason Reitman, and co-writer Gil Kenan, have created a beautiful farewell to the character, and to Ramis himself, and they make it work thanks to some very, very impressive digital effects, as well as great performances. Reitman’s direction with this group of young and grown-up actors brings creates an enticing mood, especially in the final moments, and he does a great job following in his father’s footsteps.

Afterlife also makes a big effort to wrap things up in a way that opens a few doors, and I love the character who helps make that happen.

Clinical nostalgia has turned me off from a few films over the last few years, but Ghostbusters: Afterlife is different, and it’s an easy film to enjoy. It’s a lot of fun, the script is zippy and lively, the cast is excellent, and for the longtime Ghostbusters fans especially, you’re going to love how this wraps up the legacy of the original characters.

There’s also a cameo that I won’t spoil, but I’ll say it felt like perfect casting. And watch right until the end, because, yes, there is an after-credits scene worth seeing.

The 4K UHD Blu-ray looks phenomenal, it sounds amazing, and there are some great special features worth checking out. You can watch “We Got One!” for a look at some of the big Easter eggs, there’s a look back featurette on the original film, and an excellent feature on the special effects.

Other extras include A Look Ahead, Bringing Ecto-1 Back to Life, The Gearhead’s Guide to Ghostbusters Gadgets, deleted scenes, and Summoning the Spirit: Making Ghostbusters: Afterlife.