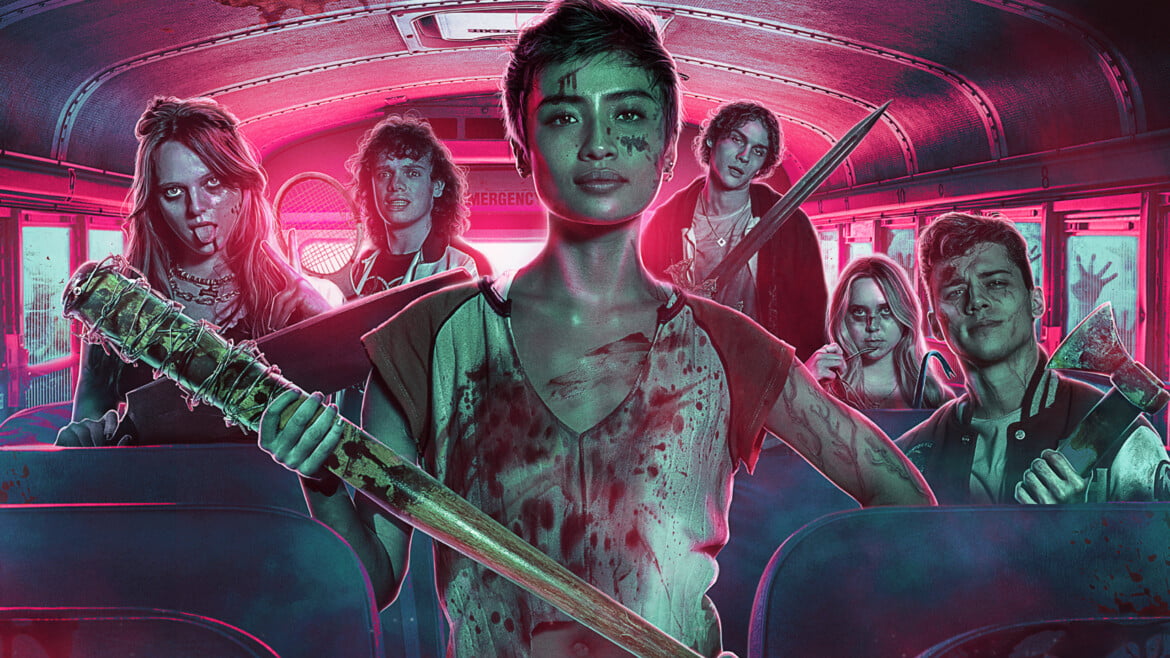 Unhuman is a field trip from hell, as a group of high school misfits fight to survive blood-thirsty monsters, unless the students end up killing each other first.

Brianne Tju stars as Ever, and she’s put to the ultimate test of survival when her group gets attacked on their school bus while they’re driving in the middle of nowhere. She’s fighting alongside a group that can’t get along, including Randall, played by Bejamin Wadsworth, and Danny, played by Uriah Shelton.

And then things get worse.

Talking about their characters, and what it’s like to work on a Blumhouse project, Tju, Wadsworth, and Shelton shared some details about why they loved making Unhuman.

“In the beginning, Ever is someone who doesn’t really think very much of herself,” Tju said. “She’s kind of one of those people that’s like, ‘let me just get through high school, and survive,’ which I guess is a pun in terms of this film. And she’s like, ‘and then my life can start when I get out of this hellhole,’ right?”

“But I think she learns very quickly that it’s not enough to just hide yourself away. At some point you have to utilize the voice that you have, and she goes through this self-realization and self-empowerment, and it’s thrilling to watch, and it was cathartic for me to do because you see her come into her own and find her voice.”

She compared the film to the quintessential Breakfast Club, that gets turned on its head.

“What’s so great about having this very talented ensemble cast is that they all start out one way with their facades, and throughout the film we see them slowly transform and learn and grow, and they deal with their inner demons that get stripped away, or they have to acknowledge these inner demons and work through them in order to survive.”

Wadsworth agreed with me about the film, “It is a juicy role,” he said. “That’s definitely what attracted me to the role in the first place. I wanted something that was different and in a little darker. My character’s very quiet and to himself, and he is very standoffish and protective of his autonomy. He will do anything he can to protect himself and his friend, [but] mostly himself.”

And as Shelton added, “We got to explore some really dark stuff, and that’s one of the best parts of being an actor is that you get to kind of step into these places where it normally wouldn’t be okay to, and I don’t know, you just get kind of trying to take a walk in someone else’s shoes and, the effects, the stunts, I loved all of it. I’m really happy how that came out.”