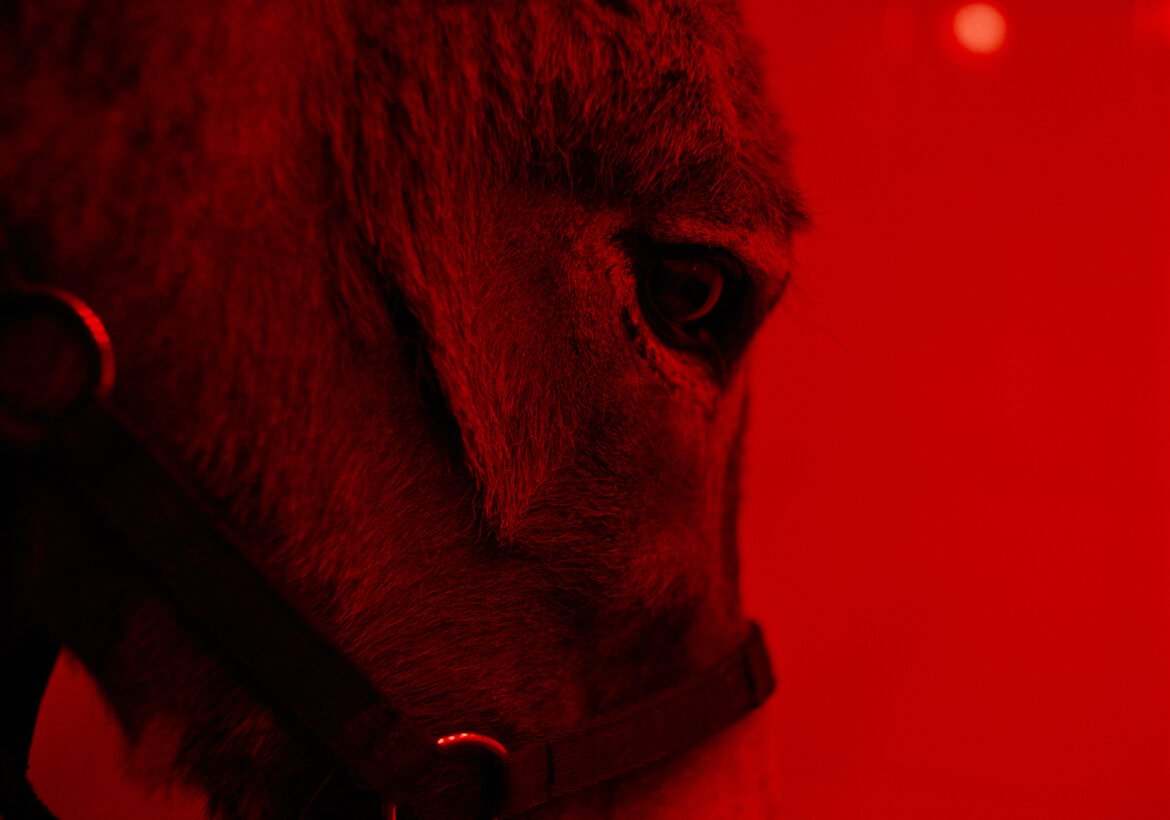 For his first feature in several years, veteran Polish filmmaker Jerzy Skolimowski takes a passionate and unflinching look at the human relationship with the animal kingdom from the perspective of a wayward donkey in EO, Poland’s official selection for this year’s Best International Feature Oscar competition and winner of a jury prize at Cannes. While many filmmakers have mounted similar narratives about human nature told from the perspective of animals (most notably Robert Bresson’s Au hasard Balthazar, which this closely resembles), EO is a welcome addition to that tradition of filmmaking thanks to Skolimowski’s ability to find a wealth of emotion in relative silences and observations. Some of the humans in EO talk a blue streak, but nothing here is more expressive than Skolimowski’s virtually silent star.

The titular donkey (actually played by several different, but similar looking animals) is on an unlikely quest after being freed from a hopeless life as a circus performer in a travelling show run by a scrapper who abuses him. This severing of ties forces EO to not only leave behind the handler and performer who cared for him most (Sandra Drzymalska), but also without any roots. While the eternally curious and innocent EO still experiences moments of joy and love on his seemingly aimless journeys through cities and countrysides alike, the soulful creature often bears witness to unspeakable hardships and acts of violence committed against other animals, humans, and even himself.

EO is a free wheeling fable where a donkey floats into and out of the lives of people that either show tremendous appreciation or regard him as a literal beast of burden. In the span of a single day, EO finds himself unwittingly at the scene of a brutal crime and protected by a wayward gambler (Lorenzo Zurzolo) who’s at odds with his wealthy stepmother (Isabelle Huppert). It’s a whirlwind life filled with momentary highs and soul crushing lows. The humans and other animals only pay EO as much mind as they have to, but Skolimowski’s eye penetrates the donkey’s gaze to reveal the subtleties of animal behaviour. EO is like a refugee in a lot of ways, constantly being forced into situations where he has to adapt to new sets of rules and customs, some of which leave the animal ill at ease. 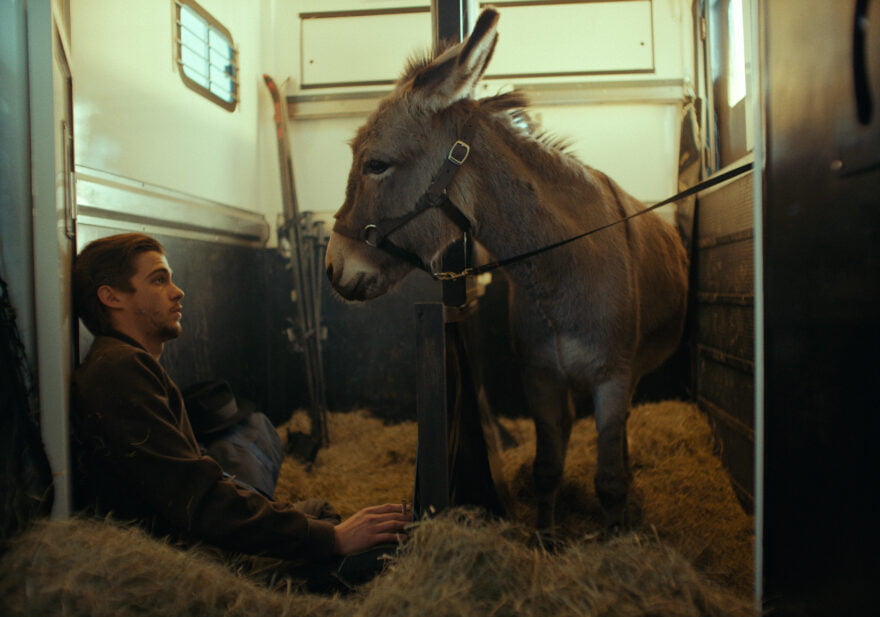 EO is capable of showing joy, bemusement, contempt, love, sadness, curiosity, and melancholia without needing to vocalize his thoughts. While some humans – most notably his former handler and the aforementioned gambler – find ways to make deeper connections to the animal by trying to carry on a conversation, mostly everyone else in his path offers only the most basic of acknowledgement, perhaps best exemplified by the dichotomous relationship he unwittingly has between the fans of two rival soccer clubs. It’s not so much about how the humans react to EO, but how he reacts to the humans.

Skolimowski (delivering his best work since the 1980s) regards the donkey’s reactions as honest, unfiltered reflections, with some inventive first person (or in this case, first donkey) cinematography and Pavel Mykietyn’s elegant score propelling things nicely along. At times Skolimowski leans too heavily on bright red lighting and strobing effects that are heavy handed, but whenever the filmmaker simply stops to look his star straight in the eye, EO becomes a work of unforced beauty and tragedy. It’s a film that balances harsh truth with an almost childlike sense of wonder and anxiety. It’s not always an easy film to sit through, but EO certainly balances one of the toughest tones of the year with grace and thoughtfulness.

EO opens in select cities (including in Toronto at TIFF Bell Lightbox) on Friday, November 25, 2022.

EO (Trailer) from filmswelike on Vimeo. 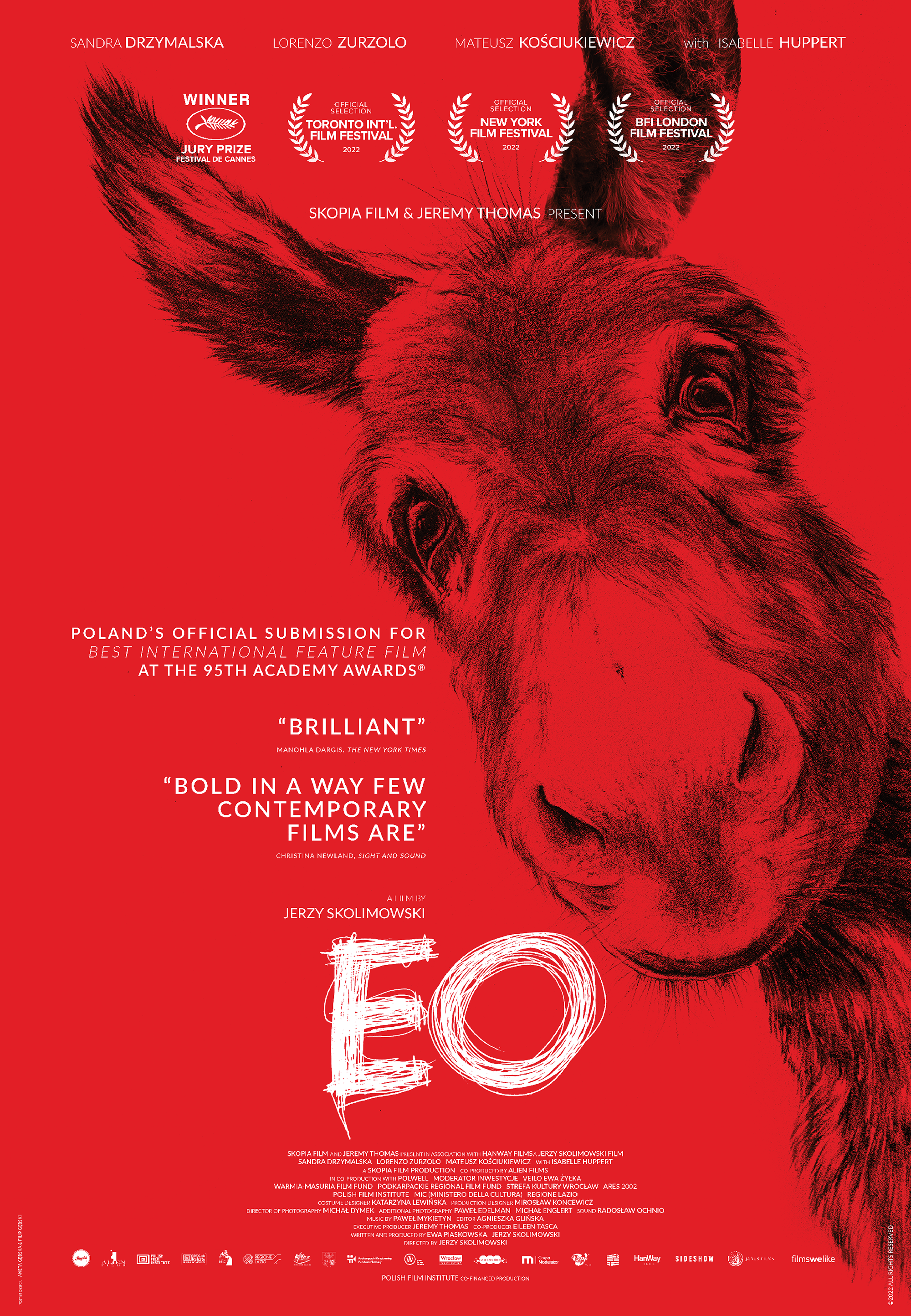