Film Friday: ‘Kick-Ass’ and ‘Death at a Funeral’ 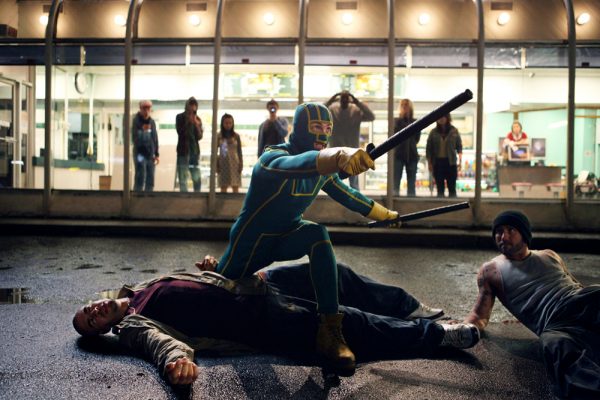 Opening this weekend at a theatre near you, Aaron Johnson stars in the action-comedy, Kick-Ass; plus a look at the Americanized comedy, Death at a Funeral.

Stand aside Wolverine, Spider-Man, and all those other super-powered heroes, there’s a new set of crime fighters in town, and they’re doing things a little differently.

Kick-Ass is the latest comic-book adaptation to try to take the usual hero story and make it into something new, and although it was influenced by most of the superhero movies that have come before it, most notably Spider-Man, this is a uniquely fun hero story for a change.

Based on Mark Millar’s Marvel series of the same name, Kick-Ass is about an average dorky, comic-book-loving teenager named Dave Lizewski, played by Aaron Johnson, who decides that he can’t just sit around any more and ignore the daily injustice around him.

While the girls ignore him at school, Dave decides to secretly give himself an alter-ego that no one can ignore. Buying a green and yellow diving suit off the internet, Dave tries to train himself to be a hero for those people out there who need a little saving, and it takes just one incident to turn him into a national sensation.

This not only sparks interest in his alter-ego, Kick-Ass, but also inspires some others to come out of hiding and do some good as well.

Dave’s plan to be a hero starts out okay, and his MySpace page is the stuff of legend after he saves the day once, but it only takes one bad move to turn everything sour. Inadvertently stumbling into the den of some heavily armed thugs, Dave is easily outmatched by the crew of criminals. he is only saved thanks to one little girl named Chloe and her dad, played by Mindy Macready and Nicolas Cage, respectively.

While Dave has been trying to prove himself as a hero, Chloe already is a hero, trained by her father to be the ultimate weapon against thugs and criminals. Calling herself Hit-Girl, Chloe saves the day by wiping out the entire room full of bad guys using a few very sharp knives as her father, AKA Big Daddy, keeps a watchful eye on her progress.

For Dave, trouble begins because no one else actually knows that Hit-Girl and Big Daddy exist, so when mob boss Frank D’Amico, played by Mark Strong, discovers some of his men have been killed, Frank takes it personally and starts plotting to take Kick-Ass out.

Film in Toronto, which sits in for New York City, Kick-Ass has a dark and serious back-story, hilarious script, and bloody good action throughout. It was everything and more than I could have expected in an action movie, particularly because it’s also funny, and a little heart-warming.

Director Matthew Vaughn knows how to lighten even the bloodiest and most action-packed scenes with clever, comic asides, and some light romance between Dave and his dream crush at school.

Vaughn also seems influenced by films like The Watchmen adaptation, or even The Dark Knight, giving characters like Big Daddy grit, and heart that helps grounds the film in a slightly darker reality.

In terms of casting, the whole troupe is appealing, especially Cage, Macready, and Johnson. Cage gets the darkest scenes, and Macready is just amazing as this tough-as-nails kid, but Johnson is also a great lead, making you believe he is a geek looking to make more of himself. He shows both heart and ingenuity in this role, which certainly demanded a lot.

At the same time, Vaughn knows how to lighten the film’s dark mood, as he does in many of the scenes where Chloe is taking out bad guys. He also makes great use of the lighter character like Chris D’Amico, played by Christopher Mintz-Plasse, and Dave’s best friends, Marty and Todd, played by Clark Duke and Evan Peters.

What’s notable is that Kick-Ass is a lot more bloody and violent than most people will expect from the trailers. That violence works in different ways throughout the film, but in particular I think it grounds the film, which otherwise would have been far too fluffy. It may be a turn off for some who might merely expect a Spider-Man level of violence, but if anything, Kick-Ass is like a funny version of what the recent Wolverine film should have been; a fact Vaughn even lightly touches on.

Although I know it’s going to be a big year for action movies, I think it’s going to be tough to top Kick-Ass, at least in my books. The good news is also that, if you enjoyed Kick-Ass as much as I did, there will likely be more films to come down the road.

Also opening this week is Neil LaBute’s American adaptation of the very British 2007 comedy, Death at a Funeral.

Using the same name, the Americanized Death at a Funeral follows a nearly-identical script, but uses a black cast instead of the very white family featured in the original.

Starring Martin Lawrence, Chris Rock, Tracy Morgan, and Zoe Saldana, to name a few, the story follows a family as they try to deal with the loss of their much-loved father and husband. This tear-filled day is only marred by the fact that everything seems to be going wrong as the family fights, the wrong casket is delivered, and the family is even threatened with blackmail.

Although the cast looks pretty good, the truth is that the original British film wasn’t that funny to begin with. It was simply marred by simple and silly dialogue that wasn’t as funny as it could have been. The right cast and director can make a big difference, but LaBute’s Death at a Funeral is still not getting great reviews.

As Armond White of the New York Press wrote, “Despite a few more laffs than the British original, the cast seems to be operating on auto-pilot–the sort of regular clownishness that lets director Neil LaBute make his standard implication that nothing in (black) American life is to be taken seriously.”