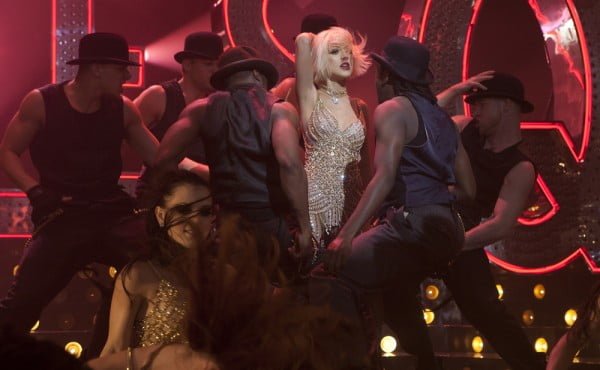 Christina Aguilera in a scene from Burlesque

This week’s new releases include: the musical Burlesque, starring Christina Aguilera; James Franco’s drama, 127 Hours; the farcical dramatic comedy, Love and Other Drugs; plus a look at Faster, and Bambi.

Burlesque suffers though because Antin and film editor Virginia Katz constantly stumble all over each other. Initially, it was the editing that drove me nuts because Katz’s edits are frequently bone-jarringly timed, cutting scenes at moments that do not feel natural, or missing important continuity errors. Overall though, it’s obviously Antin who deserves the blame for this film’s downfall.

The choreography is also acceptable, but it’s basically music video lite routines, which is hardly mind-blowing, and it reminds me all too much of Antin’s sister’s work with the Pussycat Dolls: choreography which I would hardly call big-screen worthy.

Aside from her vocals, Aguilera is a surprisingly wonderful lead. She stands out in all of her scenes, and she nailed the cutesy girl routine. She also had great chemistry with Gigandet, and with Cher for the brief moments they shared the screen.

The characters only go so far when you look at the whole picture though, and Burlesque is simply too silly, unconvincing, and safe to make it worth watching.

The Blu-ray edition includes a lot of extras, from an alternate opening, commentary, and a jukebox of the show’s musical numbers to a number of featurettes on the film’s cast, production, clothes, and choreography. Burlesque also includes one of the unfunniest blooper reels I’ve ever seen, which seems all too appropriate.

Worthy dramas come along but once a season, but this one might not be the best choice of films for everyone, particularly the squeamish.

Based on the real story of Aron Ralston, whose harrowing tale of survival swept through the media a few years ago, the Oscar-nominated film received rave reviews from critics and fans alike since it debuted at the Toronto International Film Festival last September.

James Franco stars as Aron, a young party boy who goes on a hiking expedition alone into the remote canyons near Moab, Utah. When an accident leaves his arm trapped beneath a boulder, Aron takes a new serious look at his life and vows to make it out of his predicament.

As most people know, the harrowing part of the tale is that Aron cut off his own arm with what little tools he had with him so he could finally escape.

While the reaction to the film has been strong, there’s no question that this part of the film has caused various reactions from viewers, so it’s safe to say it’s not for the squeamish, but the reviews of the film have been beyond glowing.

Joe Morgenstern of the Wall Street Journal wrote, “Mr. Franco is simply terrific, and Mr. Boyle’s trademark exuberance creates a dizzying succession of images that get the movie not only out of the canyon but into its hero’s mind.”

Dan Kois of the Village Voice reflected that same sentiment, calling the film “A passionate, bloody argument for engagement with the world.”

Featuring somewhat goofy, sometimes even zany performances, Love and Other Drugs is an amusing farce with a glossy reality-lite approach to relationships and the big-money industry of pharmaceuticals that is compelling at times, but it’s a little awkward.

Leaping back and forth between the love affair, and a soft running commentary on the trouble with drug companies, Love and Other Drugs wants to be a lot of things and that unfortunately makes it messy and strained.

The chemistry between Hathaway and Gyllenhaal is fantastic though, and pretty much saves the film, while Gyllenhaal also delivers a charming performance in a role that could have been downright scummy otherwise.

For a weekend’s amusement, Love and Other Drugs will at the very least keep you entertained.

For the action junkies, Dwayne “The Rock” Johnson stars in George Tillman Jr.’s shoot-’em-up about Driver, an ex-con who is trying to find out who murdered his brother during a bank robbery gone wrong. As he hunts down his man, he’ll have to deal with a hit man who is gunning for him, and a veteran cop played by Billy Bob Thornton.

Disney’s animated classic comes to Blu-ray for the first time this week, bringing one of the studio’s best-loved films to a whole new generation of kids and families.

Originally released in 1942, Bambi has been restored to modern-day brilliance and of course the Blu-ray comes with oodles of extras for the young ones and Disney fans alike.