A history of Elliott Brood ten years on 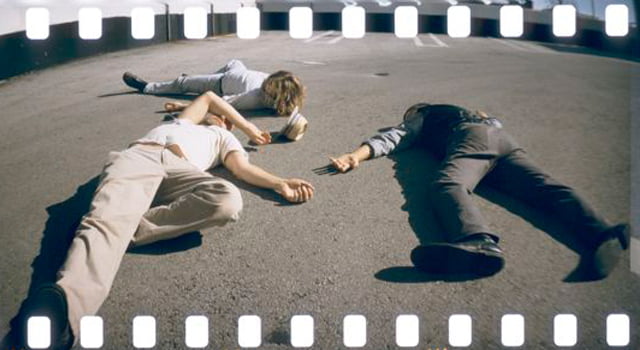 Elliott Brood are a band drawn to history. Their most recent album Days into Years was inspired by a visit to a military cemetery in France where Canadian veterans are buried. The album before that, Mountain Meadows, despite the deceptively peaceful title, was named after a massacre.

When I spoke to Stephen Pitkin, the band’s drummer, over the phone on a hot summer day right before festival season, he told me of his fascination with old abandoned roads. The ones that were once major roads but fell into disuse when bigger ones were built. He always wonders where they go, and what can be found at the end of them. He also talks about Hadrian’s wall with a sense of awe.

“In Europe it opens up a lot more and you start to see visual, epic kind of evidence of days gone by and eras gone by,” he tells me. “It’s about three feet high, four feet high and it was guarded every few hundred metres or whatever by Roman guards and they kept the Scots out, so that goes back like 2000 years.”

While touring Europe they stumbled upon a WWI cemetery in France near the site of a major battle. The band were so taken by the place that they felt compelled to write an album on the subject of the war and imagining what it would’ve been like for the soldiers.

“It’s turned into albums by virtue of just imagining what kind of went on at the time and not really like re-describing the battles per se but more like describing what the soldiers might have been going through,” Pitkin reflects. “It kind of went over a number of those subjects, like from leaving your house to being engaged in battle, being with a comrade who’s essentially dying.”

Their 2009 Polaris Prize shortlisted album Mountain Meadows was likewise inspired by a fairly gruesome historical event. Though that time they didn’t actually visit the site in question until after the fact. They wrote the record entirely based off research from books into what happened. “There was some espionage and some warring of different factions at the time between the Mormons and the government and the Indians,” says Pitkin.

The massacre took place in 1857 in Utah when a wagon train destined for California was attacked, killing about 120 people.

While on tour in the U.S. the band visited the site of the massacre. “It’s a really desolate place and it just seems like you’re in the middle of nowhere,” says Pitkin of their visit. “You have to go off the highway about ten miles and it’s just in this deserted area, yet there’s a flag there, there’s a monument and they sort of keep it up. Took a bunch of pictures while we were there because once you go to a place where there’s a story like that you can kind of set yourself in the time.”

Elliott Brood formed ten years ago and released their first record Tin Type in 2004. They have since four more records. Their early success came with the explosion of “Oh, Alberta!” on college radio in 2004. (It was very popular at the University of Lethbridge.) They’ve recently had similar success with “Write It All Down For You” making waves in Indie and hipster circles.

They are celebrating their tenth anniversary with a re-release of Tin Type and the addition of a b-side of three songs that didn’t make the record. “It was only six songs and done really quickly so there were a bunch of other songs on the burner at that time that never made it,” explains Pitkin.

Pitkin mastered Tin Type and then joined Elliott Brood because they were looking for a drummer. When I ask him about how the band has changed over the past ten years he responds in part as a sound engineer.

“The first EP was like eight tracks per song and when we added the b-side to Tin Type we’re like yeah let’s keep it at eight tracks again and we’ll try and keep that same thing and then when the first song went down it was like 52 tracks,” he says of the re-release. “Our mode of recording and song writing has changed a lot. Instead of one mic on a vocal sometimes there’s two mics or three. Two close up and one far you track it all at once but that’s sort of an engineering thing but the song writing has expanded the same way.”

The band has also solidified, making music their careers. “The first five years was the development of the band you know so I think we went from straddling day jobs and finding ways to pay our way through going on tour and not making money and those kinds of things,” says Pitkin. “Now it’s a corporate entity, we are a band, you know I’m filling HSTs.”

Elliott Brood played at the 2013 Calgary Folk Music Festival and are currently on tour across Canada, including Ontario, Manitoba, Alberta, British Columbia, and Saskatchewan.