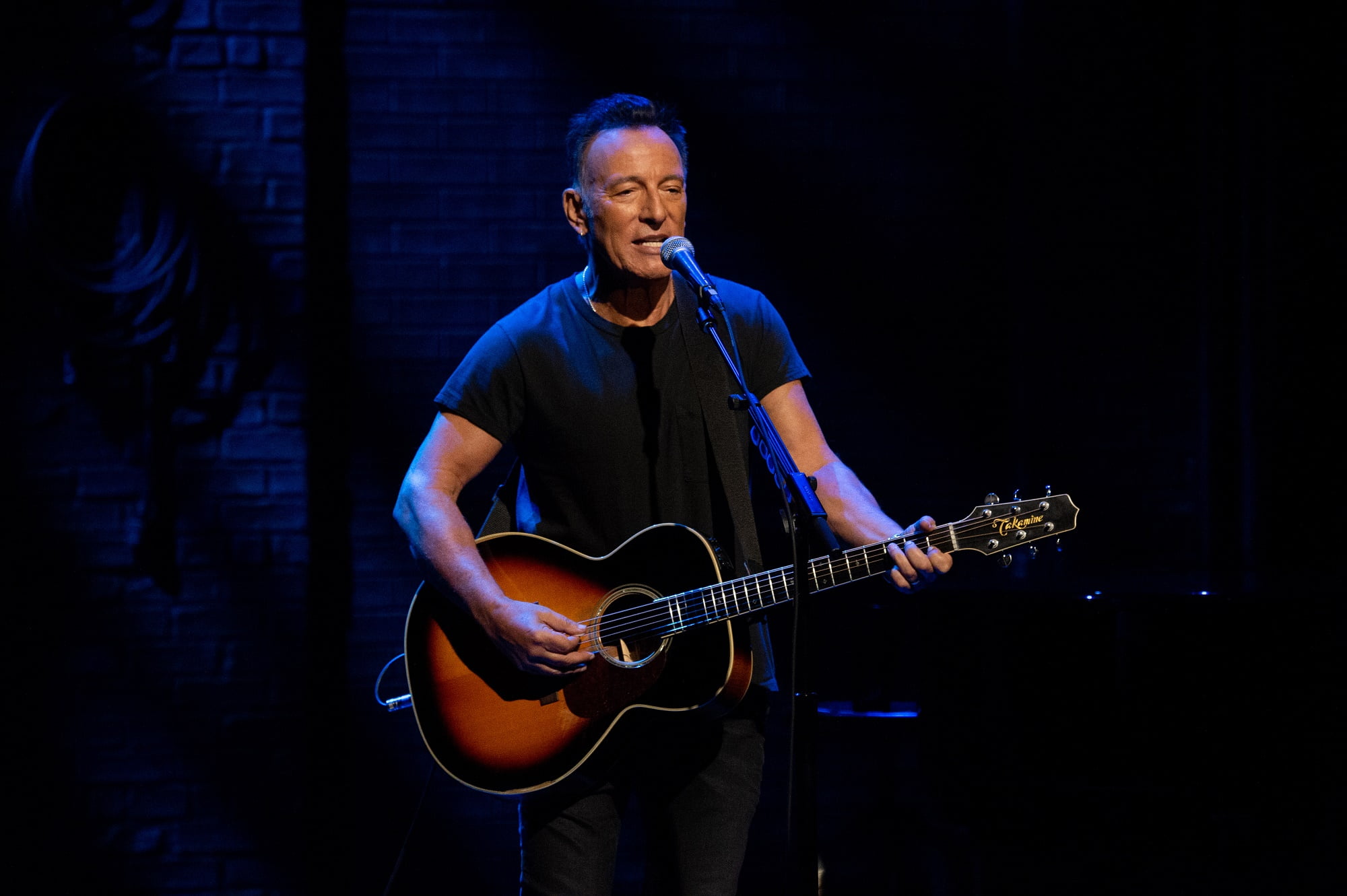 A remarkable and captivating blend of autobiography, performance, and motivational speaking, Springsteen on Broadway distills everything that makes one of America’s greatest singer-songwriter-rock stars such a formidable, genial, and inviting personalities into a single, visual volume. Releasing on Netflix the day after Bruce Springsteen wrapped up a phenomenal 236 performance run at the Walter Kerr Theatre in New York City, it’s a combination of spoken word and stripped down performance that amounts to one of the best one-person shows ever mounted. It’s easy to see from frequent collaborator and director Thom Zimny’s concert film why Springsteen on Broadway was such a powerful cultural phenomenon, and now that’s it’s available to share with a larger audience, it’s greatness will assuredly live on.

There’s not much to Springsteen on Broadway, nor does there necessarily need to be for it to make a maximum impact. Bruce Springsteen stands court atop a stripped down stage with a brick backdrop and only a mic stand, a handful of monitors, some gear crates, and a piano surrounding him. He plays the guitar, harmonica, piano, and nothing else, speaking directly to an audience in the theatre that we never see until the show has wrapped, and sometimes staring straight down the camera lens to talk to whoever might be watching from afar at any given time. The only guest to take the stage alongside The Boss is his wife, Patti Scialfa, and she’s only around for a single number. For two and a half hours, Springsteen tells stories about his vast experiences, plays a handful of his hits and deeper cuts, and muses about the state of the world across his lifetime. Early on, the man from Asbury Park, New Jersey says that his show – and indeed his career – has been somewhat of a longform magic trick, culminating in what’s essentially the fulfillment of a promise he made years ago; a vow to share his story with the world.

Springsteen on Broadway isn’t only a testament to Bruce’s talents as a musician, but a masterclass in stage presence; a rock and roll revival meeting with the power of a thousand TED Talks. Even if Springsteen performed this show night after night, he’s one of the few people who could pull it off and make it feel fresh every time simply by being himself. While some might rightfully point out similarities between Springsteen on Broadway and his lengthy, comprehensive written autobiography, Zimny’s film shows there’s no substitution than hearing these stories coming directly from the mouth of the man himself. 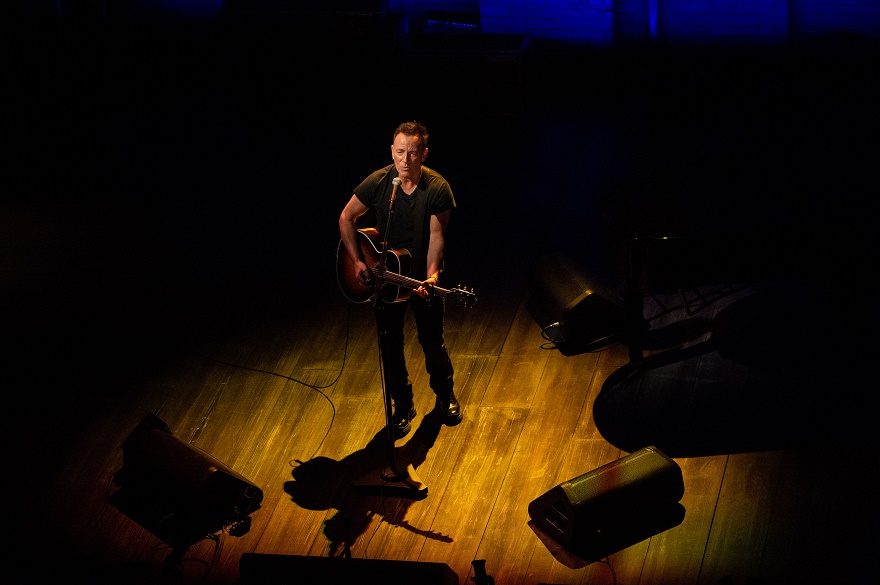 Bruce Springsteen is living proof that human beings can be both confident and humble at the same time. Even as a young man, paying his dues with shitty gig after shitty gig, he was steadfast in his belief that he was better than most other musicians getting radio airplay. Looking back on it now, he’s in disbelief that he became as popular and successful as he did. He thinks himself a bit of a hypocrite; a man desperate to leave his old hometown only to move twenty minutes away as an adult; someone who had no personal experience as a labourer, but constantly wrote blue collar songs about the plight of the world’s workers; a man who never had a job that required him to show up five days a week before he signed up to do Springsteen on Broadway. At the same time, Springsteen knows he’s just that good. He’s swaggering, self-effacing, and remarkably humane, frequently stepping away from his microphone, not just because he knows his booming voice can fill the theatre, but also because he doesn’t feel the need to hide behind any sort of machinery to make a connection to people. He boasts a childlike love for cheeky, punctuating profanity that’s funnier than most working stand-up comics, but he speaks like the old soul he’s become; a man perfectly at home in a Broadway theatre and arenas alike. I frankly have no idea how he does it, and Springsteen on Broadway will leave anyone who sees it – be they obsessives or the uninitiated – equally in awe of his accomplishments.

Springsteen on Broadway features more stories than songs, but they’re delivered by someone who’s always been a masterful storyteller. He talks with equal lovingness about his mother’s sunny disposition and his father’s struggles with depression. He confronts his own sense of privilege through a chance poolside encounter with Born on the Fourth of July author Ron Kovic. He speaks mournfully about the loss of his friend and E-Street Band saxophonist Clarence Clemons and with great fear about the current state of American affairs, confronting his own mortality in the process as he pushes seventy years of age. These stories often lead their way into songs, but Springsteen is savvy enough to never give into the cliche of an aging rock star explaining in great detail how each of the works were crafted and what they ultimately mean. He eases into the musical portions of Springsteen on Broadway with grace and poise as if the songs were always stitched into the fabric of those stories.

It’s all surprisingly emotional, even if one doesn’t consider themselves a Springsteen expert, and the two and a half hours fly by so briskly and unnoticeably that one wishes there were more. But Springsteen has given the audience more than enough. He knows that people still want to hear from him, but he understands how long they’re willing to give him. It killed on stage every night, but now that it’s available to a larger pool of viewers, Springsteen on Broadway becomes one of the most relaxing and reflective exercises in film, music, and television this year. As Springsteen says late in the show, it’s something that can be enjoyed in good times and bad with equal resonance.

Springsteen on Broadway is available to stream on Netflix starting Sunday, December 16, 2018.

Check out the trailer for Springsteen on Broadway: