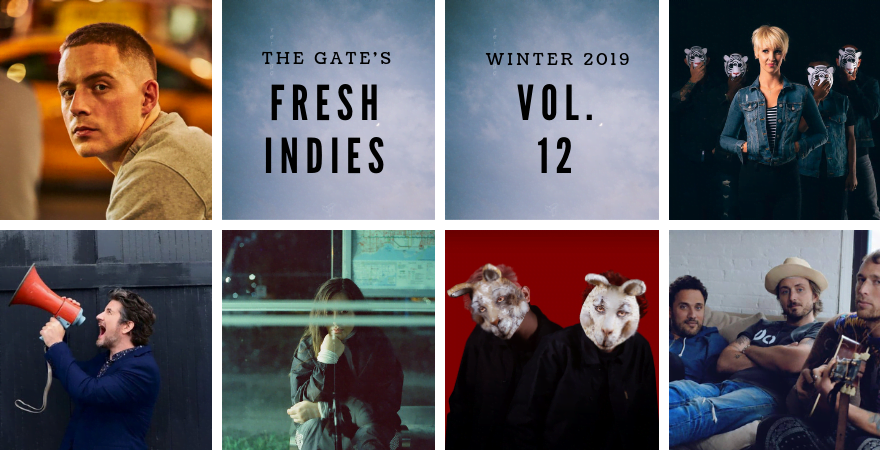 We’re gearing up for a fresh new year of Fresh Indies, and to kick things off, we’re featuring a few singles we loved from the end of 2018. Featured artists include Dermot Kennedy, Whyte Tygers, Matt Nathanson, ASHS, AmPm, and Gone Gone Beyond.

Dermot Kennedy – “Power Over Me”

Dermot Kennedy is one of the freshest voices I’ve heard in a long time. The Irish singer has a raw and emotive style that’s astonishing, and his song “Power Over Me” is just about the most perfect indie pop song I’ve heard in months.

Kennedy will be touring extensively in 2019, with shows in Canada, the U.S. and Europe, including the O2 Academy Bristol, Glasgow SWG3, and Albert Hall in Manchester.

Listen to “Power Over Me” below and get more info about Dermot Kennedy at dermotkennedy.com.

“Don’t Hesitate” is an addictive “seize the day” kind of single, and beyond the gorgeous vocals, the song’s ear-wormy rhythm will certainly get you moving. One listen is also not enough, so I listened to it five times while I wrote this, and I’ll probably give the track a few more listens tomorrow.

Whyte Tygers are “bride & groom” singers and songwriters Heather Lee and Jordan Wynn, with a “kicking rhythm section” that they say is rooted in the sounds of 60s-era R&B.

Matt Nathanson – “Used To Be”

Matt Nathanson is about as suave as they come, and his single “Used To Be” is everything I love about his style in one 3-minute track.

The sweet, nostalgic song is all about living in the past, fond memories, and it’s of course rooted in his slightly raspy, debonair vocals.

“Still got the same old number, still drive the car you hate… Maybe I’m deep down hoping, you’ll come back to yell at me like you used to do.” Watch the video for “Used to Be” on YouTube.

Who is ASHS? The singer, with a secret identity I might add, released her single “Without You” recently, and it’s a fresh, electro pop single that has a great beat, and sweet, light-as-air vocals.

The single is the artist’s follow-up to her debut EP, 3AM and the single “More Than Friends”.

“‘Without You’ is about that moment when the smoke clears and you’re finally able to acknowledge that the person you were with wasn’t as good for you as you first thought,” she said. “It’s the realization that you have put in more than you got out, and that you just need to take a step back and breathe. The feeling of numbness and uncertainty of what life is now going to be like without that person. That first breath of air.”

AmPm feat. Gloria Kim – “Who Do You Love”

“Who Do You Love” hits all the right beats. The single from Tokyo’s AmPm is a fun, confidant, track that will get you moving. I was humming along with the track on the second listen, and by the third time I had it stuck in my head for hours.

The band’s first single, “Best Part of Us” earned more than 10 million streams on Spotify alone, and they were the top Japenese artist on Spotify. “Who Do You Love” looks like it’s set to repeat the same success too.

AmPm played the Spotify On Stage show in Jakarta, and they were the only artist from Japan, and they also played Ultra Music Festival in Miami.

I’m finishing off this edition of Fresh Indies with a song that slows things down, thanks to Gone Gone Beyond and singer Kat Factor.

“You Can’t Go Wrong” puts the world on pause, and it feels refreshing, like you’re taking a break for a few minutes. The style and tone are just a disconnect from the world, and it’s wonderful, especially with the vocals that really put things in perspective.

The band was born out of composer and producer David Block’s vision, and blends a mix of soul, folk, world, and electronica. To date they’ve played Coachella, Lightning in a Bottle, Red Rocks, Grace Cathedral, and even the U.N General Assembly.

Stay tuned for our latest volume of Fresh Indies and send us your music on SubmitHub.