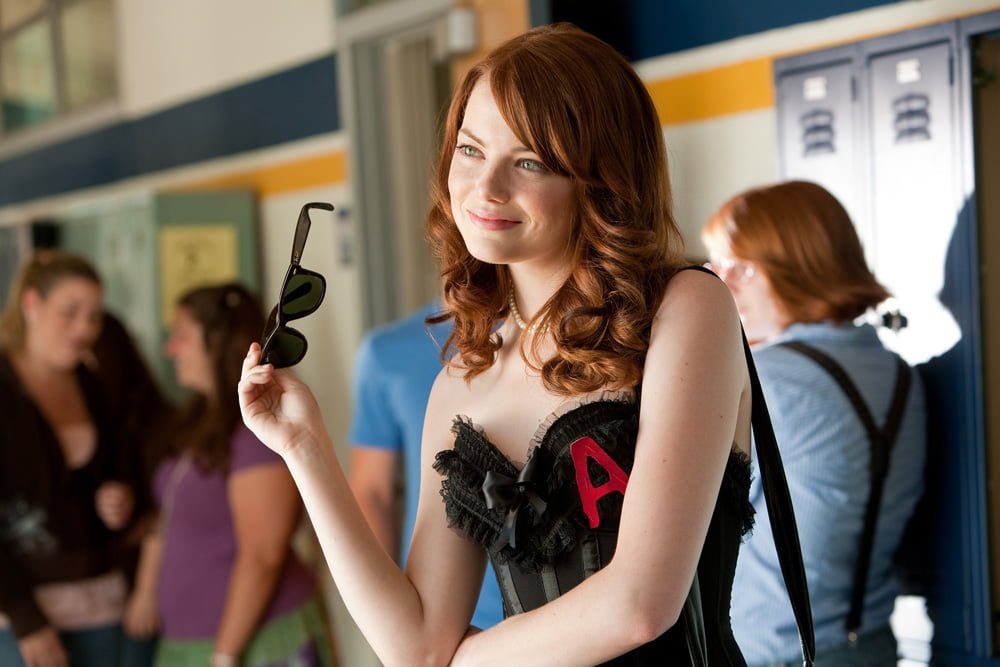 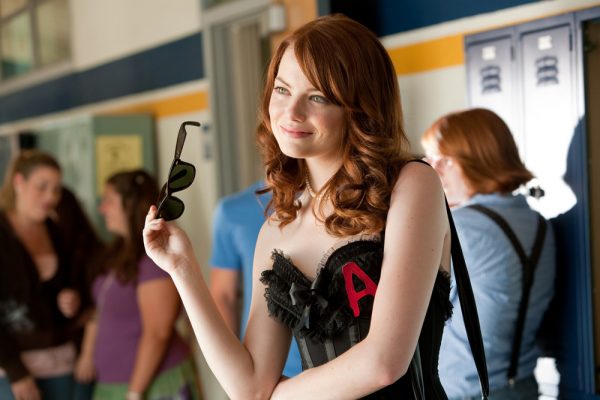 Emma Stone in Easy A

Lazy Friday News is a weekly round-up of stories from across the spectrum of entertainment, or whatever happens to tickle my funny bone. This week: the first demo from The Beatles has resurfaced after 50 years; Emma Stone may have a sex tape out there somewhere; Judd Apatow’s 22-year-old Simpsons script is finally being made; $299 could earn you a celebrity voicemail message; Chevy Chase is walking away from Community; and expect the next Riddick film to come with a hard-R rating.

BEATLES REJECTED DEMO FOR SALE: Fifty years ago, Decca records rejected a band that would go on to become one of the top-selling artists of all time, and this week the original audition reel has finally surfaced.

The band was, of course, The Beatles, and the reason they were rejected came down to the record company boss believing that “guitar groups are on the way out” back in 1962. Only a few months later, The Beatles would end up signing with EMI.

The unreleased demo of cover songs is set to go on auction in the coming months with an estimate of £30,000, but it’s safe to say the guy who let The Beatles walk away from a record deal should still be kicking himself, whether he’s alive or not.

For the Beatles fans, the Daily Mail article says that, “the ten tracks on the 12-inch audio tape include “Money (That’s What I Want)”, “Like Dreamers Do”, “Take Good Care Of My Baby”, “Three Cool Cats”, “Love Of The Loved”, “Memphis” and “Crying Waiting Hoping”.

EMMA STONE SEX TAPE? News has leaked that, according to Radar Online, actress Emma Stone may have a home made sex tape out there somewhere thanks to her previously wilder ways.

In the article, a source is quoted as saying, “Emma Stone has a sex tape and that’s a fact, she made it long before she started dating Andrew Garfield, and before she really became a household name. She was just young and probably thought nothing would ever come of it.”

Luckily for Stone, the tape has not been sold or released yet, thanks to the person she made the video with, but there is never any guarantee the tape won’t appear suddenly, if the price were right.

As the mysterious source said as well, Stone would likely be very upset if the video were released, and she “has no respect for women like Kim Kardashian and Paris Hilton who became famous because they released a sex tape.”

JUDD APATOW SIMPSONS SCRIPT: In another “blast from the past” this week, Judd Apatow has revealed to Conan O’Brien that a script he wrote for The Simpsons “exactly 22 years ago” is finally going to be turned into an episode.

“After only five Simpsons episodes aired, I sat down and tried to write one when I was in my early twenties. And what it was about was they went to see a hypnotism show and at the hypnotism show, they made Homer think he was the same age at Bart. And then the hypnotist had a heart attack. So now Homer and Bart became best friends and they spent the rest of the show running away because Homer didn’t want responsibility and didn’t want to be brought back to his real age. So I basically copied that for every movie I’ve made since.”

You can watch the whole interview over on Bleedingcool.com.

CELEBRITY VOICEMAIL FOR CHARITY: Want to have one of the coolest voicemail message on the planet? What if William Shatner, Tom Hanks or Will Ferrell recorded one for you?

For just $299, Autism Speaks is going to offer custom messages from stars, all in the name of charity. Only a limited number of the voicemail messages will be offered in between December 3 and December 9, so head over to www.soundoffforautismspeaks.com to register for a chance to be one of the lucky contributors.

My vote would of course be for Patrick Stewart. “Tea. Earl Grey. Hot. Make it so, and then leave a message at the beep.”

CHEVY CHASE DITCHING ‘COMMUNITY’: NBC has revealed this week that Community co-star Chevy Chase has left the show effective immediately. The early departure means that the actor won’t complete the fourth season of the series, which is set to return on February 7 (otherwise known to Community fans as October 19).

According to the New York Times, the split was a mutual decision with the producers of the series, and based on the reports from the past year, Chase had become frustrated with playing Pierce Hawthorne, a character that at the best of times could be called bigoted and crass. One comment from Chase also suggested that he found working on television beneath him.

Hopefully, as a fan of Community, Chase’s departure will somehow work out in the plot, but I can’t say I’ll miss him. If Community is looking for a replacement, my vote would be Patrick Stewart.

ROBOT FIGHTING COMING TO SYFY: If the film Real Steel left you wishing robot boxing was for real, it looks like SyFy is about to make your dreams a weird reality.

A new show from SyFy, called Robot Combat League, appropriately enough, has been greenlit and pits human-shaped robots against each other in a boxing ring. The eight-foot-tall robots will be controlled by people shadow-boxing within the arena–so if the human boxer throws a right hook, so does the robot counterpart.

Chris Jericho is set to host the show, which sounds like it was ripped wholesale from Real Steel. Read the full story, and take a look at the ridiculously impressive photos, over at EW.com.

BLOODY GOOD ‘RIDDICK’: Good news, Riddick fans. Vin Diesel has gotten his wish, it seems, as the new sequel to Pitch Black–simply titled Riddick–is going to arrive with a hard-R rating thanks to blood, nudity, and lots of swearing.

In an interview with Collider, co-star Katee Sackhoff said, “There’s a [$#@!-load of blood and there’s little pieces of nudity, here and there. There’s my nudity too, but it’s side boob, for three to five seconds. It’s not that big of a deal. It’s mostly for the language.”

“My character and Matt Nable’s character say f**k, like every other word,” she said. “It’s kind of fantastic, actually. He must have said f**k 15 times, in every single scene.”

Read Collider’s full interview with Sackhoff here, and stay tuned for the film some time in 2013.