‘Gears of War 2’ party takes to the underground 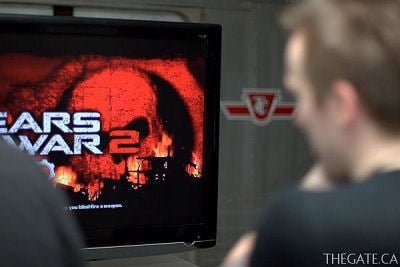 The game has only been on sale for a couple of hours, and it is already bound to be one of the biggest games of the season, if not the entire year.

Following one of the best-reviewed, and best-selling games for the Xbox 360, Microsoft’s Epic Games studio released Gears of War 2 at midnight today. The third-person shooter pits gamers against a rising tide of enemies known as the Locust, horrible creatures that are living beneath the ground and destroying humanity’s cities on a planet called Sera. Since Emergence Day, when the Locust Horde first appeared, humanity seems to be fighting a losing battle, and the latest game ups the stakes with bigger weapons, and a lot more enemies.

Much like the Halo series, fans are excited to find out what happens in the story mode for Gears of War 2, but also look forward to hours and hours of online battles against friends and others gamers from around the world.

Giving fans a special preview, Microsoft held a launch party in Toronto at the abandoned Lower Bay subway station, bringing in guests and members of the media to play the new game.

During the event The GATE was there to sample the soon-to-be hit and talk to Epic’s Senior Gameplay Designer, Lee Perry, who told us a bit about making Gears of War 2.

Watch the video below and stay tuned for the game review: