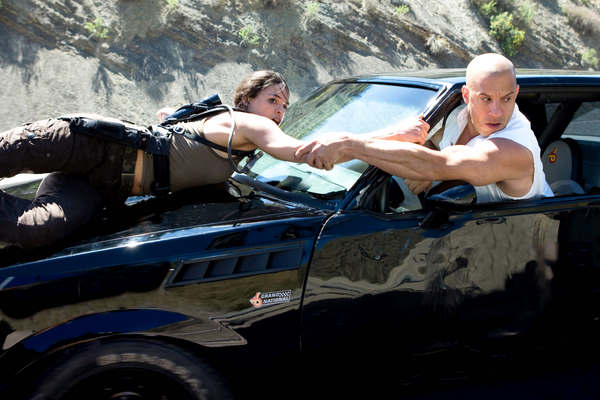 Vin Diesel returns to the cars and the deadly races this week with the release of Fast & Furious on DVD and Blu-ray. Also arriving this week in stores, there is the lamentably bad teen comedy, Miss March, plus TV’s hit sci-fi drama, Battlestar Galactica, the complete series.

Stepping back into the fold of this action franchise, Diesel stars once more as ex-con Dominic Toretto, with original co-star Paul Walker as agent Brian O’Conner. This time out though, the duo are forced into a pact to work together in a move to take out a shared enemy. Of course, that means getting behind the wheel yet again in a series of races to test the special effects gurus and stunt pros who make this series possible.

Calling this a sequel might be a little misleading though. The truth is, if we open up our dictionaries, Fast & Furious is actually what you would call an “interquel,” set in between the second and third films. That is of course a rather meaningless fact that only clarifies how convoluted the series has gotten to pump out yet another film.

Directed by Justin Lin, the filmmaker responsible for making the poorly-rated, box office hit, Tokyo Drift, it seemed impossible to hope for much more than the usual this time out. Sure, the stunts are pretty huge, the visuals and effects are sometimes brilliant, but with a lame story and no common sense, does that matter? Often, it doesn’t.

To be honest, a film like Fast & Furious is almost too easy to bash, with some of the most impossibly stupid stunts ever imagined. It’s also hard to forgive that, more often than not, the film looks like a poorly realized video game, complete with some less than stunning effects in a number of key scenes.

The film has chutzpah though, and Walker works well with Diesel’s deadpan style since he actually brings some facial expressions to the mix. I just can’t really recommend it to serious action junkies based on the lack of even the most simple of plots.

Included in the DVD package are two features, a commentary track with Lin, who gives some fairly interesting technical information about making the film, plus a decent gag reel that is mostly amusing, but never hilarious.

Miss March
Try not to be too shocked, but there’s another teen comedy coming out on DVD this week, and it involves a road trip, and a guy chasing after a pretty girl. It’s also kind of dreadful.

In this case the setup is, admittedly, kind of clever. Zach Cregger plays a abstinence-preaching high school grad who, on the night he’s supposed to jump in bed with his high-school sweetheart, gets knocked out and ends up in a coma. Waking up four years later, our young hero discovers that his girlfriend has moved on to become… a Playboy bunny and is said to be sleeping her way across America. With the help of his best friend, he’ll head off to the Playboy mansion and try to make up for their lost night together.

Not surprisingly, the film is exactly what you might expect from the average teen comedy: a complete waste of time. It’s also hardly the best example of the genre. Truth is, there are lots of funny, and fairly well done teen comedies out there, and this is just not one of them. It’s the dollar store equivalent of this brand of comedy, and it feels like someone hobbled it together based on what they heard was funny to someone else.

I rarely issue this kind of warning, but please, just avoid this one at all costs.

Also on DVD and Blu-ray…

While I have to readily admit that I haven’t watched more than a couple of hours of the series, these two new packages are phenomenal collections, with loads of extras. The only flaw with the fourth season would have to be that the season was split in two, but this was a tactic employed by Universal when they released the second season as well.