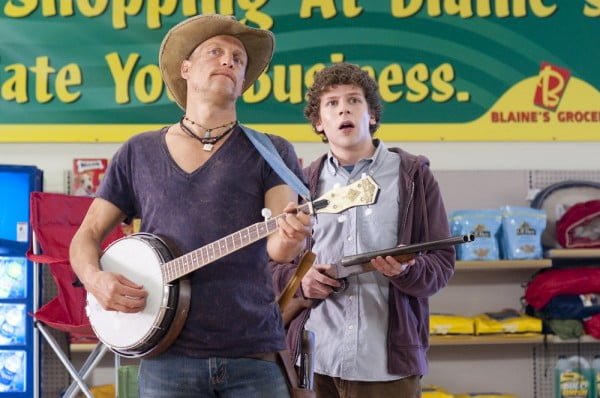 Woody Harrelson and Jesse Eisenberg in a scene from Zombieland

New arrivals on DVD and Blu-ray for February 2 include the horror comedy Zombieland, starring Woody Harrelson and Jesse Eisenberg; the drama, Amelia, with Hilary Swank and Richard Gere; plus the romantic drama Love Happens.

Zombieland was quite simply the feel good zombie movie of 2009, and now for 2010 it is definitely the first must-own DVD and Blu-ray releases.

Setting itself apart from you average zombie movie, director Ruben Fleischer’s Zombieland is a fun, fresh, laugh-out-loud trip across a devastated America where the new national pastime is killing zombies. Somewhat in the vein of Shaun of the Dead, the film is a tongue-in-cheek romp that comes through with lots of laughs, and more than a little heart.

The oddest part is that, for a zombie movie, the film is incredibly high spirited. There is a constant sense of doom around the corner, but that is eclipsed by the barrage of sight gags and jokes delivered by this clever group of actors, and the brilliant script that’s stuffed with witty dialogue and bloody good humour.

Extras included on the DVD package range from the excellent commentary track, featuring Harrelson, Eisenberg, Fleischer, and writers Rhett Reese and Paul Wernick, to a few making-of featurettes. There are also deleted scenes, and a featurette on making the visual effects for a couple of the key scenes.

The film, which I would clearly call Oscar fodder, failed to inspire anyone while it was in theatres, and deserves no more recognition on DVD either. Critics have soundly lambasted the film for not only being clumsy, but also poorly acted, and trite.

“Amelia leaves you wondering how its abundantly gifted director, Mira Nair, and its Oscar-winning star, Hilary Swank, could have been complicit in such clumsiness,” Joe Morgenstern wrote for the Wall Street Journal.

While Peter Howell of the Toronto Star wrote, “Courting Oscar with unseemly lust, while also promoting Earhart as an early feminist, the film strives too hard to be profound and not enough to be merely human.”

Lastly this week, Aaron Eckhart and Jennifer Aniston star in a romantic drama about two somewhat broken people who can’t keep their eyes off each other.

Looking across the board at the major critics, Love Happens is one of the worst reviewed films from the past few weeks, not to mention when it came out in theatres. The only film with worse reviews recently was Whiteout.

Robert Abele from the Los Angeles Times called it a “superficial romance” suffering from “clichéd insipidity” that he called “irksome.” While Brian Lowry wrote for Variety, “Excise the love story, and there’s a pretty good movie buried within Love Happens struggling to get out, mostly to little avail.”