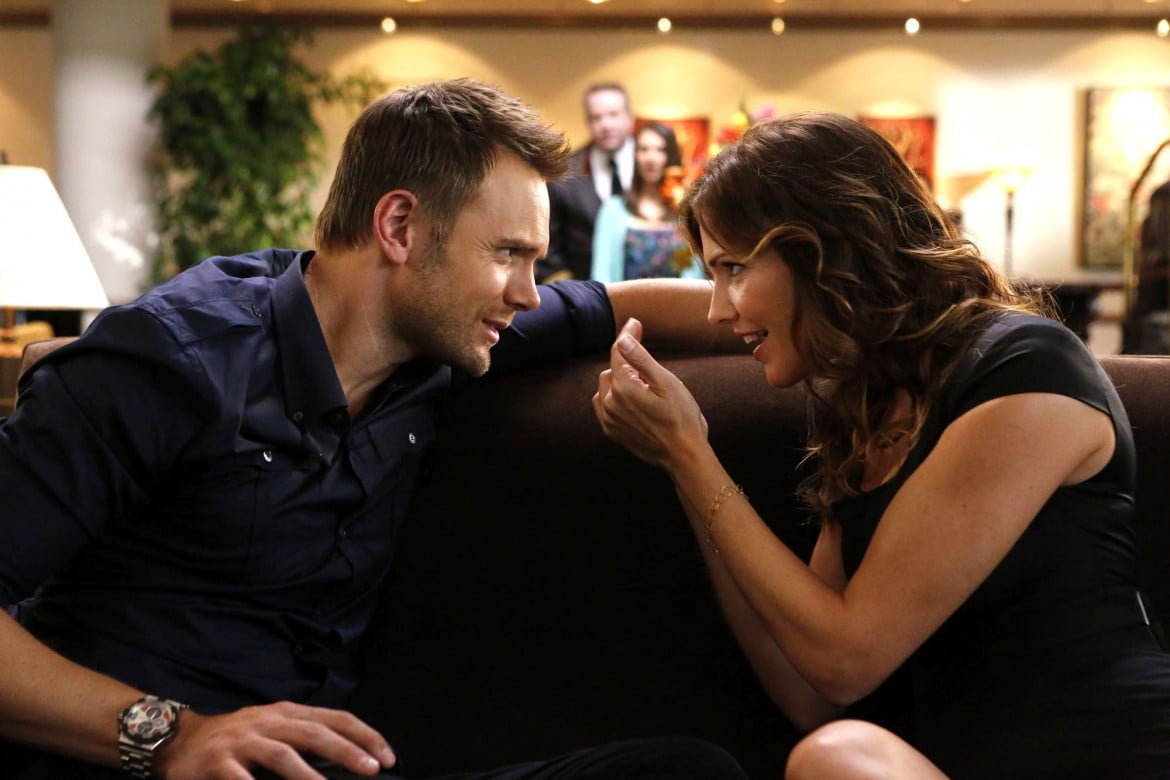 Tricia Helfer knows what it can be like having obsessed fans–she was the star of Battlestar Galactica, after all–so it seems only appropriate that in tonight’s episode of Community, she should get to play the other side of the table.

Airing tonight on City at 8:00 PM, the episode, “Conventions of Time and Space”, revolves around an Inspector Spacetime convention where Helfer plays the part of Lauren, a Spacetime fan who mistakes Jeff (Joel McHale), for one of the show’s hunky villains.

Chatting with Helfer this week, she spoke about the role and some of the other work she’s doing over the coming weeks. Here’s what the Canadian actress had to say about Community, StarCraft II: Heart of the Swarm, and her upcoming pilot for the American remake of the television series Killer Women.

W. Andrew Powell: You’re actually playing a super fan in this episode, can you tell us a bit about the character?

Tricia Helfer: “It’s a very small role, but a fun role, and it’s a cute tie-in with the Inspector Spacetime convention, and my history in that genre. I play Lauren, and off the start, the audience wouldn’t suspect, and Joel as Jeff Winger does not suspect that she’s a super fan, so she kind of starts chatting up Jeff thinking that he’s a character from Inspector Spacetime–that he’s the actor that plays this character–and she starts to lose her cool and starts to show her true colours as a super fan, but not necessarily a fun super fan, more like a psychotic super fan.”

Andrew: Obviously you must have had some experience with super fans based on your career, so was there anything you took from those experiences to play this part?

Tricia: “Yes and no. I’ve been pretty lucky, and I think sci-fi conventions get a bad rap from people that don’t attend them. I think most of the time [the fans]–they’re not what we expect them to be, but there have been a couple of instances where there’ve been some people who get just a little bit too excited that you’re there. Most of the time people are incredibly nice and pleasant.”

“It’s not the ones that are dressed up and all, ‘here I am, I’m here to have fun!’ It’s the ones more like a Lauren that you wouldn’t necessarily expect, and then all of a sudden they turn on you. So, I have had one or two instances where, you know, somebody is all of a sudden–they just can’t speak because they’re just so excited.”

“One guy I remember, at one convention, he just decided that I was just kind of property, that he could just… kiss me [laughs]. I can certainly draw from a few things.”

Andrew: You’ve done so many different things, from voiceovers in games and cartoons to science fiction and comedy–do you have a favorite among all these parts and roles?

“I think it would get limiting if you just played one type of thing all the time, and I think after Battlestar, that’s why I did try to branch out. Not that I was trying to stay away from the genre at all–I definitely stayed in the genre with video games and the voice jobs I do–but it was just to try and branch out since Battlestar was my first show; I had just started acting when I got it, and to have that variety and more character actor type aspects to my career.”

Andrew: What else is coming next for you?

“Talking about voice acting, I have StarCraft II: Heart of the Swarm coming out on March 12, which I’m really excited about. It’s a huge arc for my character, Sarah Kerrigan, ‘Queen of Blades,’ so I hope that’s received well. I had a lot of sessions for it, and for the games I’ve done, it’s sort of the biggest character plot and arc that I’ve had.”

Andrew: That’s great. Can you tell me a bit about the pilot?

“Well, it’s based off of a hit Argentinian show [Mujeres Asesinas], and they’re bringing it over here. Ben Silverman, Sofia Vergara, and Hannah Shakespeare wrote it and are producing.”

“It’s definitely more character driven than procedurals, and I play Molly, and she’s obviously a bad-ass Texas Ranger, but she also has a quirky side and also a damaged side, so this is definitely a multi-layered character to play, which I’m looking forward to.”

“The Argentinian series is specifically about women who kill, and there’s a different–maybe not every single time–but the majority of the circumstances are for a different reason than men who kill. It’s usually for a specific reason–a crime of passion or something like that, and I think it will have a unique take and an interesting aspect to it.”

Season four of Community airs Thursdays at 8:00 PM on City. StarCraft II: Heart of the Swarm arrives on March 12.