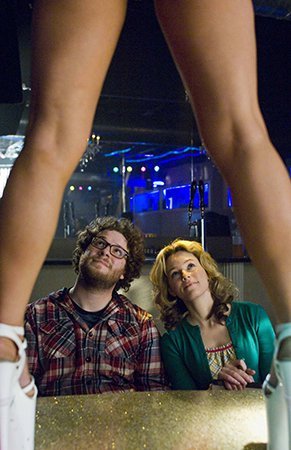 If I go through some of my all-time favorite songs, most of them have one thing in common: they’re featured in a movie I also love.

Shaun of the Dead reminded me how much I loved Queen with the song “Don’t Stop Me Now.” Damien Rice’s “The Blower’s Daughter” leaps off the screen in Closer. Counting Crows had the wickedly addictive opening song “Accidentally in Love” in Shrek 2. Donnie Darko blew me away with the classic Echo & the Bunnymen song “The Killing Moon.” And those are just a few songs that jump to mind.

It just amazes me how a song can have such an important part in a movie, perhaps most dramatically represented by Gary Jules’ emotionally charged remake of “Mad World,” also from Donnie Darko.

One single song reminded me how important it is to have great music in a film, and how often it’s the unknown songs that have the greatest effect.

I don’t want to ruin the film for anyone, but during an emotional scene between Zack and Miri, who are played by Seth Rogen and Elizabeth Banks, the band Live has a song that fits so perfectly, it actually made my jaw drop.

With frontman Ed Kowalczyk‘s intense vocals, layered on top of the band’s heavy guitar rhythms, the scene is about as perfect as it could be.

Looking through the press notes I found out that the song was called “Hold Me Up,” but as a devout Live fan I can definitely say I’ve never heard the song before.

Thankfully, director Kevin Smith was able to give a little insight into the song. Here’s what he had to say:

It’s an old song that I first heard in ’95, when we were putting together the Mallrats soundtrack. It was actually in the film for the first test screening, but Live decided they wanted to hold onto it as a potential single off their next album (which would follow Throwing Copper). When I was editing Jay and Silent Bob Strike Back, the song had still never surfaced or been released, so I put in a request for it again. Again, I was denied.

Third time, apparently, was the charm. Needed a song for that sequence in Zack and Miri and remembered the Live track. This time, the band signed off on us using the track. Took 13 years, but was worth the wait.

I’m still a big fan of Live, but I have to admit, there’s an intensity to the song that doesn’t seem to exist in any of the band’s recent material. Hearing it in the film, I had a good idea it was from their Throwing Copper days, but now we just have to wait and see if the studio can get the rights to use the song on the soundtrack too. If the band is smart though, they’ll consent and promote the hell out of this song – it’s one of the most memorable scenes I’ve seen all week at TIFF, and I give nearly half of that credit to the song.