TIFF Bits: On the spot with Kristin Booth 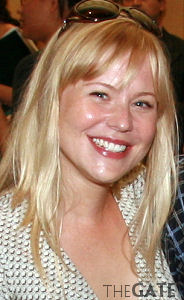 Earlier this week the Toronto International Film Festival held their annual press conference to announce this year’s lineup of Canadian films. Among the titles announced, eight feature-length films will make their debut for the Canada First! showcase, including Martin Gero‘s comedy, Young People F*cking, and Ed Gass-Donnelly‘s This Beautiful City.

Appearing in both of those selections is one of The GATE’s favorite Canadian actresses, the talented Kristin Booth. Kristin has appeared in numerous TV shows, and co-starred with Ryan Reynolds in the film Foolproof. Here’s what she had to say about the two films coming out at this year’s festival.

Andrew: How did you get involved in these two projects?
Kristin: “Well, both films I auditioned and was lucky enough and blessed enough to get the roles. Young People F*cking is a great, fabulous adult comedy about sex obviously, and I play Abby, and she’s really fabulous and adventurous in the bedroom. Or at least wants to be.”

“This Beautiful City, which I also just auditioned for, is much darker and I play a bipolar, crack-addicted prostitute. Yes, so it’s quite a departure from who I am as a person and it was really challenging. It will be really exciting to see how it turns out; I haven’t actually seen the film yet.”

Andrew: When did you find out you were in two films at the festival?
Kristin: “I just found out last week, so that was exciting.”

Andrew: So how do you feel?
Kristin: “I feel really lucky. I’m really proud and really happy to be a part of both films. I love the people involved in both and to see them get the accolades they deserve is really great and I’m sort of just along for the ride.”

Andrew: What did it take to find those characters and get into the roles?
Kristin: “For This Beautiful City it was probably the most challenging role I’ve ever taken on and I’m really praying that it will be the most challenging role I ever take on because it was really difficult and had a long-lasting effect. We did a lot of research, we did a lot of improvisation in character, out in the real world, in the area that we were shooting in. So it was really a metamorphosis, that character.”

“And then Young People F*cking was a nice break from that and it came really quickly on the end of This Beautiful City, so it was really good for me to get back into a character that’s a little bit more attainable without having to really delve into those dark, dark places.”

Canada First!
YOUNG PEOPLE F*CKING is a smart and fast-paced comedy which intertwines the stories of five twenty-something prototypical couples over the course of one evening. As the night proceeds, they discover that casual sex is far more complicated than they imagine. The film showcases some of Canada’s brightest young talent and stars Diora Baird, Carly Pope, Callum Blue, Sonja Bennett, Kristin Booth, Josh Cooke, Josh Dean and Peter Oldring.

THIS BEAUTIFUL CITY, adapted from the director’s own play Descent, cataclysmically weaves through five lives that connect when a woman plummets from her balcony in Parkdale. Starring Kristin Booth, Caroline Cave, Noam Jenkins, Stuart Hughes and Aaron Poole. Director Ed Gass-Donnelly was a Talent Lab participant in 2005.

The 2007 Toronto International Film Festival runs from September 6 to 15. You can find more information over at the official website at www.tiff07.ca, and keep checking in with The GATE for more festival news.