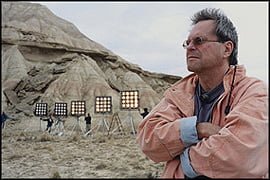 There is a mythological character by the name of Sisyphus whose gig was to be condemned throughout eternity to role a giant rock up the side of a mountain only to have it role back down to the ground just as he was about to reach the summit causing Sisyphus to begin the process all over again.

Mention that to filmmaker Terry Gilliam and he’ll nod in familiarity as it sounds a lot like the way his career has gone over the last twenty odd years.

Gilliam, a true eccentric and original, began his career as a gifted animator in England where he fell in with the troupe known as Monty Python’s Flying Circus and became known at the “American Python”. Since leaving Python he has been one of the most original filmmaker’s out there, making films as diverse as Brazil, The Fisher King, 12 Monkeys, Fear and Loathing in Las Vegas and is currently finishing up another of visionary treats, a film called The Brothers Grimm.

But for every film he has made, there has been at least one that has collapsed on him and not been made, and for every movie he has made he seems to have had to fight bigger and bigger battles before they were realized.

When I spoke with Terry Gilliam he was wearing comfortable khaki pants and a wildly colorful flowered shirt. He laughs loud and easy and talks about his battles with an equal measure of pride and weariness.

Christopher Heard: Are your films made better, given more character, by the struggles you have to endure almost every time out?

Terry Gilliam: [Laughs] Are you nuts? I would much prefer everything to go smoothly and have to encounter no resistance whatsoever…

TG: No, no I know what you mean, and it is a nice way of saying, can anything good be found in all the battles I have to fight, but you know, really, I don’t want to make the kind of movies that are formulaic and easy and assembly line kind of films. After Python when I did Time Bandits there was enough Python in that film that it could be sort of lumped in with the other stuff I had been doing. But with films like Brazil, like Don Quixote [The never completed film The Man Who Killed Don Quixote with Johnny Depp, the un-making of which was the subject of the first rate documentary Lost in La Mancha] I am working from a vision that is very singular and thus very hard to describe and pitch. And that is one of the vagaries of the film business, there are just so many things that have to go right before a film gets made, it is a miracle than any film gets made given the mine field you have to trudge through on a daily basis.

CH: And then after you have navigated the minefields you have to fight to get the film released, as in Brazil…

TG: Brazil was one of the legendary things… it ended up being a cautionary tale for filmmakers about dealing with big corporate entities. That was such an awful experience because I made the film I wanted to make, I made the film that I told Universal I was going to make. It was well received by all who saw it, but because it didn’t fit in with the studios image of a mainstream commercial movie is they didn’t get behind it, and that drove me fucking insane because it could have been a bigger hit if they had just done their part and gotten behind it.

CH: And there is no real learning from that, is there?

TG: Not at all, unless you learn to just give up and make comedies with Sandra Bullock for the rest of your career.

CH: Your experiences on Fear and Loathing In Las Vegas, you came in after another director had been developing the project and you made it your way but then were raked over the coals over the screenplay credit, something you fought hard for…

TG: Well that whole situation was just bizarre. My writing partner Tony Grisoni and I took the book by Hunter Thompson and adapted it without ever having read a page of the previous drafts of the screenplay. Then the previous writer/director [Alex Cox] sued for writing credit claiming that our script was similar to his – well of fucking course it was similar! It was based on the same fucking book, a book that is sparsely and directly written, we used the meat of the book in our screenplay, as I am sure he did, but the idea that we somehow copped his screenplay is patently absurd.

CH: I love the fact that you published the screenplay you wrote with Tony Grisoni…

TG: [Laughs] Yeah, we called it NOT The Screenplay Fear and Loathing in Las Vegas, “NOT written by Tony Grisoni and Terry Gilliam.” [Laughs]

CH: What ever happened to your adaptation of the comic book “The Watchmen”?

TG: Again, I was just coming off the nightmarish making of The Adventures of Baron Munchausen, which went way over budget and flopped badly. I wanted to get into my next project quickly and the idea of doing this big adventure action movie about a bunch of fading superheroes was something that interested me very much. There was a script going around by Sam Hamm, the guy who wrote Batman, and it was a good script, but it wasn’t my idea of what I wanted the film to be.

I wrote a script and then Joel Silver [Action film producer of everything from Lethal Weapon through the Matrix trilogy] came on board and said he would make the film with me because he was such a fan of Brazil. He was just coming of Die Hard 2, which also had a huge over-budget problem. He told me he had the $40 million we needed to make the movie but when it came down to actually making the movie it turned out he had only about $20 million and that was just not nearly enough and I didn’t want to get involved in another project that seemed destined for big money problems right from the start.

CH: When you have something like that, something you worked on, thought about, cared about, just fall apart, do you put it right out of your consciousness or do you keep it alive somehow with the hopes of getting it done some day?

TG: Well, that’s an interesting question, in the case of Watchmen I probably won’t ever get back to it because I have different things on my mind and different things I want to make, but in the case of The Man Who Killed Don Quixote, now that Johnny [Depp] is a big star again, we might just be able to slap that back together based on his newfound bankability.

CH: When you look back on your time as a member of Monty Python’s Flying Circus, do you do so fondly?

TG: Of course, yes, nothing else I’ve done would have been possible without that, we did some great stuff together.

CH: When you guys stopped working together, was there the sense that it was the right time to stop or did you or some of you feel that you had some more good stuff in you that went unrealized?

TG: Well, that is kind of hard to say really – the Pythons were a large group of diversely talented guys, it isn’t like working with one other person, after awhile we all found that we had opportunities to do some stuff on our own that we had always wanted to do, so we just ended up too busy as individuals to stay working together exclusively. And I think that the Python stuff remains so popular because there is what there is and it was never allowed to get old and tired.

CH: One last thing, my favorite of the Python movies is The Life of Brian…

CH: Which you guys wrote in my favorite spot in the world…

CH: Why did you choose to write it there?