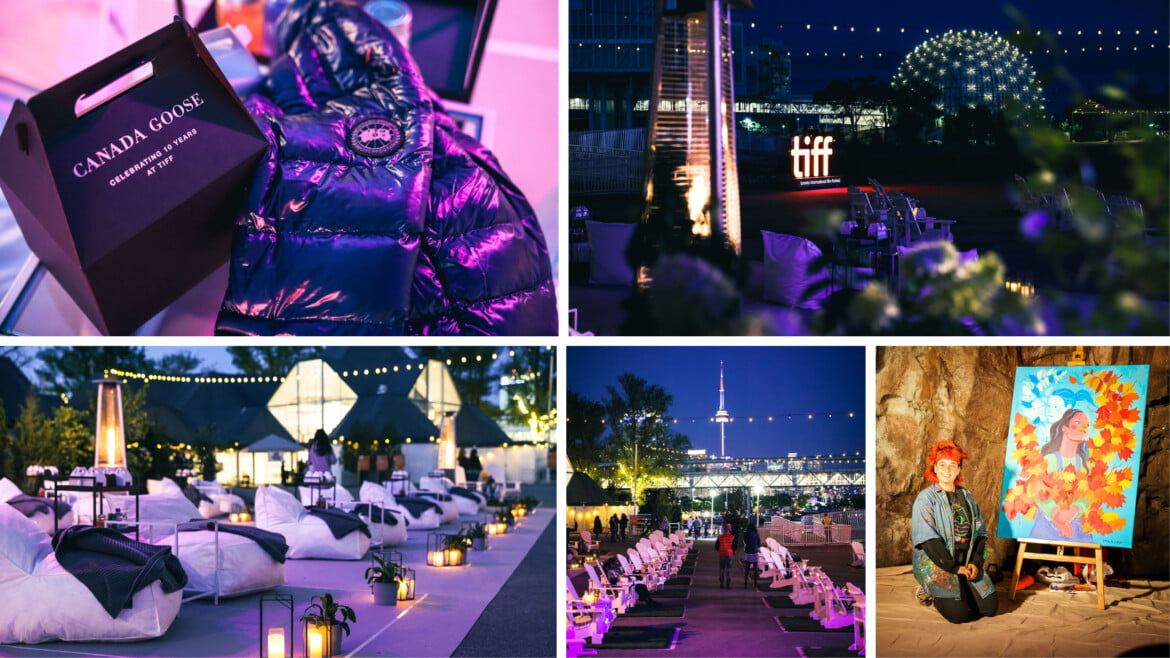 The Toronto International Film Festival is my favourite event of the year. From the cinematic experiences, to the way the city becomes a meeting place for film makers and film lovers, TIFF always amazes me, and Canada Goose’s Out There Cinema was one of this year’s biggest highlights.

Canada Goose has been supporting TIFF for a decade, and at this year’s festival they hosted a special screening of director Céline Sciamma’s remarkable Petite Maman at an unforgettable outdoor screening in Ontario Place’s West Island Open-Air Cinema.

Decked out with lights, cozy chairs, warm blankets, and snacks and treats, the company rolled out the red carpet, and gave their guests for the evening jackets to keep us warm.

Set mostly outdoors, Petite Maman was the perfect film for the venue, following one young girl’s connection to her mother through the past. It’s a beautiful, sweet, comforting story that’s one of the best film’s I’ve ever seen at TIFF, and I loved the two stars, Joséphine Sanz and Gabrielle Sanz.

Enjoying some snacks, drinks, and hospitality, I have to say it’s one of the best nights I’ve had at TIFF in years. The food was delicious, the team was incredibly welcoming, and I love my new Men’s Crofton Jacket. It’s light, warm, and it packs away easily–thanks to a pocket inside the jacket you can fold it into itself–for travel or storage.

Since TIFF is a bit like the last hurrah of summer, this also felt like the perfect way to dive into fall, with a night out in a beautiful outdoor venue, and a cozy jacket that I’ll be wearing all season.

TIFF had a lot going on at the outdoor cinema before the film started, including artist Kayla Buium (AKA milkboxtheartist) working with StreetARToronto to live paint a picture to represent the film.

For this year’s film festival, Canada Goose also worked with the Variety Studio as the presenting partner to help welcome guests, and give them space to unwind.

Hosted at the St. Regis Hotel, the lounge ran for three days, and welcomed some of the biggest stars at the festival, including Jessica Chastain, Riz Ahmed, Ben Platt, Octavia Spencer, Dionne Warwick, and Benedict Cumberbatch, to name a few.

Saturday I even dropped by the Variety Lounge, and had the chance to see the space, hang out a little, and then stay for the arrival of Dune director Denis Villeneuve, and star Rebecca Ferguson. Villeneuve seems like such a down-to-Earth gentleman, and he was totally relaxed. Ferguson had the most incredible outfit, and was full of energy.

Check out a few photos from Canada Goose’s Out There Cinema below, a short video, and highlights from the Variety Studio at TIFF. It’s been a great festival, and I’ve really enjoyed having the chance to get out again to some events and in-person screenings. Thanks to Canada Goose once again for the hospitality.