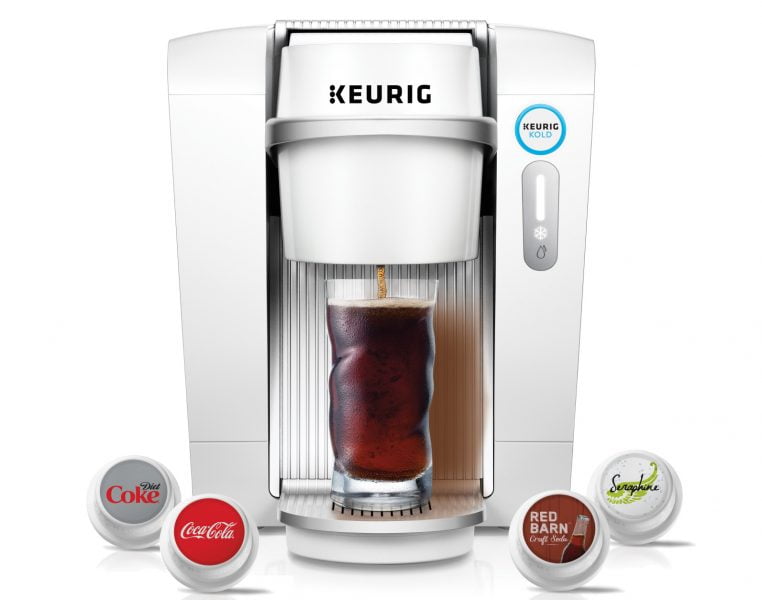 Keurig gets a gold star for the concept behind their Keurig Kold drinkmaker system. Soft drinks from a can are fine, but there’s nothing quite like fresh, cold, draft pop. Keurig’s problem is that the Keurig Kold fails on more levels than it succeeds. It’s big, slow, and expensive, but it does produce a very nice glass of fresh pop.

When it arrived, I got a quick sense of the problem with the Kold before I even opened it. The box was way bigger than I ever expected, and it’s not just packaging. The Keurig takes up a massive amount of counter space–it’s nearly 20 inches deep, 12 inches across, and over 17 inches tall (for comparison, the Keurig 2.0 K300 is 10 inches by 13 inches by 13 inches). That means the Kold won’t fit in a lot of condo-sized kitchens without some work, particularly because it’s so deep, which is my first big complaint with the machine.

They also suggest a two-inch gap between the back of the Kold and the wall.

Starting up the Kold was simple, but then comes the next problem that I had with the Kold. You can’t just turn the machine on when you want to use it. The machine needs two hours to cool down before it can be used, and then it’s always on, kind of like a fridge. The only way to turn it off is to unplug the Kold, and then when you want to use it again it needs to cool down for another two hours.

That’s the next problem with the Keurig Kold. Two minutes is a long time when you’re waiting for pop to appear. Opening a can of soda takes about 15 seconds, and that includes getting the can out of the fridge and grabbing a glass. Pouring fountain pop takes about 30 seconds if you include grabbing a cup and ice.

We’re just talking about seconds here, but when you want to dispense three or four glasses of pop, it’s a long wait. If you’re hosting a party, is that fifth person really willing to wait ten minutes for a pop? What about the seventh person who won’t even get a cold drink since the Keurig Kold can only chill six glasses of drinks at a go? For that person, the instructions recommend adding ice water to the machine, which is an easy step, but then why even have a machine to chill the drinks in the first place? If you need to put ice into the glass, why not just pour a can of pop in the first place?

For families, the Keurig Kold is a great novelty, and offers a pretty great selection of drink options, which is the best thing that can be said for the machine. From Coke products to Canada Dry, and a few Keurig-branded drink pods as well, the Kold makes a good glass of pop that tastes nearly exactly like you would expect. Kids will certainly get a kick out of making their own pop on-demand, but the novelty is bound to wear off, especially when parents start looking at pods and prices.

A four-pack of Coke pods is $5.99, while flavoured seltzer pods will run you $5.49. In the case of Coke and most of the other pods, that works out to around $1.50 per glass, and keep in mind that a glass of pop is smaller than a can. By contrast, a can of pop is about 50 cents if you buy a twelve-pack at most stores. For a machine that already costs $399, always needs to be plugged in, and takes up a lot of shelf space, that’s pretty steep for a glass of pop. While I can understand that it might be pricey to licence Coke’s beverages for the machine, pricing them in the range of a 1-litre bottle of pop simply seems like bad business, and it will make most customers wary from the start, as it should.

On top of that, for a machine that runs all the time, I can’t confirm how much electricity it might use. If you only end up making pop at night, it seems like a huge waste to run it day and night though.

My experience was also hampered by a problem that left the machine running loud non-stop. While some suggestions said that the cooling noise was like a small bar fridge, I would disagree. My machine sounded like and old bar fridge, and in a condo, that’s pretty noisy. We actually found ourselves turning up the television over it at times. While I believe this was an isolated experience, I’m not sure it’s acceptable even for two hours of cool down at the start.

Then there’s one last thing I can’t help but feel a bit peeved about. If you don’t put a pod into the Kold, and you turn it on, all you get is cold water. Don’t expect for it to be able to make carbonated water or anything–it’s strictly a cooling system, and the pod delivers all of the carbonation, so without those expensive pods, the machine just cools water. At least with a coffee pod system I can get water out that’s hot enough to make tea. My tap produces water as cold as the Kold, so why spend $399 for that? The Kold is just too dedicated a machine, and Keurig seems to have made sure it’s only going to work with their pods, at least for now. The only upside is that Keurig made sure you don’t need to buy anything else to run the Kold, like a CO2 tank.

As a matter of perspective though, the alternative system to the Keurig Kold is the SodaStream, which is about as different as night and day. SodaStream requires tanks of CO2 to produce pop or seltzer, but with just the machine and the tanks you can make yourself seltzer water without anything else, and the tanks are cheap and last quite a while. You have to cool the bottles in your own fridge, but that hardly seems like an issue, and if you have a few of the bottles, you can make a few different types of drinks. The issue I had with that system was that the syrups that you could buy from SodaStream were made with sweeteners instead of regular sugar–Sucralose and/or Acesulfame Potassium–and I can’t stand the taste of either. The sweeteners taste completely fake. You can buy soda syrups at some stores though, and the system itself is cheap by comparison at about $100.

So, while I might applaud the Keurig Kold for being an ingenious concept, the actual machine is difficult to endorse. Perhaps for cottage owners it might be a fun addition this summer, but the costs are hard to justify.