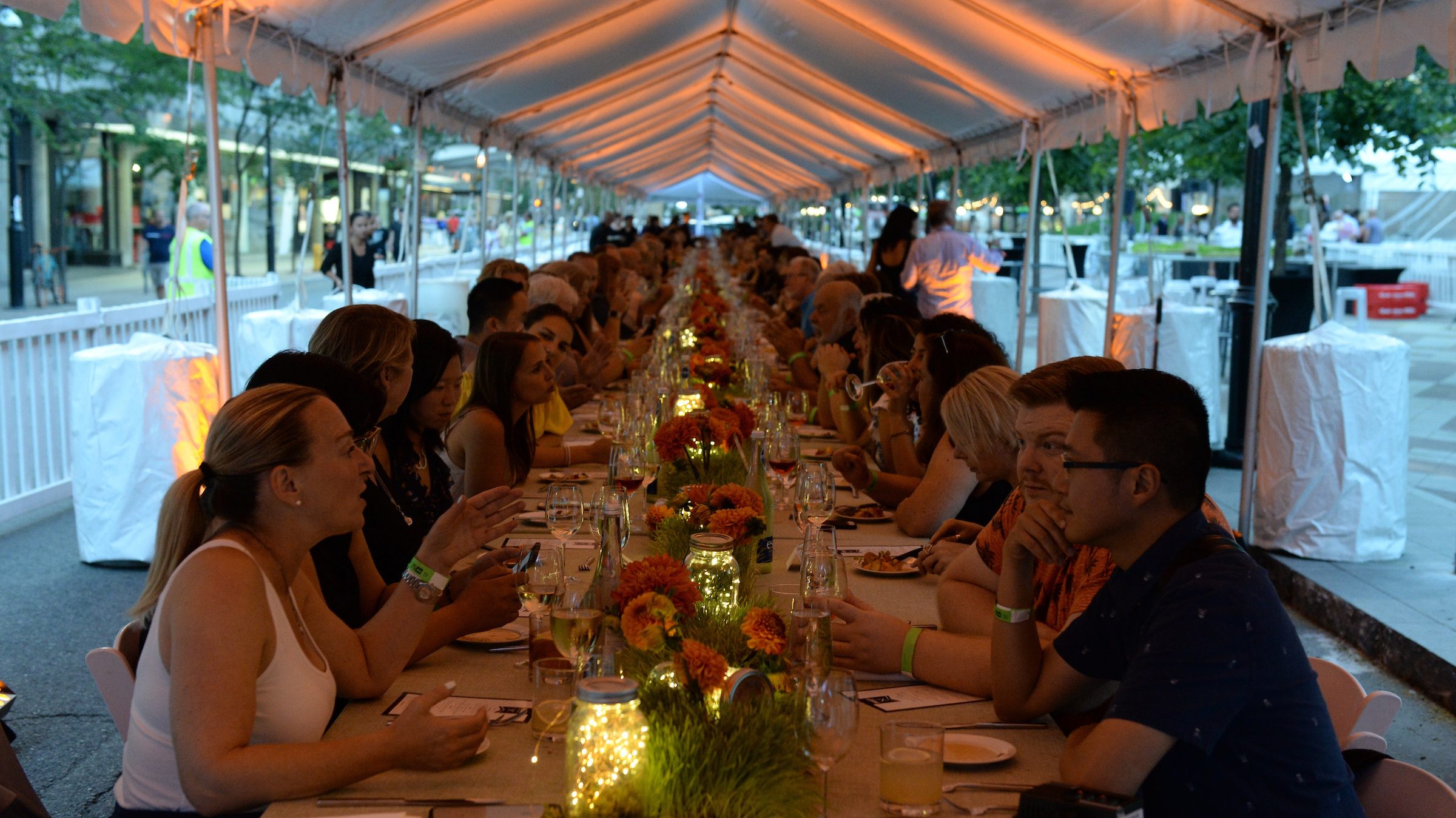 Dinner Under The Stars at the Feast of St. Lawrence | Celebrate food and fine dining for a great cause

On August 9, the Feast of St. Lawrence promises an incredible celebration of the St. Lawrence neighbourhood, and rich and delicious history, with al fresco fine dining and Dinner Under the Stars right on Front Street East.

Best of all, the event supports Second Harvest charity, while offering an amazing night out.

Tickets are available now at feastofstlawrence.ca/tickets/.

Showcasing the work of chefs and amazing restaurants from around the neighbourhood, the event is all about healthy eating and farm fresh produce, while also highlighting Ontario food, wines, and eating local.

Starting at 6:00 PM on August 9, the Feast of St. Lawrence opens at 27 Front Street East in Toronto with a reception that includes an oyster bar, charcuterie station, and hors d’oeuvres, with wine, beer and a whisky bar.

Then, Dinner Under The Stars begins at 7:00 PM and runs until 11:00 PM with two hundred and fifty guests seated at two continuous tables on Front Street East. They will be served a sumptuous 6-course dinner prepared by chefs from some of the top restaurants in the St. Lawrence Neighbourhood.

Wine pairing will be served by the Somewhereness group with each course, and CC Lounge will present a special whisky bar and beer courtesy of Creemore Springs Brewery.

Entertainment will include the 18-piece JAZZ.FM91 Youth Big Band in the beautifully illuminated Berczy Park, as well as Steven Jones the Illusionist from Museum of Illusions.

The Feast of St. Lawrence is presented by the St. Lawrence Market Neighbourhood BIA, and sponsored by Audi Downtown Toronto .

To join in the culinary celebration, head to feastofstlawrence.ca/tickets/ to buy your tickets now.

For more about the charity, the restaurants, and the chefs, scroll down.

Second Harvest was founded in 1985 and since then they have become the largest food rescue organization in Canada, and they’re now a global thought leader on food recovery. The organization works across the supply chain, from farmer to retail, to save surplus food before it ends up in landfill.

Every year, Second Harvest recovers over 12 million pounds of nutritious, unsold food–focusing on protein, dairy and produce–before it becomes waste, and distributes that to a broad network of 373 social service organizations.

Supported by hundreds of corporations, foundations, and the community at large, the organization rescues and deliver enough food to provide over 34,000 meals a day in Canada.

About the Restaurants & Chefs

Batch was born from the little town of Creemore, and from their love of European-style brewing, and an enthusiastic commitment to local food brought good food, cold beer, and friendly people together under one roof in the heart of the city.

Serving Batch and Creemore brews from their well-stocked beer fridge, the restaurant serves up-scale bar food with a focus on locally-sourced ingredients.

Mercatto Hospitality is a family of restaurant concepts with locations around downtown Toronto, with a focus on memorable experiences sharing food and wine from an Italian perspective.

Cantina Mercatto reinvents the underground wine cellar with its wine refrigerators and was inspired by sprawling vineyards and coastal Italian resorts. The restaurant’s menu is focused on the evolution of both the traditional and familiar, with creative pairing of libations, classic cocktails, and a curated mix of flowing wines.

Cafe Nicole & Lounge Bar is Novotel Toronto’s signature restaurant with a generous menu refreshed in line with the seasons in our comfortable stylish setting. Visit the restaurant and relax in a sophisticated, modern setting while enjoying a modern menu based in tradition, inspired by local recipes and infused by the flavours of Toronto.

Chef Jordan Gravelle started his culinary journey at the age of 15 working as an apprentice in a well-known 4 diamond hotel in Thunder Bay Ontario. After finishing his diploma at George Brown College, he started his 15 year Journey with Fairmont Hotels working with some of the best chef’s in Canada at The Royal York, Empress Hotel, and the Hotel Macdonald. Jordan’s first opportunity as executive chef was for Kleinburg’s premier event venue and restaurant at The Doctors House and XXI Chophouse with over 300 weddings a year Jordan was able to build a name for himself in the luxury wedding market.

Chef John Cirillo has created a comfortable and unique environment where people from all backgrounds can share their joy of culinary creations. Whether it’s a birthday party, a team building event, or a Chef’s Table, every experience at Cirillo’s is sure to stimulate both your mind and your taste buds.

Farmr is dedicated to fresh made food each day in their open kitchen by the St. Lawrence market. They believe in transparency and not hiding any of their suppliers, ingredients or methods. As well, the restaurant’s entire menu is gluten friendly, unless noted otherwise.

Chef Kyle Webster is the co-founder and executive chef at Farm’r, and his work includes stints at Australia’s Attica and Carlton Wine Room, Toronto’s Hudson Kitchen and Globe Bistro, and the Grange of Prince Edward Vineyards and Estate Winery.

The Centre for Hospitality and Culinary Arts at George Brown College is focused on producing passionate and service-obsessed industry graduates for the urban culinary experience. Faculty and students from both divisions are thrilled to partner with the Feast of St. Lawrence to provide students with an experiential learning opportunity outside of the classroom.

Chef David Haman is a full-time professor in the Baking and Pastry Arts Division at George Brown College’s Centre for Hospitality and Culinary Arts. He has been a pastry chef for 20 years and has worked in world-renowned restaurants across Europe, in Japan and here in his home town of Toronto. David founded the Woodlot bakery and restaurant in 2010 and is proudly entering his sixth year as a professor at GBC.

Hawthorne Food & Drink was established for the sole cause of giving back to the community. On the one hand, the restaurant serves delicious food made from local, seasonal and sustainable ingredients. On the other, it provides free training and career development for people in need of skills and employment.

They serve ‘Farm-to-Fork City Food’ using local, seasonal and sustainable ingredients, and they pride themselves on being a designee of OCTA’s FeastON program. Their menus change often and take inspiration from the farms of Ontario and the neighbourhoods of Toronto.

Hothouse is one of Toronto’s destination food and wine eateries. Located in the historic St. Lawrence neighborhood, the restaurant is close to many of the city’s iconic landmarks and entertainment hotspots. Currently celebrating their 25th anniversary, Hothouse has undergone significant interior and exterior renovations with an expansive patio that offers views of the famous Flatiron building.

New this season and in celebration of their anniversary, Summer Fridays features $25 cocktail pitchers throughout the Summer, and on Sundays, don’t miss their award-winning Brunch Buffet with live jazz band.

Mangia e Bevi offers food based from Northern Italy, from the Veneto region. The Venetian People have a reputation for being direct and speaking their minds, and the restaurant offers food in the same way. Simple, fresh, honest ingredients combined the way they should be. The recipes come straight from Italy and, if they can’t find the right ones here, so do the ingredients.

The Omni King Edward Hotel was originally built in 1903, and has helped set the standard for luxury hotels in Canada. As Toronto’s first luxury hotel, it has long been the first choice of Toronto’s elite, as well as convention goers, political figures and business travelers.

Dine at one of the “King Eddy’s” on-property establishments where executive chef Daniel Schick and his masterful culinary team have created menus that feature locally sourced and seasonal ingredients. Enjoy breakfast in Victoria’s Restaurant, sip craft cocktails in the aristocratic Consort Bar, enjoy their Sunday brunch in Sovereign Ballroom, and experience traditional afternoon tea–a favourite activity of families and people-watchers since the turn of the 20th century.

An intimate and relaxed oyster bar and seafood restaurant with a wide selection of fresh oysters and seafood sourced from all over the world.

The Pearl Diver kitchen team is made up of cooks from many different cultures and culinary traditions, and they pride themselves on learning from each other to showcase a range of flavours and cooking styles on the menu.

Champion The Truth with Canada’s News Media and...