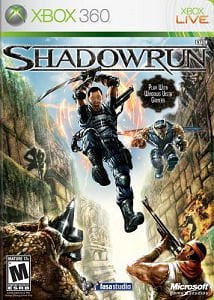 Shadowrun has all the pieces to make a great game. The concept is great, it doesn’t take long to learn how to play, and most of the graphics are pretty cool. But Shadowrun falls short in so many areas that it’s hard to justify paying top price for the game, and I’m not even sure I could see myself playing it much in six months time.

Based on the cool role-playing game of the same name, Shadowrun sets you down in a futuristic version of Earth where magic has returned to the world. While you can arm youself with heavy artillery you can also learn a certain number of spells to help you kick some butt. As well, you can choose between playing a human, elf, dwarf or troll, each of which have their own benefits and shortcomings.

You either fight to kill off the other team (you’ll either play as RNA Global or the Lineage), or to try and capture an artifact and take it back to your team’s extraction point.

And that’s about all you really get in terms of a story. Because the game doesn’t have a campaign mode where you can play through a storyline, there isn’t a plot to speak of. For me, that’s a huge failing point, but that’s not the only thing wrong with Shadowrun – not by a long shot. 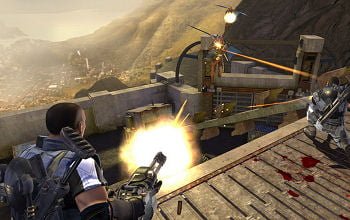 For one thing, since the game is based on the idea of playing closed-ended battles, there’s no such thing as a permanent upgrade or any way to develop a character. When you start a game you pick a race, and every player in that race looks the same. You then buy upgrades at the start of each round based on how many kills and hits you made during the last round. That effectively makes the magic system a mere add-on, with no options to extend those powers.

Not to be entirely negative I will admit that the game plays out really well – the few options you have for upgrades and add-ons makes for some wildly different battles. You can also really mix and match your spells with your technology to make every round a very different experience.

In terms of spells, there are seven different ones you can learn for up to $3000 each: Teleport, moving up to 8 meters in any direction; Resurrect, to bring fallen comrades back to life; Strangle, which creates crystals in a given area to slow down the enemy; Summon, to create a creature to protect an area or kill off a victim; Gust, which pushes enemies away from you; Smoke, allowing you to turn your body into smoke and not take damage from normal attacks; and Tree of life, which creates a tree that will heal you when you stand nearby.

The technology available includes: Enhanced vision, allowing you to see enemies through walls; Glider, a short-distance flyer; Wired reflexes, giving you extra speed and the ability to deflect bullets with the katana; Anti-magic generators, which are basically mines that suck up people’s magic energy; and Smartlink, a guidance system to help you aim at enemies but protect your teammates from being shot. 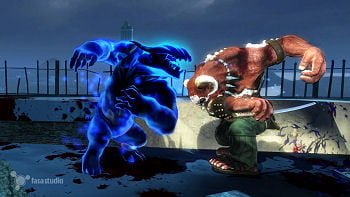 Available weapons include a rifle, a sub-machine gun, a shotgun, a portable mini-turret gun, a sniper rifle, a rocket launcher, and the katana.

As you can tell from the lists though, the options are actually fairly limited. You’re also stuck with only having up to three spells or technological items available to you at once. You have to keep your right trigger as the fire button, and then you can set the other trigger and the two bumpers as anything else, including grenades. This isn’t such a bad system, and you can change your set options at any point, but it lacks any real vision for creativity in gameplay.

There’s also no armour upgrades, only one kind of grenade, and as I mentioned already, the spells don’t get any better as you get more skilled.

Where the game really fails, and this is unavoidable to notice, is when it comes to finding a public game to play in, and when you notice some of the graphics. On the gameplay side of things, it’s not unheard of to wait up to 3 to 5 minutes for the system to match you up to a game, and sometimes the game is even under way already. For the graphics, you can’t help but laugh when you see people moving sometimes – going up ladders isn’t really even animated, and the dead body physics are practically non-existant.

I can imagine a really kick ass game lurking around somewhere inside of Shadowrun, but apparently it’s not allowed to come out and play. If anything, and mainly I mean if this game is enough of a hit, I could see developers taking the next step with the sequel. It could be a mind-blowing shooter, but I could even imagine it as a decent role-playing type game where you explore the world and quest your way to some key magical artifact that everyone wants (think Halo 2, but with magic and permanent upgrades).

The trouble is, that’s a long way off, and while I also have hopes that downloadable game add-ons will make it to the Xbox 360 marketplace, I’m not going to hold my breath yet. What that means is that for the average player this is really just a rental, and not the kind of game you’ll want to buy. Any group of friends could enjoy this game for a few weeks, but I see it growing pretty thin after that.