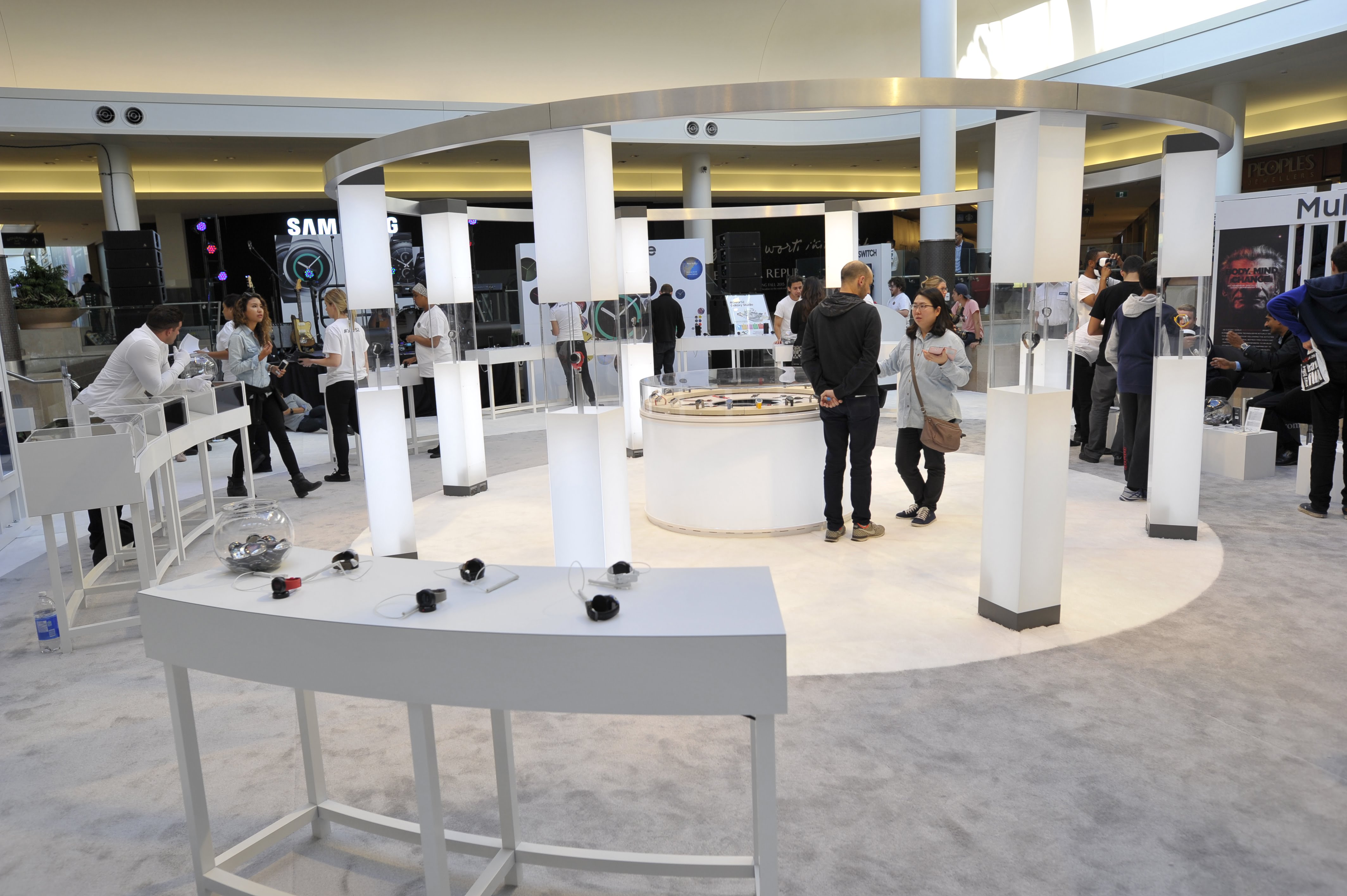 Samsung Canada has been showing off their latest gear ahead of the holidays–including the new Samsung Gear S2 watch–for the last few weeks at Sherway Gardens, and to kick it all off they had Hamilton’s own The Arkells perform an intimate acoustic set. Chatting about the space and the show with Chief Marketing Officer, Mark Childs, it was clear they had made at least one new fan.

“I actually am not going to lie,” Childs said, “I’ve actually paid and I downloaded the Study Music acoustic EP, last week. I’ve turned into a maximum Arkells fan.”

While Samsung will open their first Canadian store on November 20, which features 2535 square feet of retail space, Childs talked about the brand’s goals to reach Canadians, and engage with them, in a range of venues, spaces, and environments.

“We’re going to hopefully be open a little ahead of [November 20], but as you know with any project like this we’re inking [that date], but our hope is to be open a little earlier,” Childs said.

Read the rest of the interview with Childs below, and stay tuned for more news from Samsung in the coming weeks ahead of the holidays. 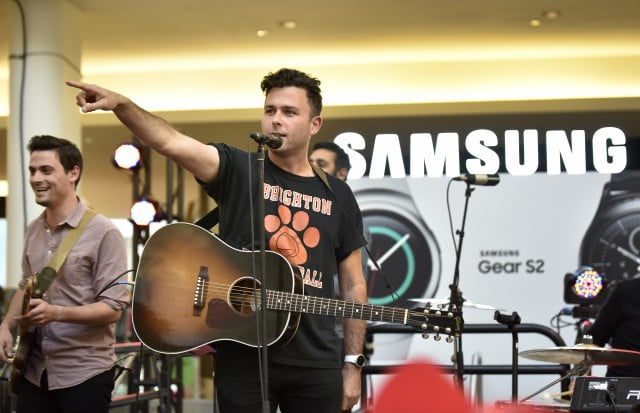 The Arkells at the Samsung Studio

Andrew Powell: One of the things I just wanted to ask you about, to get your official take on, was for the Samsung Studio, what’s Samsung Canada’s goal there? What are you guys trying to establish? What are you trying to get across with the public?

Mark Childs: “Andrew, what we’ve been trying to do for the last couple of years, and we’ve been building against the same goal in pretty much all of our marketing demos, is to try and bring the brand to life, bring the Samsung brand more meaningfully to life for Canadians by connecting with them, with their passions. Whether that be hockey and NHL, whether that be music and the Arkells, whether that be film with something like the Toronto International Film Festival. I think what we’re trying to do in this Global Galaxy Studio is actually bring the innovation to life. There’s been a lot of great innovation this year and we really wanted to bring it to life in a way that can show Canadians, show those folks that are going to visit the space, to see and show and interact with the innovation so they can see how and what it can do in their lives.”

Andrew: I can say with my limited experience at the Studio, but even just the other things you guys have done, especially WayHome Music Festival, for me the connection to music seems like a very natural fit.

Mark Childs: “Yeah. I think we certainly know, for many of us, but certainly if you and I were a little younger millennials, music makes the world go around. Certainly in all facets of music, whether it’s getting intimate with a band and taking new selfies and video and social video with the band or whether it’s downloading and enjoying music. Even in our technology with our latest audio innovations in the Radiant360 with Radiant ring technology. Bringing music to life through a new audio technology or even, as you probably experienced or you saw at the studio, the Soundcamp app. Being able to now enter in the world of deejaying and curating your own music. Technology is at the center of music.”

Andrew: I would tend to agree. You’ve obviously had reactions, you’ve talked a little bit about the concert. What about your reactions to the space and the Samsung Gear S2 watch?

Mark Childs: “Yeah, first and foremost we’ve been up what, now? Just shy of a week, and we’ve had about just under 150,000 people walk through the space.”

Mark Childs: “We’ve had much more intimate interactions with folks. We’ve actually connected directly in conversation and demonstrations with over 20,000 people. There’s no question that virtual reality is the most consistent draw. I think for many Canadians it’s still a new experience and the lineups are consistently there. It’s hard to get someone out of the chair… [for some of us], we’re all so used to seeing this technology, but it’s still new.”

Andrew: Right. It’s not widespread yet either.

Mark Childs: “It’s not. I think the gear VR is the first look at something that makes virtual reality more accessible to everybody. I think that’s definitely a major draw. I would say that actually getting a chance to interact with the Gear S2, which of course as you saw is at the center of the studio, the design inspiration for the studio, that has been incredibly engaging. People are really enjoying the opportunity to see a design forward wearable. I would say, generally speaking, the feedback we’re getting, and I’ve got a bunch of verbatims… I never like to use the ‘N’ equals one sample. The feedback really is remarkable. People actually can see themselves wearing this tech and that would be the overarching impression that I think we’re getting on the Gear S2.”

“People love to get creative, they’re loving making those buttons. It’s simple interactive. What better way to literally bring to life the fact that the Gear S2 is so customizable to your mood, to your fashion, by changing the watch faces and creating your own in a cool interaction with an S Pad. We’ve really been surprised at the response, we’ve been really delighted with the level of engagement of folks that have been visiting the studio.” 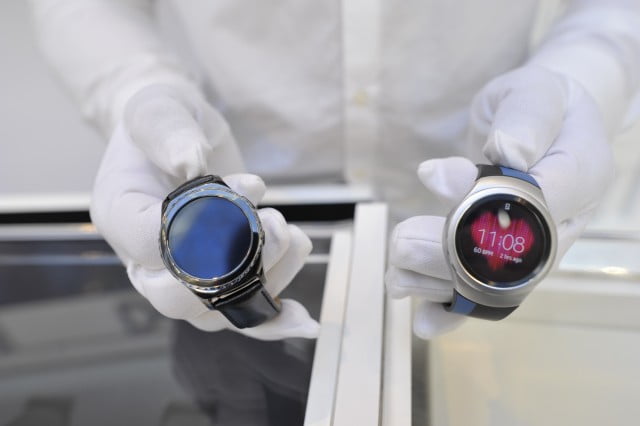 Andrew: That’s great. So, what do you want people to walk away with after they’ve left? This comes back a little bit to the first question, but what do you think they’re going to walk away thinking or feeling?

Mark Childs: “Again, I hope that they feel a little bit more connected to us as a brand and the innovation that we’re bringing to the table. Clearly, and I’m going to feed into your next question, directly… let’s hope we spark their intrigue for Christmas gift giving for themselves if not for others.”

Andrew: I love gift guides. It’s almost another reason why it’s my favorite time of year. For you, I hate to make someone pick their favorite babies, as it were, but what’s the top three things that you want people to know about for the holidays?

Mark Childs: “I think to me, for sure, the Gear S2 is a game changer. We’ve described it as a wearable for watch lovers or a wearable to get your watch wearing a watch again. I do think it’s one of those items that I think, from a design aesthetic, from a functionality perspective, the fact that it’s Android compatible beyond just Samsung. I think really tops my list or my pick for the Christmas gift guide. I do think the Radiant360 audio for the audiophile, it is something you haven’t heard before. The audio qualities coming out of this omnidirectional radiant ring technology stops people in their tracks. I think we’ve been hearing that in the studio.”

“For my third pick I would say we know that tablets are a gift giving go-to, and the new tablets too. The first time you can actually pick up a tablet and feel like you can hold it and really indulge in your reading material. It’s lightweight, the screen quality is incredible, it’s optimized, obviously from a reading experience, perfect way to augment anybody’s personal time whether it’s reading, whether it’s consuming content, surfing, what have you. Those would be my holiday picks. I’d be remiss to say nothing of yesterday’s announcement of the upcoming Galaxy View [with Bell].”

Andrew: I was going to ask you about that…

Mark Childs: “Okay, I think that would be the dark horse for the holidays. I think it’s one of those new inventions that’s really creating a new category, I really think that. Personally, from what I’ve seen and what I’ve experienced, I know it’s on my personal gift list.”

Andrew: So the question for me is what do you call it? Is it a tabl-vision? A tel-blet? [Laughs]

Mark Childs: “I’ve been talking with the team, it’s a new way to view content. It’s a new way to view streamed content, whether that be TV or video. It’s certainly a new way to surf the web and do what we do in apps and online. Of course, I think about my own personal use, you can take it wherever you want to go. It’s wireless, not in the sense of wireless, but it has no wires.”

“You can take it where you want to go and you can stream content on your own or with others. I’m avoiding trying to pigeon hole it. I think it’s so much more than a bigger tablet.”

Andrew: Will you be upset though if people do call it a tablet?

Mark Childs: “I think the potential for this device is so much more than that. Yes, it’s a personal device, but it can be also a social device.”

Andrew: Yes, you’ve shared a lot of the photos. It looks awesome.

Mark Childs: “It’s perfect. I can imagine that being my additional only device up there.”

“It’s been built to stream, of course, it’s so immersive and portable because of its size. I think the only thing I’d say about the tablet analogy is I think it underplays the opportunity of a device like this to be used for interacting and sharing with others. I think ultimately people are going to find uses for this Galaxy View that we may not have fully seen yet. Again, I worry sometimes that we try and describe something overly.”

Andrew: Great. Thank you very much. I really appreciate it.