Review: Sea of Thieves on Xbox One X 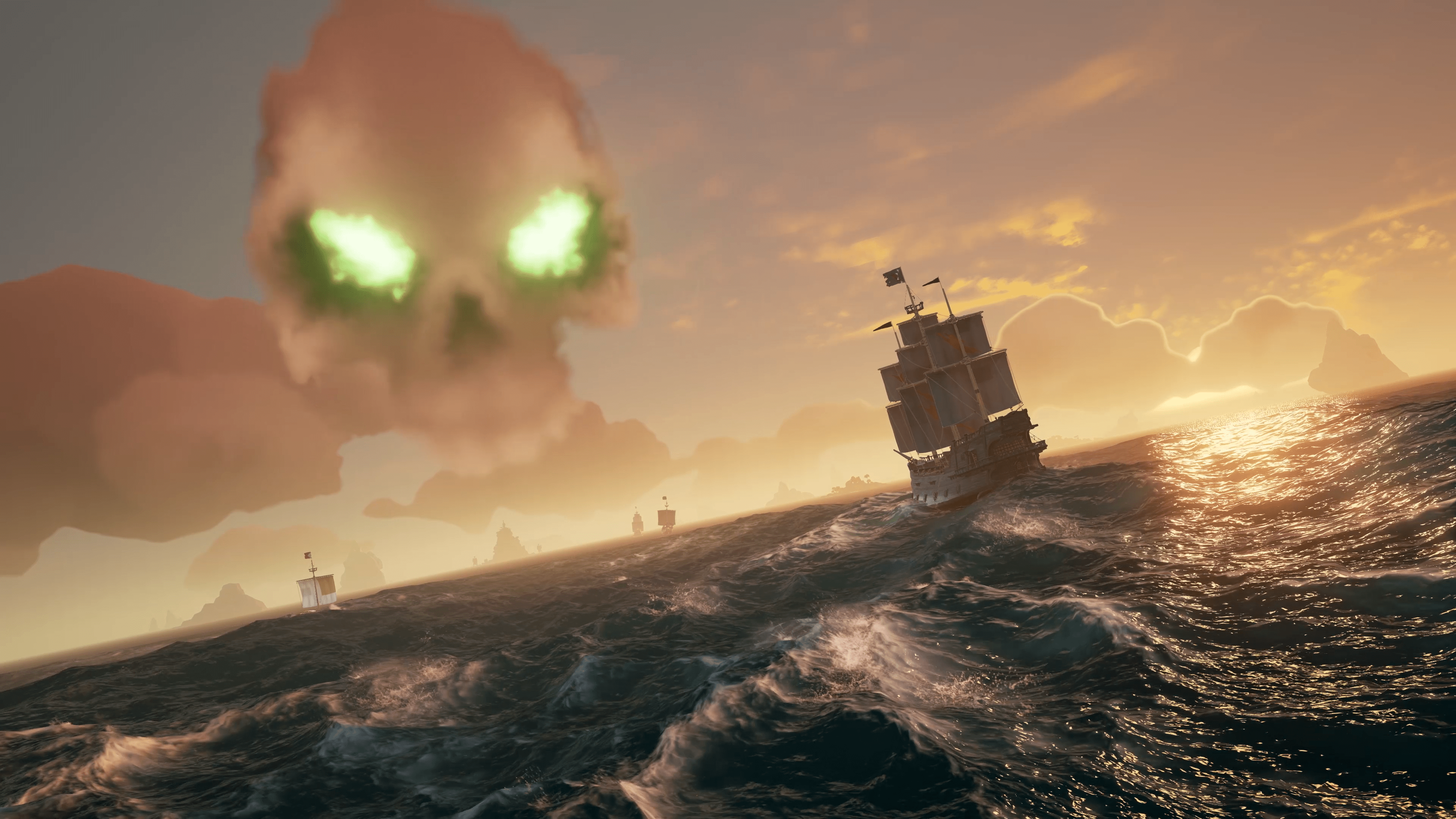 Pirates are cool. Forget about the scurvy, the diseases, and the risk to life and limb–the life of old timey pirates looks badass, and Rare’s Sea of Thieves is an attempt to put a comic spin on that cool factor, and let you live out the joy of the high seas with a group of friends.

Where the game gets things right, Sea of Thieves is refreshingly unique, and where it fails, it falls flat on its face, and some of the things in the middle just end up feeling mediocre.

It’s a game that is shockingly easy to love, even when it’s frustrating, but Sea of Thieves is also absolutely not finished either, and the best that the game will have to offer is yet to come as Rare launches expansions to the game, like last week’s The Hungering Deep that adds a hunt to kill a massive Megalodon shark. 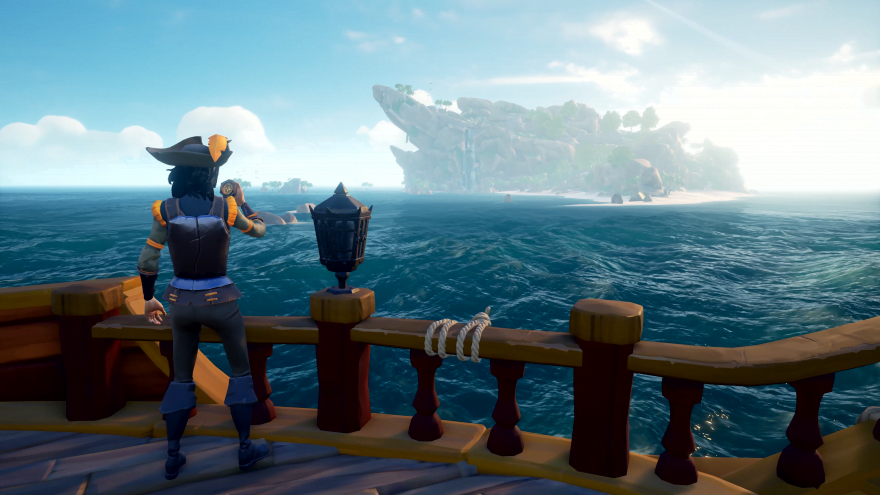 The first problem with Sea of Thieves comes right when you start. You create a character, pick a boat, and go plundering or fighting, but the game offers no real direction to start. The game is almost literally a crash-course in pirating as you try to figure out what planks are for, how to draw your weapon, or just what it takes to find where you’re going.

I felt so lost I wondered if I’d missed something, or if I was supposed to talk to an NPC on the outpost where you start, but then I eventually realized that the goal is to set you off and figure things out. And to be fair, most of the game will come pretty easily to most gamers, there’s just a learning curve here or there, but the game is made to be completely open for players. You can start quests any time, or just wander off and see what trouble you can get in to.

One of the most important choices you will make in the game, however, is at the very start when you pick your ship size, and whether you’re playing solo or with a crew.

If you pick a galleon as your ship, you can either invite friends to play on your ship, or you’ll need to form a crew with other players, and you’ll have to find a way to work together to sail, fight, and complete quests.

Picking a sloop, you can play alone, or play with one or a couple of other players. Choosing to play alone though means you have all the freedom you want, but a lot of quests are not possible, including The Hungering Deep.

For anyone who has a few friends that all want to become pirates, the game is a lot of fun. It’s goofy, and sometimes even weird, and definitely challenging to figure out how to work together to sail and complete quests. There’s also ample opportunity to go fight other crews, plunder their treasure, and take on some of the biggest challenges in the game, including the Skeleton Fort, which is essentially a well-guarded fort populated with dozens of skeletons.

I played almost exclusively solo in the game, and it was fun at times, but there are a lot of times where it feels like you’re just sailing, or looking for things. Playing with a team, you still have those moments, but it’s generally a lot more fun.

The only down side to sailing with a bigger crew of random players is that there is a good likelihood that you won’t all be able to work together well. That can be fun, or it can be aggravating, depending on the players. If you’re only having trouble with one player, you can lock that player up in the brig, but it’s also possible that players can lock you up for no reason, and the only way out is for them to release you, or for you to quit and load up again. 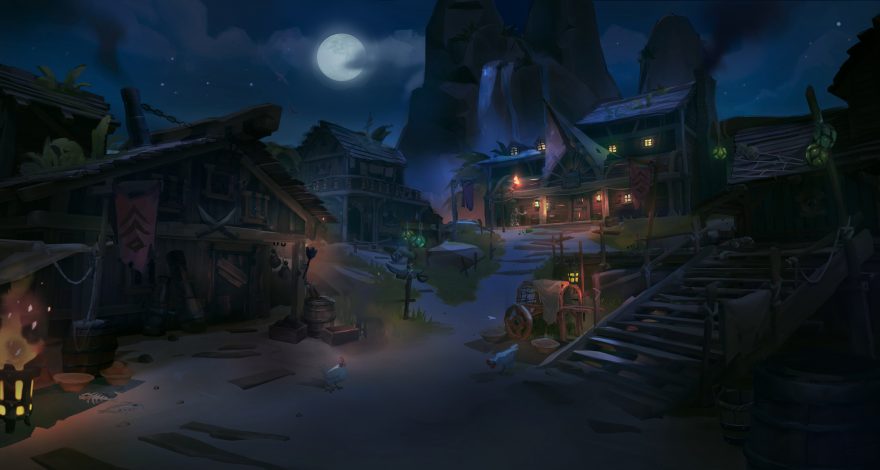 Whether you play solo or in a group, you can either randomly sail and look for trouble, or you can embark on quests, and ultimately those are what will level you up in the game.

Quests are broken up into three main types, outside of expansions like The Hungering Deep. There are treasure quests, provided by the Gold Hoarders; bounty quests from the Order of Souls; and trade quests from the Merchant Alliance. You can find Gold Hoarders, Order of Souls, and Merchants at any outpost in the game, and completing a quests levels you up to get better, tougher quests with better rewards.

So after you load into the game, you’ll arrive in the tavern on a random outpost, and outside you’ll find about a dozen different buildings. The outposts will be arranged a little differently, but all of them have the same buildings, so the first goal is to figure out what quests you want, and go find the place to pick one.

Before you leave the outpost on your ship, you can buy a few quests, but once you get on your ship you have to pick one quest to embark on, and only then will you get the map that will lead you to what you have to accomplish.

For treasure quests, you’ll get a treasure map that shows an island on it, and you need to look at the ship’s map and find the island that looks the same and set sail for it. Once you land there, you look at the map, find the spot to dig, and dig up the chest. Your job is then to get the chest back to the gold hoarders without sinking your ship or losing it to other pirates. If you succeed, you’ll be paid when you bring the chest back.

The other quests work much the same way, except that bounty quests are to kill a skeleton captain and bring back their skull, while trade quests require you to find animals, barrels, or crates and bring those back to the right outpost.

The only quests that differ are unique quests like the Hungering Deep, which involves a series of steps to find the shark everyone now calls Meg, and then defeat it. (Defeating the Kraken is more about luck, as the Kraken just randomly appears, and mainly seems to attack galleons.) 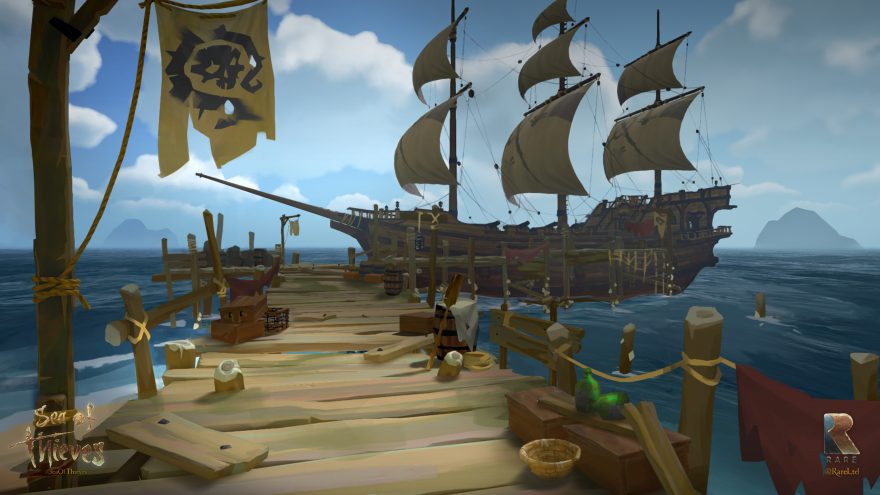 The controls and gameplay are fairly simple. You move with the left stick, look with the right, and the buttons are for jump, interact, stop/cancel, and pick weapon. You then have an item menu and a map menu, opened with the left and right bumpers.

You can swim, and stay under water for quite a long time–approximately 90 seconds–which is great for sneaking up on enemies or diving for treasure on sunken ships.

In terms of fighting, you can equip a cutlass (sword), and a gun, or you can choose to have two guns. Guns have a limited number of shots–5 to be exact–and then you’ll have to scurry back to your ship and reload from a box in the map room.

You can purchase different cutlasses in the game, and some of them cost quite a bit (the most expensive is 20,000 gold), but all of the cutlasses work and act identically. There’s no benefit to buying an expensive sword–it just looks a little cooler.

Pistols, Blunderbusses (essentially, a shotgun), and the Eye of Reach (a sniper rifle) likewise come in different designs, but they do the same damage as the free weapons you start with.

On the ships, you will either have two canons, for the sloop, or eight, on the galleon. You can carry a pile of canon balls with you, and then just load the canon, aim, and fire. The only tricky aspect of canons is that you will need to account for the ships rising and falling in the water to hit a target, and the goal is to hit a ship below the water line to make it sink.

Lastly, if you want to go shopping in Sea of Thieves, you can stop at any outpost to buy new clothes, eye patches, or sails for your ship, but they’re not cheap, and like the weapons, they’re costly simply for the sake of design. I’m all for a game that focuses on making things fair and even, but it would be nice if you could buy something that provided a perk or benefit. Otherwise, earning gold seems absolutely pointless to me. 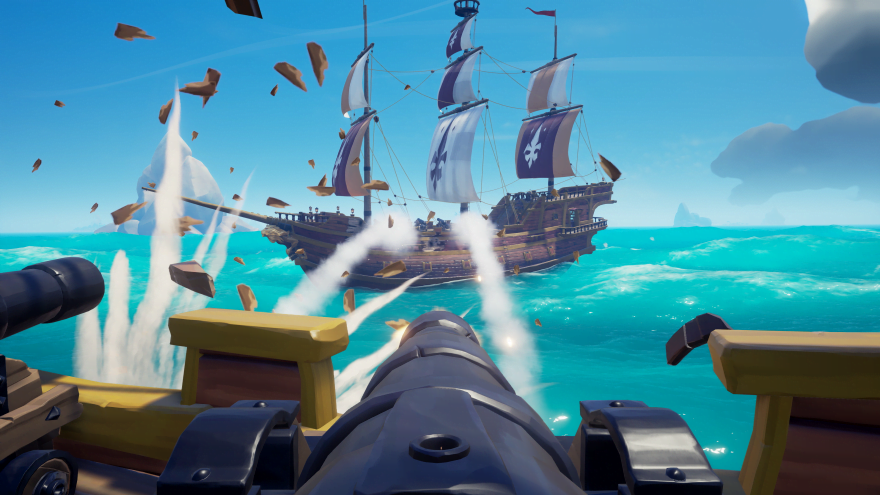 And then there’s sailing. Sea of Thieves has one of the most original mechanics for sailing that I have ever seen in a game, and while it’s creative, it also adds a whole other layer of complication that you have to deal with.

There are three things to control when you’re sailing: the anchor, the wheel, and the sail, but the sail not only positions higher or lower, but you can also set the sail’s angle to take advantage of wind direction. To leave port, you turn a giant crank behind the ship’s wheel to lift the anchor, then you go to one peg on the ship’s rail to set the sail length (the more sail you draw down, the faster the ship goes, naturally), and you can then also go to a peg right behind that one to turn the sail to catch more wind.

Wind is slightly transparent, and can be seen blowing across the top of the screen as you sail. If you’re trying to get going quickly, or outrun other pirates, setting the sail to catch the most wind will make a big difference.

The only real problem is that the sail is right on front of the ship’s wheel, of course, and that means that when the sail is down all the way, it’s a bit hard to see straight ahead.

Because of some design choices, not all game elements look gorgeous in 4k, since they’re meant to be slightly comic, but overall the game looks amazing on the One X.

Given a few more things to do, upgrades, ways of playing solo while still trying some of the quests, Sea of Thieves could be an incredible game. Right now, the game is held back by a lot of wide open spaces, not enough to do, and not nearly enough direction. I could see the game getting a lot better as expansions are released, and Rare fine-tunes some things, but right now it’s a title that you may want to explore, but may not come back to often.

If you’re an Xbox Game Pass subscriber, you should absolutely check out Sea of Thieves and come back to it again later. If you’re debating on buying the title outright, I would suggest you may want to come back later in 2018. Perhaps by Halloween, Rare can bust out some surprises for the solo players too.