DJI FPV review | One of the most exciting drones ever 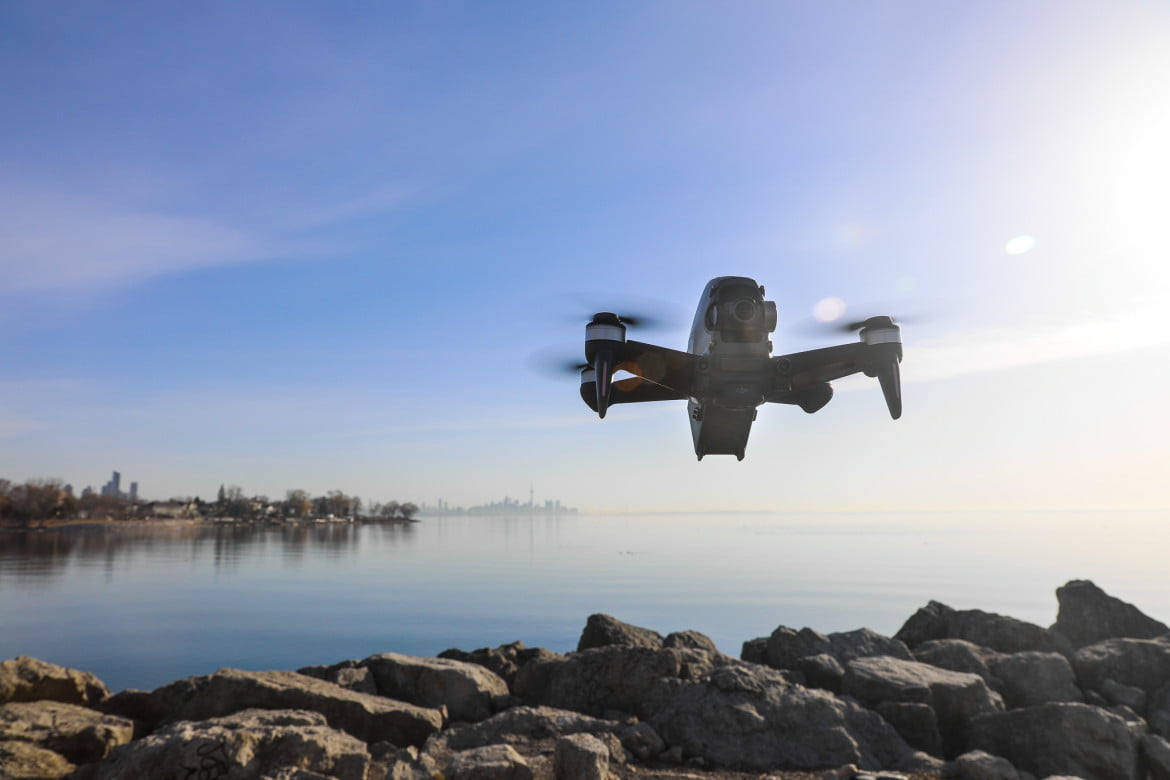 I’ve been flying drones for a few years now, and DJI quickly became my favourite brand because they not only innovate, but they also build on their best products continually to make the most compelling experiences. With the DJI FPV, the brand delivers one of the most exciting drones to date, like nothing else I’ve ever flown.

Wearing the goggles the view from the drone is incredible, and whether you just want to feel like you’re flying, or actually want to become an FPV expert and share that footage, the DJI FPV checks off a lot of boxes for beginners, and experienced flyers.

Read my full review below and watch my flight over Toronto.

DJI has been making all of their drones foldable for the last few years. However, DJI FPV is a fixed design that feels sturdier, while also offering a level of customization and the option to repair the drone that’s a first for the company.

You can change out the cover to another colour, from black to green, and elements of the drone can also be replaced if you have an accident, including the gimbal, landing gear, or arm braces.

At 795g, the DJI FPV is fairly hefty for it’s size, and a big part of that is the battery that weighs 295g. That’s just a notch more than the Mavic Pro, but less than the Mavic 2, for comparison.

While the Mavic drones are wide and long, the FPV is taller, with an angled design that’s made for serious speed. The design is unique, but it makes it difficult to fit into some camera bags, so for anyone looking to buy the FPV, my first advice is to make sure you get a backack or case to carry it in.

The standard DJI FPV combo comes with the drone, controller, and goggles, plus a battery, and setup takes about two or three minutes. Setup includes attaching the propellers, connecting the battery to the goggles, turning everything on, and choosing a take-off spot.

Since it’s FPV, and you’re flying while wearing the goggles, your phone actually connects to the goggles with a cable when you need to update, but generally you don’t need the phone attached.

Otherwise, the goggles pair with the drone so you can see the video feed, adjust settings, and it offers a few basic controls. The trick is just mastering the remote controller so you know which buttons do what, since you won’t be able to look at it while you’re flying. From my experience, that comes pretty naturally after a little time, but it can take a little practice.

Video through the goggles is 810p at 120 fps, so it’s very clear, fast, and responsive, no matter what mode you’re flying the drone in.

I like the goggles and the controller quite a bit, and you can adjust the goggles a bit with two little sliders under the headset that will help you see the screen inside more clearly. I did find that I had to wear my glasses in the goggles, and that parts of the screen were not as clear as I would have liked. Part of that issue may just be the distance between my eyes. Generally though I could see everything well.

Both the goggles and the drone take a microSD card, so if you ever lose the drone, the goggles will have the footage available.

Overall, the drone and system worked very well in my tests, and if you’re looking for something different, DJI also sells a separate Motion Controller that’s offers a very unique way of flying. Instead of a two-handed controller, the Motion Controller reacts to the direction you it in, with a trigger for speed control. It’s a fresh way of flying that takes a little getting used to, but works very well.

In Canada, one of the first things you need to know is that you’re required to have a spotter when flying the DJI FPV. That’s because Canadian law requires someone to be able to see the drone at all times, so someone else has to spot the drone for you. Alternatively, you can try flying the drone without the goggles on, but that essentially defeats the purpose of the FPV drone, and if you’re filming, you won’t really see what you’re capturing.

Since FPV doesn’t provide controls on your phone, taking off with the drone is also different. On the regular controller you hold the sticks down and toward each other, to start the propellers, and then push up to take off, or on the motion controller you press the lock button twice to start the propellers, and then hold the lock button for it to take off.

The drone will fly for up to 20 minutes, and the speed is really remarkable, whether you’ve flown DJI before or not. In Manual or M mode, the drone can fly up to 140 kph (87 mph), and can accelerate from 0 to 100 kph in just two seconds. Manual mode does require some practice though, and I definitely don’t recommend it to beginners as it disables all of the basic safety features of the drone, including obstacle avoidance.

For beginners, Normal or N mode is the best bet to get used to the drone. It will hover in place, offers front-facing obstacle detection to warn the pilot of potential issues, and the maximum speed is around 54 km/h.

In Sport or S mode, the drone is slightly more manoeuvrable than N mode, and can reach up to 97 kp/h. This is a great middle-mode for most users, it doesn’t require quite as much experience as M mode, but it’s a lot faster than N. Most of the time this was my favourite mode, since it requires a little practice, with better footage.

Now, if you know what FPV means for drones, the biggest trick is trying to get that floating, liquid motion that you’ve seen on TikTok and YouTube. I never did master the style in the few weeks I had to try it, but flying the drone did get more natural.

For my style of flying, the DJI FPV made me a little nervous at first, to be completely honest, but you do get used to it, and I think the trick is just practice, practice, practice. Take it slow, and if you want to try something easier to start, DJI’s Flight Simulator is a great tool to get started.

The drone has a number of great security features, including the reliable emergency brake, if you need to stop quickly, and if the signal is lost for some reason, Failsafe Return to Home will make the drone return to the takeoff location.

Finally, the FPV drone includes OcuSync 3 for clear, sharp transmissions, so you’ll always see the best possible video quality through the goggles at up to 10 km away.

The video from the DJI FPV is incredible, and it looks stunning without any editing, from colours to brightness. With 150° field of view, the video is like nothing else most pilots will have experienced, and the single axis gimbal gives you the room to capture the motion of the flight.

Offering up to 4k 60 fps video, at 120 mbps, and with distortion correction, even just watching the video on a big screen can feel a bit like flying.

While I tried to imitate pilots who captured those seamless, fluid videos I talked about before, in practice it takes a lot of work to pull that off, and you’ll likely need to fine tune the configuration to get the best results. That can include adjusting how quickly the camera moves during flights, and you can make the control sticks stiffer, to get smoother motion.

In many of my flights, because of 150° field of view, the propellers were often visible in my footage, especially when I was making quick motions up or down with the drone. If you’re picky, you could crop this out of your videos, at the expense of some resolution, or you can try using N mode, which does reduce this effect a bit. To me though, this is just the facts of life with a wide-angle drone, and I don’t really think it it’s a factor, depending on how you edit your videos.

If you don’t need 4k video, and you want something really different, you can also film in 4x slow motion, at 1080p and 120 fps.

Overall, I was pleased with the video quality, and I’d bet that I could have mastered the smooth FPV video style of some pros with a few more weeks of practice.

DJI FPV is available for $1,299 USD through the DJI store, and through retailers, and the DJI FPV Combo includes the FPV drone, remote controller 2, FPV Goggles V2, a battery, and all required cables. For an additional $299, the DJI FPV Fly More Kit also includes two additional batteries, and a dedicated charging hub.

The Motion Controller retails for $199.

DJI Care Refresh is optional, of course, but for the extra cost you get a full year of coverage for replacement parts or up to two replacement units. If you’re not experienced with FPV, or you’re planning more challenging flights, I would highly recommend that the extra investment is worth it if you crash, or lose the drone.

For anyone who wants to get into drone racing, FPV flying, or a new style of capturing drone video, I would absolutely recommend the DJI FPV. There’s simply nothing else like it out there, unless you want to build your own drone. It’s an exhilarating drone to fly, that will challenge you, and with practice, make you an even better pilot.