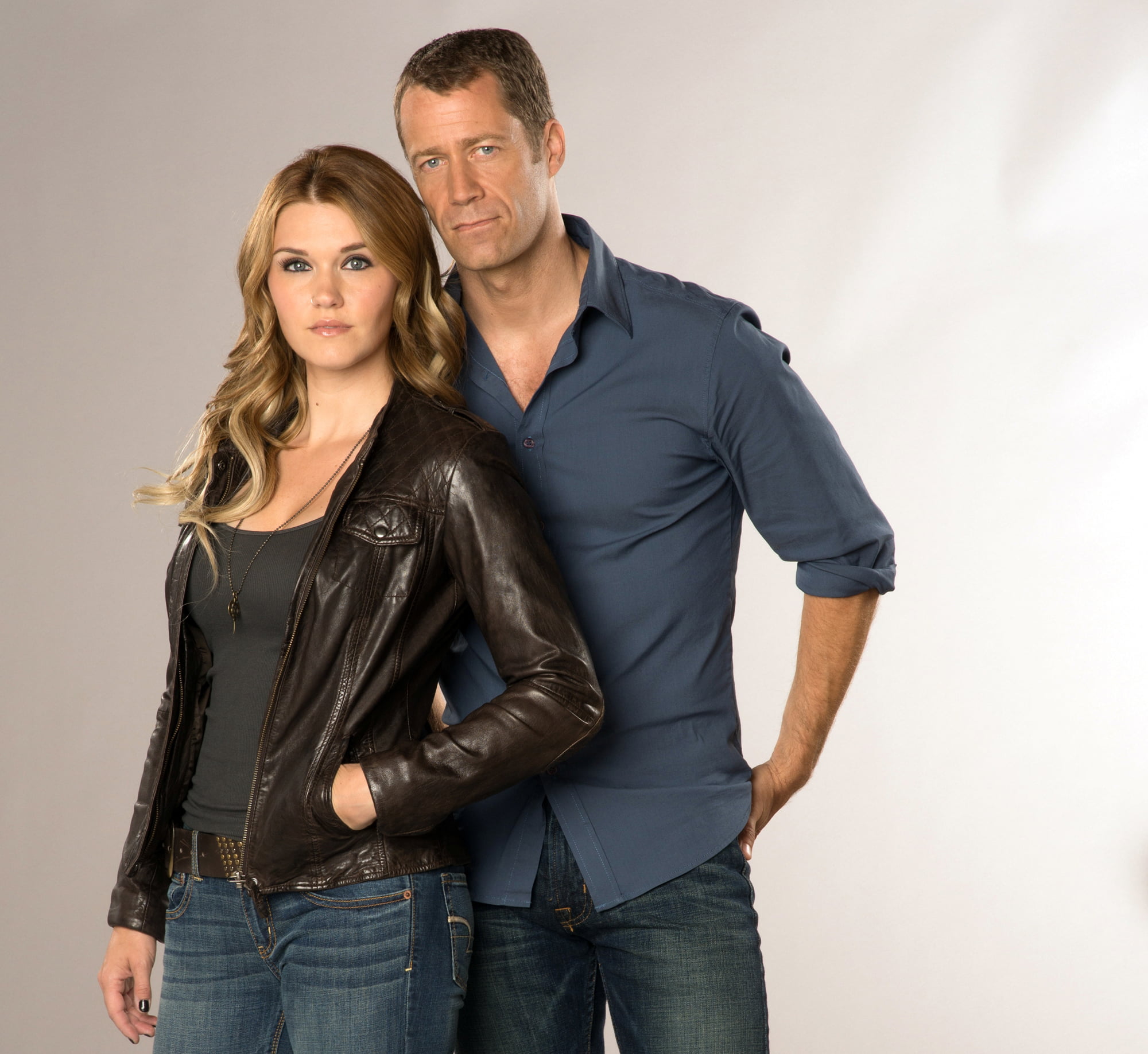 Season four of Haven is drawing to a close on Showcase, but there’s still time to catch up with the show’s newest co-star, Colin Ferguson, to chat about his character, joining the cast, and the contingent of Canadian actors on the series.

For those who somehow don’t know much about Ferguson, he starred in Eureka, and also directed and produced a number of the show’s episodes, plus he’s starred in numerous films, including Because I Said So, Rowing Through and The Opposite of Sex.

Arriving on the scene in Haven, Ferguson plays William, a stranger with a lot of knowledge about the town, and Audrey Parker herself, including a past that she can’t seem to remember. As new Troubles loom on the horizon, there’s an apparent price to be paid if William can’t help Audrey remember.

Here’s the full interview with Ferguson, and otherwise catch the finale of season four of Haven on Showcase on Friday, February 7 at 9:00 PM (ET) and 6:00 PM (PT). The series is set to return for season five with 26 episodes starting in the fall of 2014.

What was your first impression of William, and how has that changed since you took the role?

Colin Ferguson: “I guess when it all started was I was in Los Angeles and I’ve been friends with Shawn Piller for many, many years. And for years he’d say, you know, like, we’d love to have you on the show and then, great, I’d love to be on the show, but, you know, you’re never sure if that continues. And – so this year he came to me, he said, you know, we have this character that’s actually, you know, is going to be a real character for a season on the show, are you interested? And I said, yes, I said, so what’s the character about? And he said, I can’t tell you, you’ve got to come to the writers room. So, you know, I’m thinking, like, my God, what is this? So, I go to the writers room and my first impression of William was that he was going to be fun to play.”

“They said now what we’re going to try to do in the writing is write him so you don’t know if he’s good or bad. And for every time that you think, now you know, ‘now he’s good,’ you’re going to go, ‘wow or is he really bad?’ And I have to say they’ve succeeded brilliantly.”

“You know, every time an episode airs people go ‘wow, I still don’t trust him, but is he good?’ You know, and that’s exactly what the writers wanted to do. Why I like that so much was that as an actor it gives you so much to play. You know, in any given scene, you know, being able to, you know, go right or left or good or bad with a line or a look, is it going to be endearing or are you going to think he’s up to something, it gives you so much latitude and it’s such a gift to be able to play over the course of the season, so I knew it was going to be fun and that was probably what attracted me first and was my first impression.”

“…I’ve seen every season they’ve done, I think it’s the best one. There’s so much going on with everybody, I love what they’ve done and we did a little bit of this in Eureka in Season 4 where all of a sudden everybody was doing different things, we went back in time and then came back and all of a sudden Fargo is running GD.”

“And what it does it keeps the qualities, the relationships the same, but everybody’s job turns. So there’s so much more interaction, you know, here in the town and I think that’s what’s happening in Haven this year, which is really, really interesting. It gives a lot of people more to play, it sort of fills the things with a lot more life, and consequently I think the reaction is that it’s a really popular season.”

There’s a few love interests floating around, particularly around Audrey. What about William, are you going to get in on that action this season?

CF: “Yes, I mean there’s so much that happens over the course of the season. Yes, I would say that there is affection for William at some point by some of the characters. Maybe all the characters, I can’t speak for them. Maybe secretly they harbour a few affections for William. But yes, no he–there’s definitely something that happens with William and–in that respect over the course of the season.”

What was it like working with this cast because, it’s a bit of an established group that you’re coming into and I’m wondering how that works with them?

CF: “It was great, short answer. Longer answer, I’ve known Emily for years because of all the sci-fi stuff we’ve done. We’ve done press together, sci-fi events for years.”

“And the fact there was one, I think at the Orlando event, Josh Dates and I we did everything we could to make her sick on roller coasters. We’re like, let’s have butterbeer before we go on the Harry Potter ride.”

“We were doing everything we could, and we couldn’t get her to be sick. So we’ve obviously had a lot of fun through the years with each other.”

I’ve done a movie with Lucas [Bryant] in the past, so I knew him. I knew Shawn obviously from years before. I’ve known Eric [Balfour] for years. I didn’t know Adam [Copeland], but what a phenomenal guy. He doesn’t get the due he’s due on that show.”

“He toes the line amazingly, he plays his role great and he knows exactly what he’s doing. So you show up in this town, you know, you fly 12 hours door to door from LA to Chester, and even though you’re friends with everybody you’re never really sure how it’s going to go, you know, like you never work with anyone before, working, you know, people’s bugaboos come out when they work.”

“Emily hasn’t worked in a month because she’s just had, or six weeks, she’s just had a baby. They’re shooting a lot of her stuff in the first five days to sort of catch up. You know, I’m a new character that they’re introducing, it was all this crazy pressure and people couldn’t have been nicer.”

“It was–they were so welcoming. There’s not a ton to do in Chester so at night you end up, you know, having dinner with each other, playing cards–no joke–you end up playing cards in someone’s house. So it’s a real family sort of feel and it was–even though four years in you think there’d be some patterns that are set in stone, people seemed, you know, excited to have me there and they were really kind, so–and it’s not always that way.”

“I mean coming off of Eureka, you know, which was my home, you know, for many, many years, I was nervous about going on some new set and you know, how are they going to be, please don’t be mean and you know, the last thing you want is to get on a set where it’s just awful and toxic and you know, no one gets along.”

“So–especially because I was doing eight episodes with them and I get on and it was just the opposite. It was a really good transition, a wonderful experience for me.”

You mentioned before that you’re friends with the creator of Haven, but what drew you to watch the show in the beginning when you were a fan?

CF: “I didn’t have a choice in the beginning. I mean, I was, you know, I’m friends with Lucas and I’m friends with Shawn, you know, and your friend goes like, my show is premiering, so I was like, well I’m there. So, I mean, yes, no, there was no choice in the beginning. Way back when it started I was at the first premiere party because I had to be. I mean unfortunately I couldn’t watch it for many years because I was shooting in–I couldn’t watch it live I should say, because I was shooting in Canada when it wasn’t airing, and then I was back in the States when it had already aired because of when we were shooting our season.”

“So I even catch up with it on Netflix during my, you know, rest and recovery from–and also because I had to go to the finale party because Shawn would call me and goes, we’re doing a finale party, you’re coming. So I would go to that.”

“So I was going to the–to their, you know, celebration parties every for years and years and years. So I sort of followed the show. As I was on Eureka doing my show, sort of like, hey, you know, it’s great, we’re all working, this is going great.”

“And so to ultimately get to be on their shown was really nice, was really, really nice. So that’s how I came to watch it.”

CF: “Just little stuff I’d love to say. The crew in Halifax was phenomenal. I know maybe that doesn’t mean anything to anybody who watches the show but like what a lovely group of people and just great at their jobs and so involved. I was at a bunch of their houses, there was a lovely party that one of them threw, you know, for everybody on the cast and crew and Chris Ball threw. And it was–it’s just a lovely group of people.”

“And… everybody’s Canadian. I mean I’m Canadian, Lucas is Canadian, Adam’s Canadian, Emily and Eric are not, but it’s a Canadian show and it’s really nice to see the Maritimes you know, portrayed. There’s not a lot of the stuff because I don’t think of anything, what you got, Republic of Doyle and you got us… it’s a beautiful part of the world, so it’s really, really nice to see it on screen I think from a Canadian perspective. From an entertainment perspective, this is the best season that they’ve done and we’re really proud of it and it gets bigger and bigger as the season goes along so I hope people tune in, I hope they enjoy it.”