The second season of Marvel and Netflix’s Luke Cage plays a lot like the gritty comic book adaptation’s first season, albeit in reverse. While the first season got off to a rollicking start, that energy level petered out about halfway through, leading to a lacklustre conclusion that felt more like a build towards future installments than something more satisfying. In this revival, following a genuinely great first episode that updates the characters and sets things into motion, the rest of the season’s first half is a bit of a meandering slog that builds to a more satisfying ending.

After the events of last season, the bulletproof Luke Cage (Mike Colter) has become an internet sensation, often followed wherever he goes by fans, well wishers, and amateur videographers who want to track the superhero’s every move. He still finds his hands full trying to keep up with the dirty deeds of Harlem’s biggest crime boss, Mariah Dillard (Alfre Woodard), the reappearance of his estranged preacher father (the late and dearly missed Reg E. Cathey), and trying to maintain a relationship with his girlfriend (Rosario Dawson, who’s severely underused). On top of that, the streets of New York have been flooded with “Luke Cage” branded heroin that has created a drug abuse epidemic. While trying to clean up Harlem’s streets, Luke finds himself caught in the middle of a turf war between Dillard and Bushmaster (Mustafa Shakir), an equally indestructible Jamaican rival who rolls into town with old scores to settle.

Much like the latter half of Luke Cage’s first season and the most recent outing for fellow “dark Marvel” hero Jessica Jones, the pace of the early episodes is slow. While it’s admirable that every episode attempts to stay on task while crafting a twisty, intricate plotline devoid of many tangents and asides, even the wealth of characters on hand can’t sustain seasons made up of multiple hour long episodes. Every episode tends to follow the same set of beats in different orders: Luke will learn something about himself, the villains will learn something about themselves, Luke will go to the same several locations over and over across the series to try and get some answers, there will be a big set piece, and the seeds will be planted for the next episode.

Within this standardized framework, there’s room for a lot of great character moments and well written chats between them that flesh out their motivations without seeming boring. Colter still does an exceptional job as Cage, cutting an imposing, likable presence that makes him stand out as the nicest of the current batch of Netflix/Marvel heroes. Woodard has her first truly outstanding role in ages as Cage’s ruthlessly cunning counterpart, and Shakir is an entertainingly menacing addition to the show’s rogue’s gallery of villains. Scenes where these characters threaten and bounce ideas off each other make the material crackle and reverberate. While there’s not a ton of action this time out, it’s these interactions that keep the viewer invested throughout. 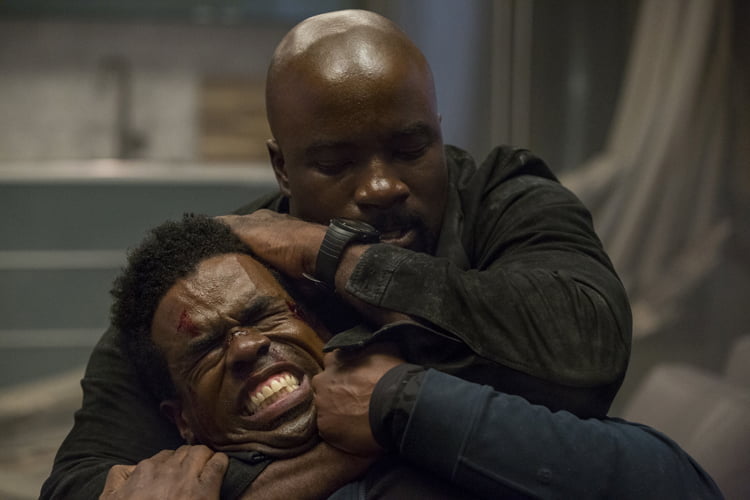 That doesn’t change the fact that nothing of any great significance happens here until the sixth episode, but you can’t really skip to that point and the payoff without a great deal of plot getting lost. The second season of Luke Cage makes people work for the truly fun stuff, and that would be admirable if the series gave something back to the viewer during that interim.

It’s a common complaint with most of the recent Marvel series that such an adherence to a single plotline across eight to sixteen hours of programming can lead to a lot of padding, and Luke Cage is no exception. It’s exactly the kind of show that would benefit from having a few episodes where the hero goes off and fights some other battle for someone instead of wallowing in their own misery the entire time. That’s what superheroes do, and while flashes of it come out here and there, Luke Cage has yet to find a single plotline that can sustain an entire series. I’m not saying every episode should be like The Equalizer, but that building half the episodes around such righteous crusades wouldn’t hurt. Not only would these moments help enhance Luke’s set of skills, but by pushing the big baddies into the background for a bit, their mystery and power would be preserved.

Luke Cage Season 2 isn’t easily watchable, but it is enjoyable for the most part, and he remains the most consistently written and utilized character in the NYC centred Marvel universe. I do fear, however, that this marks the point where the Marvel/Netflix series will start to tip into tedium if they continue in this similar direction across all their series. There needs to be a change in the near future because no series can fully survive seasons like this one without losing a considerable amount of heat.

The second season of Luke Cage premieres on Netflix on Friday, June 22, 2018.

Check out the trailer for the new season of Luke Cage: