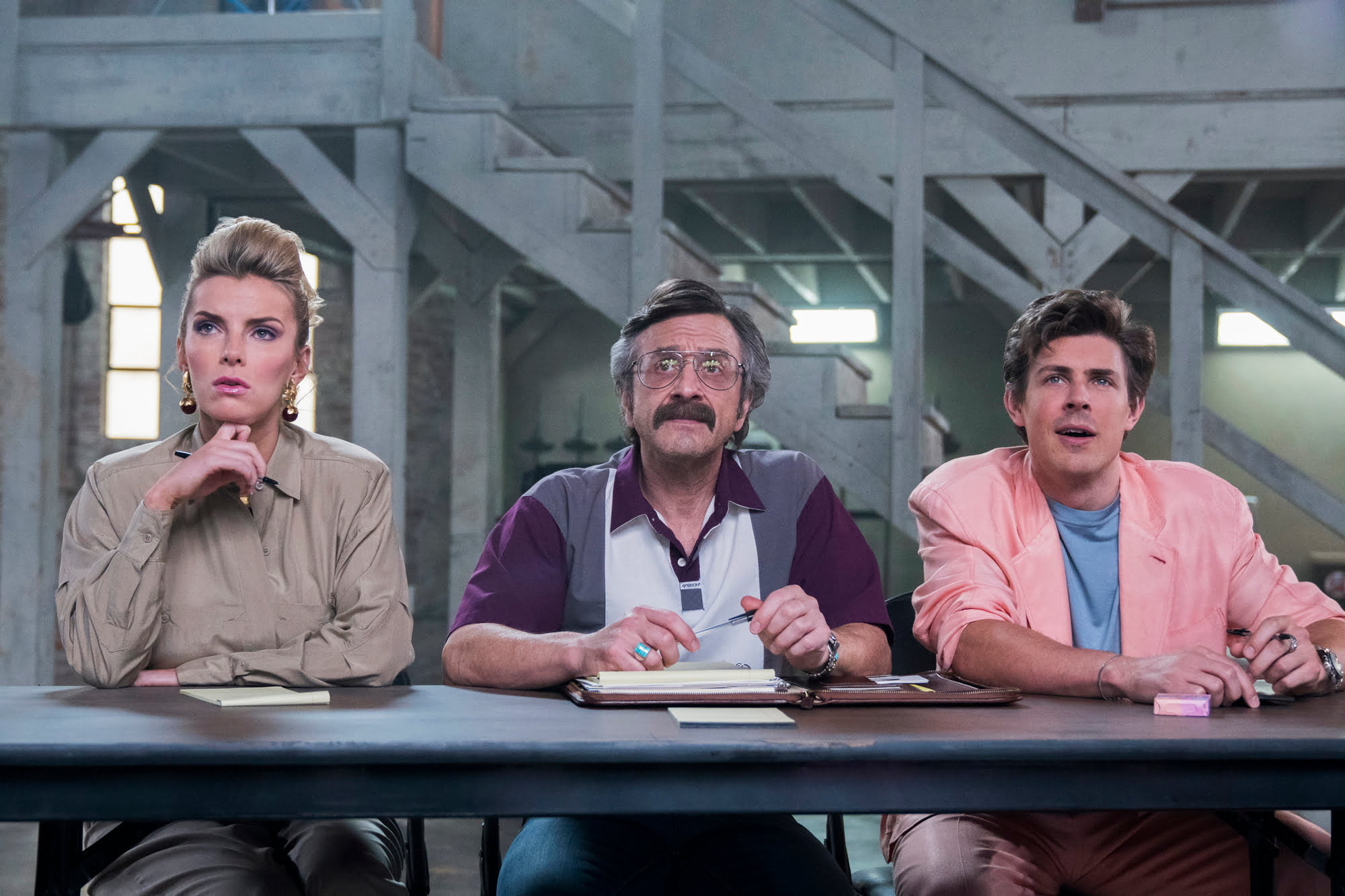 An impressive improvement on an already commendable show, the second installment of GLOW – a backstage dramedy set against the backdrop of a tawdry and kitschy all-female wrestling program from the 1980s – is the best season of any show ever produced by Netflix, period. Series creators Liz Flahive and Carly Mensch have outdone themselves with a second season that outshines their already stellar work on the previous season by leaps and bounds, balancing huge laughs and emotionally stirring dramatic beats with immense creativity, empathy, and intelligence. You don’t need to love wrestling to enjoy GLOW. You only need to recognize when you’re watching a television series that’s making the leap from being great to becoming iconic.

At first, it seems like not much has changed for the Gorgeous Ladies of Wrestling and the struggling, conflicted personalities tasked with running the fledgling Los Angeles based production. Sam (Marc Maron), the show’s “intrepid” director, still struggles to give a shit about anything that’s going on, and eager beaver Ruth (Alison Brie) might turn out to be more creatively brilliant than her boss. He’s also trying to get used to the idea that his rebellious and once estranged teenage daughter (Britt Baron) will be staying with him indefinitely. Producer Bash (Chris Lowell) is desperately trying to keep his creation afloat, while trying to patch things up in his personal life. The brand’s biggest star, Debbie Eagan (Betty Gilpin), is failing to get past her divorce and conflicted feelings towards Ruth, coping by trying to gain more control over her character and the product.

The interactions and squabbles between these characters, specifically, create GLOW’s narrative central nervous system, but there’s plenty of excellent subplots that some of the show’s more memorable side characters get to work with. In ring champion Tammé (Kia Stevens) is forced to come to grips with the implications of her stereotypical and offensive wrestling alter ego, Welfare Queen, and what it means to her Stanford attending son. Cherry (Sydelle Noelle) struggles with a new job as a leading performer on a buddy cop drama, while her former wrestling persona is given to a latina lesbian stripper (Shakira Barrera) with plenty of dance skills and few in-ring talents. Sheila (Gayle Rankin) and Rhonda (Kate Nash) have unsure interactions with zealous fans, with neither of them exactly sure of how they should handle things. Arthie (Sunita Mani) is eager to drop her character’s loathsome foreign terrorist gimmick, but her attempts to change her trajectory on the show are stymied at every turn. Everyone is stressed out, and that stress only becomes compounded by the demand to perform better in the ring and the network’s decision to shift the show to a late night time slot.

With only ten episodes that are either barely under or over thirty minutes in length, GLOW packs in just enough information and story about every character and facet of their world to make people keep watching without getting burnt out. Showing a level of storytelling craft, restraint, and nuance that most network and Netflix shows haven’t been able to replicate, Flahive, Mensch, and their team of writers, producers, directors, and cast members have cracked a previously unbreakable code. It’s hard to fashion something that’s universally hilarious and relatable from a niche topic like 1980s professional wrestling, but that’s exactly what the people behind GLOW have created. While the in ring theatricality of the characters is more of a heightened soap opera, the behind the scenes comedy and drama resounds because the people involved are real, flawed, and deeply empathetic. Even when Sam and Debbie – the show’s two most chaotically tempered people – do intentionally horrible things, the show makes it expressly known that these actions only come after long periods of internal conflict and for reasons that make sense only to them. The viewer won’t always agree with everyone, but they’ll know why these people are conducting themselves in such a manner. Unlike their in ring action, GLOW has no villains that are placed front and centre (although many lurk in the background), and it’s doubtful that these people would ever see themselves as heroic. These are human beings struggling to do a job to the best of their abilities.

As a workplace drama, GLOW is rather unique. Instead of showing how a terrible and soul sucking job can force people to find humour any way they can (a la The Office), the second season of GLOW focuses on people who have begun to love their jobs, the creative outlets afforded to them, and the relationships they have created with others. There’s a true family feeling to the love and bickering exhibited by the show’s characters that lend a perfect counterpoint to the art they create on the show within the show (which is arguably much more entertaining than the actual GLOW that inspired the series). There’s a poignancy to these interactions that feels intimate; like the viewer has been actually led behind a curtain and offered a chance to sit down and get to know these people on a one-to-one level.

The dramatic twists and turns are well mounted and integrated. Things are hinted at long term instead of suddenly snapping into existence for the sake of having a twist. Every ounce of emotional energy given off by GLOW is earned, reasoned, and carefully constructed, especially when it comes to Ruth and Debbie’s core rivalry, which comes across less like a game of chess, and more like a game of squash where the person who’s playing to win isn’t as calm at the game as the nice person who’s just out there to have a good time. At moments, they’re able to come together as friends and colleagues (a scene where the pair attempt to hash out a PSA about the dangers of teen pregnancy is a comedic high point), but moments later their insecurities will cause them to physically and emotionally tear each other apart. Brie and Gilpin are again exceptional as the show’s ostensible leads, and the writers are always careful to show how the actions of these characters will have consequences for everyone else on the show. 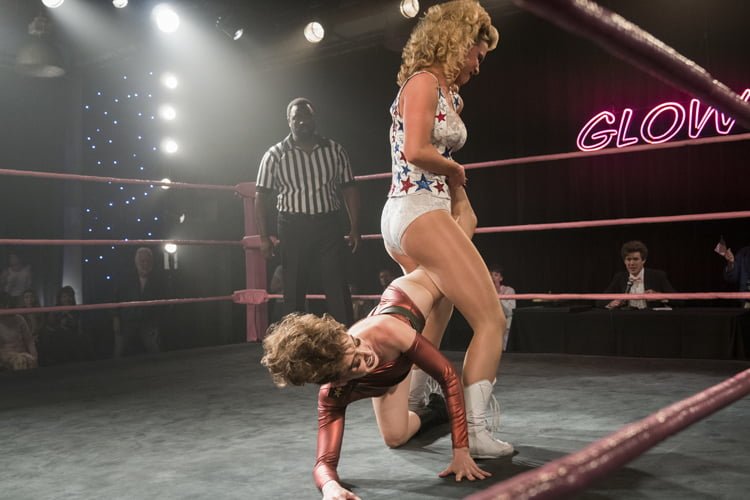 The supporting cast remains all around exceptional and perfect chosen. Maron again stands out as the show’s gruff wild card; a washed up creative type with constantly shifting objectives and feelings. Of all the side characters in GLOW’s world, the heaviest lifting this season goes to Stevens, who deserves an Emmy for this season’s episode that revolves around her character alone, and Lowell, who surprises by taking his character’s added layers and depth and running with it effortlessly. This season wisely spends more time giving backstories to characters that didn’t have as much to do in the previous season, and it’s a rare show where everyone has something to do, and every storyline either has a payoff or promise for the future.

There’s plenty of praise to go around here. Every character could have volumes written about their tics, nuances, and neuroses, or how they all play into the series’ well rounded perspectives on sexual and racial representation. It’s the exceedingly rare example of a show where every detail can spark a meaningful conversation, and the fact that it does so with a great deal of humour is somewhat revolutionary. It’s intelligently crafted without being needlessly philosophical, and fun loving without seeming sophomoric. It’s a realistic show about people working in a surreal milieu, never losing sight of the series’ humane core. Again, I doubt this is how things happened for the people working on GLOW in the 1980s, but Flahive and Mensch use their real life inspirations to have more fruitful conversations about how we consume entertainment and what it means to the people creating it.

GLOW is also a show that wisely never rests on its period trappings or potentially wacky settings for cheap pops and laughs. The production design and soundtrack are certainly spot on approximations of 80s retro excess (including shout outs to beloved snack foods like Tato Skins and Nutter Butters and a spot on recreation of a period appropriate shopping mall), but they’re meant to enhance the world of the characters rather than distract from them. The show’s technical credits are also low-key remarkable, employing plenty of elaborate uses of multiple mediums, tracking shots (especially a dazzling single take that opens the show’s second episode), and creative lighting. The behind the camera work nicely reflects the effort being put in by the above the line talent. They’re just as worthy of high praise.

I can’t remember the last time I got to the end of a single season of a television series and wanting to immediately watch the entire thing again from start to finish; deeply wishing there was more, but also perfectly content in feeling that I had been treated to an exceptionally contained and well told story arc where nothing felt like filler and I was never bored. I might have thought that with The Wire or the first season of True Detective, but those were extremely heavy shows that prompted re-watches, but not immediately after a first cycle. GLOW, like many of the best comedies and dramas ever created, and its second season in particular reaches the gold standard of some of history’s greatest series. If future installments of the show are even half as good as this, I doubt I’ll ever tire of watching it.

The second season of GLOW is available to stream on Netflix starting on Friday, June 29, 2018.

Check out the trailer for the second season of GLOW: