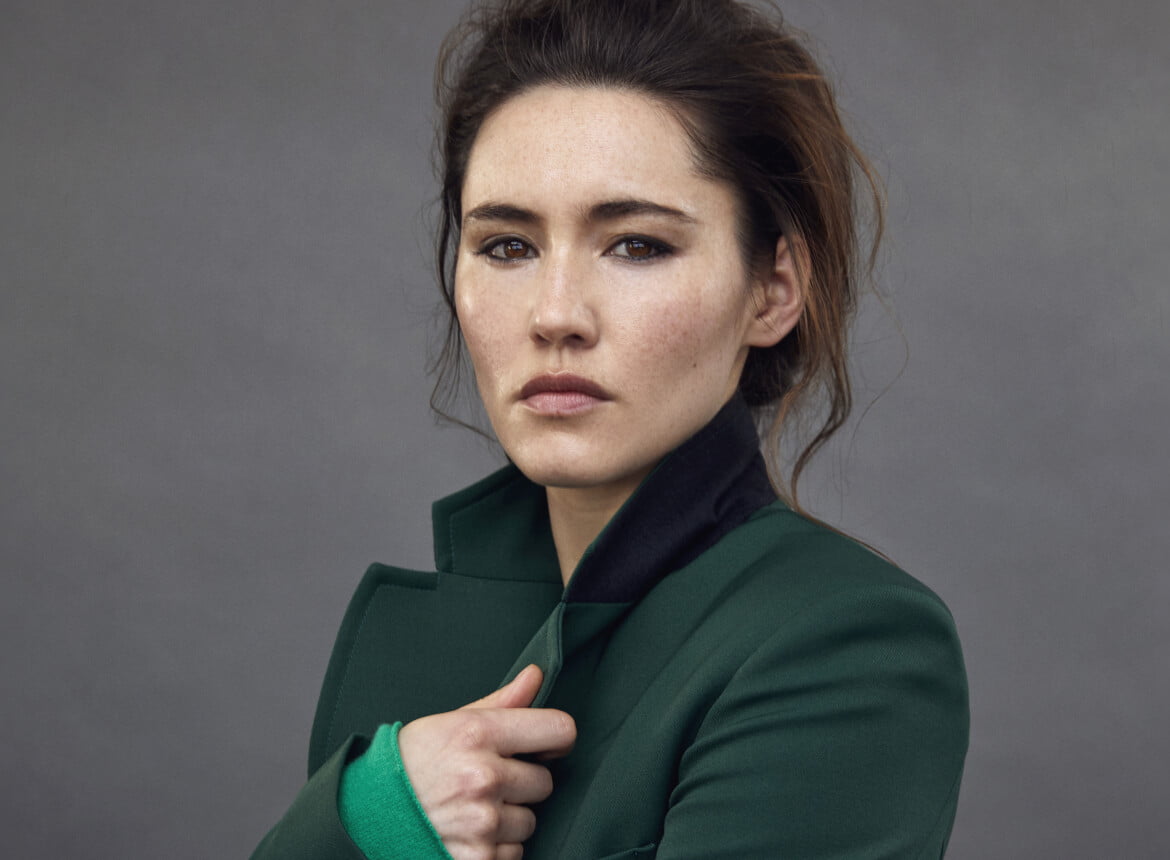 Star Trek: Strange New Worlds star Christina Chong knew she was part of something special the moment she saw the opening credits.

“It was seeing that ship, the Enterprise, in all its glory and the close ups and and seeing it go to these strange new worlds and thinking, ‘Oh my gosh, yes! We were all on that ship… being courageous and brave, to go further than anyone’s ever gone before, for the good of humanity.'”

Chong plays the smart and fierce La’an Noonien-Singh, the ship’s chief of security, working alongside Anson Mount as Captain Christopher Pike, Rebecca Romijn as Una Chin-Riley, and Ethan Peck as Spock. La’an has a fascinating backstory, and it’s one that we’re slowing unravelling while also finding out how she relates to Khan Noonien Singh.

I sat down with Chong to talk about the role, working with this incredible cast, and how La’an relates to this new family and her past. We also talked about one furry guest star that she helped introduce to the series.

Star Trek: Strange New Worlds airs Thursdays at 9:00 PM (ET) on CTV Sci-Fi Channel, and you can stream it on Crave.

I’ve been watching Star Trek since the original was in reruns in the eighties, and there’s something very unique about Strange New Worlds. It’s both old school and new age all at the same time. Were you a fan of Star Trek before you got the role or are you new to this universe?

Christina Chong: “Yeah, the latter. I can’t recall ever watching an episode of Star Trek before I started the show, but it’s amazing to me how much actually lines up with how I see life; how I hope this world to be. And the themes of inclusion, diversity, and how appropriate it is for me to be on this show in the current time.”

“I remember a few weeks back at the premiere travelling over on the plane and seeing the opening credits for the first time, and it suddenly dawned on me why people love Star Trek so much. It was seeing that ship, the Enterprise, in all its glory and the close ups and and seeing it go to these strange new worlds and thinking, ‘oh my gosh, yes, we were all on that ship… being courageous and brave to go further than anyone’s ever gone before, for the good of humanity.'”

“So it’s been a really interesting journey for me. And I’m glad it happened this way around because if I’d have gotten the job being a fan, I think it would have been a bit too daunting.”

She’s such a great character. I love how tough she is; how did you approach playing her? Do you think that she’s tough because she has to be, or is it a learned toughness, or how would you describe her?

“I always, with all my characters, I like to personalize them and use elements of my life and put them into the script. And, look, on having been through this super traumatic childhood, she has PTSD, and for her, when you love people, her experience has been that they die and she’s been left alone and she’s the only one to survive.”

“So moving forward, we all have elements of protecting ourselves, self-preservation, and I think because her trauma was so huge at such a young age, those walls are even harder than perhaps you or I. But, we all have it, and it’s all relative, you know?”

“So for her, it’s having lost everyone and then being found by Una, and being guided to this, what is essentially her new family; everybody, all the crew in the Enterprise, are her family.”

“It’s the fear that that could happen again, and that’s why we all protect ourselves. It’s the coping mechanism that you need to switch on in order to live or in order to just survive–which Pike says, there’s surviving, and then there’s living–so full on that protection. That facade is if I get too close to this new family, if I allow them to break through my walls, if I let my guard down and let them see my vulnerability, then I may connect with them also on a deep level and they may die again; that fear of it happening again.”

“So she’s kind of taken on quite literally the job of protecting her new family so that history doesn’t repeat itself.”

I love that idea of family because as fans, many of us have seen how every Star Trek crew becomes a kind of family, and it’s daunting because we also know there’s bad things coming for at least a couple of these characters. What would you say her journey is this season that you can share?

“Her main obstacle to overcome is her trauma and learning to live. So the way she does that in this season is quite literally by facing it front on, and I think it’s only once she does that and overcomes that–and succeeds without losing her core family, her new family–then that is when she starts to think, ‘Okay, maybe Pike’s right. Maybe I need to start being more vulnerable; let go and take risks.'”

“So that’s her main journey, and part of that journey as well is also recalling her trauma and the shame that she’s carried from being related to Khan, and there’s two elements, that will kind of build up to one.”

“But the shame of being related to Khan, then also there’s a journey there where she’s starting to accept; when Una accepts who she is, and kind of opens up and is like, ‘yes, this is me, this is who I truly am.’ I think it gives license [for La’an] to say, ‘Okay, yeah. If you can do that, then maybe I can accept who I am as well.'”

Can you talk about the cast? Because this group of people is so incredible on screen and I can only assume they’re incredible off screen as well. What are they like to work with?

“Oh, yeah. I mean, they’re not that far off from their actual characters, to be honest.”

“So what you see on screen, like how we are with each other… maybe I am a little bit more reserved, which La’an is [and] I’m also British as well. So, that’s the thing.”

“I think everyone is incredible, and what I love about it is that we all bring something unique and different. I don’t think the audience is ever going to get bored watching Strange New Worlds because with the episodic format, every episode is kind of focusing on one character, and you get a little bit more in-depth backstory and then we go to the next episode and now it’s going on somebody else’s backstory.”

“But you still get the trickle of of everyone else’s progression and their arcs, so it’s very clever how they’ve done it. The writers, I’m realizing now, as we’re getting the feedback, how much detail [they’ve written]. They all are fans, so of course they really care about, and I’m sure they are really stressing over like canon and things like that, and how not to upset the fans and to make sure that they’re loyal to the whole franchise.”

“But it’s incredible how they’ve managed to build these characters in this episodic way, making it so it’s almost like a different genre every episode in a way. They’ve still managed to get that amazing through line for everyone, and the detail in it is just incredible.”

I heard in another interview you say that you’re dog is in episode eight. Can you could you talk a bit about this because that’s amazing.

“Runa, I bring her to work most days and everyone loves her. Everyone loves it when Runa turns up and I was kind of making up this Instagram account for her and I was giving her this little personality and was like, ‘oh, she wants to be on the show, but mommy won’t let me audition,’ you know?”

“And then my makeup artist was kind of seeing this, and she’s like, ‘Well, why don’t you ask?’ And I was like, ‘Yeah, good idea. They can only say no.’ And my kind of philosophy is that if you don’t ask, you don’t get, so I was like, ‘Yeah, okay, I’ll ask.’ So I asked Chris Fisher our on set, director, producer, and I said, ‘Hey, what do you think?'”

“I wasn’t expecting him to actually pitch it to Henry, but then when episode eight came out and she was in it and she features in it quite a little bit. She got her close up and everything, it’s even her voice in ADR, or additional dialog recording.”

“I realized that they were [at first] using a phony, generic dog sound for Runa, and I just said, ‘Do you reckon, could I get her to do her own ADR?'”

“And they were like, ‘What, will she be able to do it?’ And I was like, ‘Yeah, she will.’ So they put the microphone down on the floor and she’s tiny. She’s 9 pounds–not even–and she sat in front of the microphone in the recording studio and I got her to make her own sounds.”

That’s amazing. Well, I can’t wait to see the episode.