‘Food, Inc.’: Dinner with the enemy 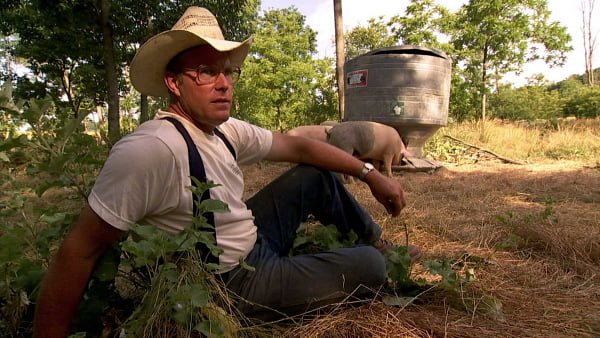 Joel Salatin in a scene from 'Food, Inc.'

Looking back on 2009, I’ve been making notes on all of my favorite films of the year, and while I can’t really count Food, Inc. as one of the best DVD or Blu-ray releases, since it had little in the way of tremendous extra features, it was definitely one of the best documentaries.

Before I even watched the film, I knew that it was going to bother me, but Food, Inc. seriously got under my skin in a way that I didn’t expect. There were a few scenes showing how animals are treated as they go to slaughter, and they’re vile to comprehend, but none of them bothered me as much as learning how insane America has become in terms of food laws and patents.

I knew some of the details going in, but not enough, and everything I learned hit home in exactly the way the filmmakers probably bet on: I felt like a victim of big business operators who have done what they want to make more money.

That feeling is something I hope can be used to motivate more people to change what is going on out there in grocery stores, supermarkets, and, dare I dream, farms across the continent.

Now, I have to say, I’m not naive. I know Canada has its issues with food production, but I guess I find it comforting to know that our government is a little better at facing issues that affect our national health. The question does hit me pretty hard though – how much of what I saw in Food, Inc. applies to Canada?

Most of it? All of it? I’m not entirely hopeful, but I do suspect we’re not quite as bad about letting corporations run wild in the streets.

What I really wish though was that there was a film like Food, Inc. that looked at Canada’s food issues specifically. Or maybe I just need to read up a bit more on the topic to get a better grip on it. Over the years I’ve certainly read a number of news stories and seen segments on TV, but I still don’t really feel like I’ve got a grip on it all.

All I can say is that the farmer featured in the film, Joel Salatin of Polyface, Inc., is all kinds of awesome. Makes me want to find that kind of farmer here in Ontario. Does anyone have any suggestions?

Otherwise, if you haven’t seen this film, check it out. If you eat food, and yes, even if you’re a vegetarian, this film is an eye-opener.