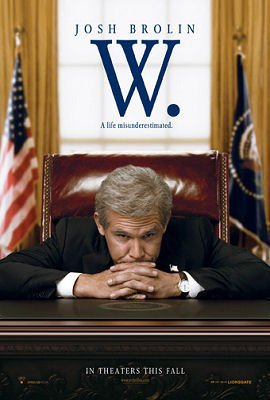 Twenty five double passes are up for grabs in five cities across Canada, including Toronto, Victoria, Ottawa, Halifax, and Winnipeg. Three winners in each city will also receive a GATE t-shirt with extra swag from our prize locker.

All screenings will take place on Thursday, October 16th, and winners must have their own transportation. One entry per mailing address.

W. arrives in theatres on October 17. Visit the official website at www.wthefilm.com.

The Synopsis: Whether you love him or hate him, there is no question that George W. Bush is one of the most controversial public figures in recent memory. In an unprecedented undertaking, acclaimed director Oliver Stone is bringing the life of our 43rd President to the big screen as only he can. W. takes viewers through Bush’s eventful life – his struggles and triumphs, how he found both his wife and his faith, and of course the critical days leading up to Bush’s decision to invade Iraq.